@beehiver24 53
about 2 months ago
STEMGeeks

Today's world where we live today,is much more tech driven that we can now bank on the generosity and offerings of it largely than ever in the history of science.

I always ask myself, what is the driving force that can change our life to a new extent, solving all our problems, making solution to the age old crises, creating a new path for growth & development.
Every time my mind says, you have your brain and an invisible force which lay the foundation of science, foster the sense of logic to ground your reasoning, in the end making discoveries to meet our needs.
I say, wow!! That's what the hidden magic behind science & technology. 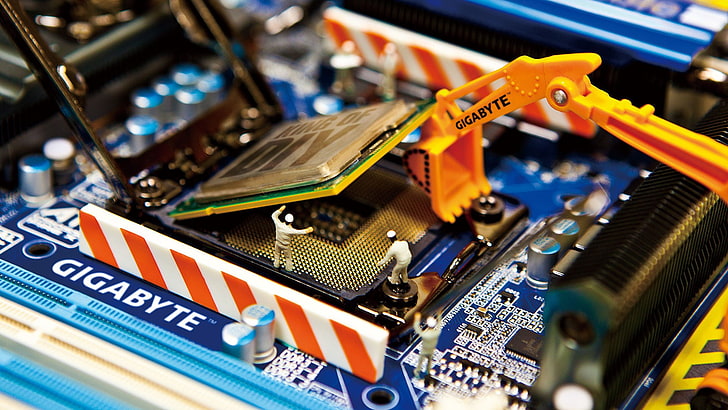 One of the key things that worked as a key and principal ingredient of todays smartphones that we use, is the innovation journey of microchip.
I was long been fascinated with this small discovery and the way it was created initially. When I think about it,the endless times passed on the research Laboratory, endeavour effort to come out successful, and ultimately getting to reach at the climax, make things wonderful.

The innovation journey of microchip began with a neat idea to empower the phones and modern electronic device and equipments, raising the productivity of these items, sustaining an artificial intelligence method, key components being accumulated, and a question in mind that what we can do with metallic slots.Then the scientists worked for it schematically and ultimately found it to perfection.

You all have the basic idea what a microchip really is. Its a set of some electronic circuits on one small plate or rectangular shaped board and the sillicon circuits , a fantasic semiconductor substance, with few coils and rounded objects and battery adapters in mini size. Since, I am a physics student, so some day, I will describe the concept of semiconductor technology and transistor, the way it works well in all modern devices.

There were times, when I used to talk to someone over the telephone, a large box of it which takes a large space, because the telephone was in its infancy.Motorolla telecom company produced the button phones, and the Korean and chinese company tried to establish a more sophisticated design of it, Apple came up with the smartphone technology and revolutionized the way we communicate with each other now.

But, the whole modern electronics are solely indebted to the invention of microchip. Because, whatever the processor you would use to create the machines, you have to take the help of semiconductor microchip.
Microchip was first invented in 1959, but it didn’t really start to take off until 1980's.Since then the ages of clock's ticking started, microchips have made it possible for them to be cheaply and efficiently used for calculators, personal computers, pet identification, automatic teller machines, satelites, pacemakers, cell phones specially smartphones, and the microwave ovens among many othe products.

Yesterday, I was sleeping and a white cat entered my room. It was in search of stealing some foods, and I kept some puffed bread and a glass of milk in the corner of a table. Then, suddenly, instead of snatching the foods, it ran down fast and collided with my digital calculator. With some force it fell from quite a great height and broke into multiple pieces.
I was quite angry but I didnt do anything to thay cat.

I later tried to take an autopsy of the broken calculator with neat tools, screw driver and pinching machine and enclosed the microchip of it.
It was a nice piece of chip with micro sized circuits and gates. I am currently, trying to do something with it, a repaired project like something and hope that, I will do something with it.

Congratulations @beehiver24! You have completed the following achievement on the Hive blockchain and have been rewarded with new badge(s) :