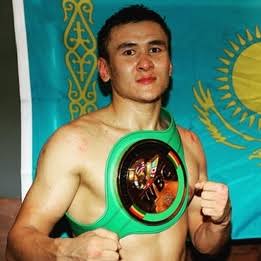 Hello guys, as you all know, I have made some posts much about some boxing prospects to watch out for so this one right here also fits the category, he is truly a remarkable beast, watched some of his fights and trust me, he is going to do so well, so let me go ahead and introduce to you Tursynbay Kulakhmet.

Hee is from Kazakhstan, is 27 years old and fights in super welterweight. He is undefeated with a record of [3 (2Kos) -0-0]. He has only been a professional for a few months, but he does have extensive amateur experience, reaching bronze in the 2019 World Cups and champion of the Asian Games.

He is a left-handed boxer, who boxes with great pressure and with a lot of speed and explosiveness in his punches. Especially with the left of him shifting he hit the body and head. He is also quick on his feet to back up and sideways. For me he is a 9 out of 10 in the future. And despite the few professional fights that he has I think he will be a very difficult opponent for anyone in the short term. Another more than him joins the many already in 154lb.