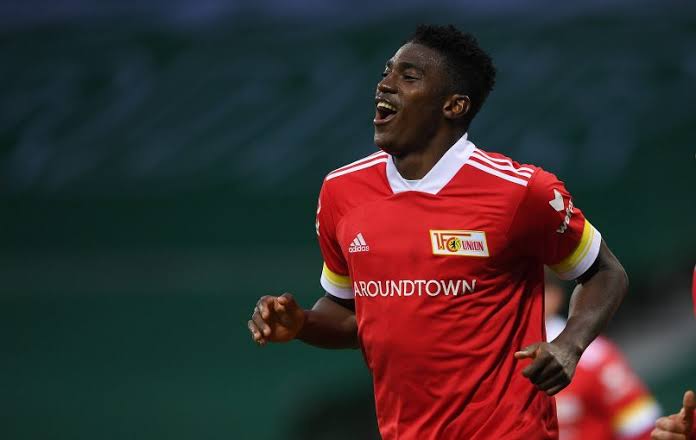 Taiwo Awoniyi who is a non known player of Liverpool since 2015 have been sold, It is probably the few who have heard of Taiwo Awoniyi, and that is because he has never played a game for Liverpool, but he has now been sold to Union Berlin.

Taiwo Awoniyi was on loan at the club last season and that has led to a permanent switch. According to media, the Germans team have paid around €6 million and given Liverpool a resale clause of ten percent.

Taiwo Awoniyi has never played a match for Liverpool and that was because the striker has never been able to secure a work permit in England. Therefore, he has been loaned out in all seasons since the change in 2015. During the six years he has played for FSV Frankfurt, NEC Nijmegen, Royal Mouscron, KAA Gent, Mainz and most recently Union Berlin, where he played 22 matches, scoring five goals and three assists last season.

This is a fantastic move for my country man. He is an awesome striker that i so much i have a lot of confidence in him.

It is better he plays for a club where he would have more playing time than playing from the bench. I believe he will had lot of things in him that many are yet to discovered

This the best tin for him, because i dont see him breaking into that liverpool team.He is very strong and energetic player.i wish him the best on his permanent move to union belin.

This is a great move for him because I do tells people that when it come to football, player needed a playing time for him to improve his skills and fitness.
When it I is an non known player to Liverpool and he make a move to German side I think he gonna be the player that big club will be lookin for in the nearest future.
I think this the best for him for his football carrier
Good luck in his new club

Sad to see how life has been moving against this talented young Nigerian forward. I remember he showed great prospect years ago at the Under 17 category for his country. Too bad the work permit didn't pull through and stopped him from featuring at the Liverpool. That must be some black magic at work from his village :-). Hope he breaks it off though at his new club.

Been just 23 years old. He still got a lot more time to prove himself. His move to Union Berlin is not a bad one has the Club is still in top tier League in Germany. He could also get to feature more if he keeps impressing the coach with his performance.

Hope he find his way back to the football fans once again by banging in them goals has he ought to be doing. Would be closely following his progress at the bundesliga side in the coming season. Wish him all the best at the German club.