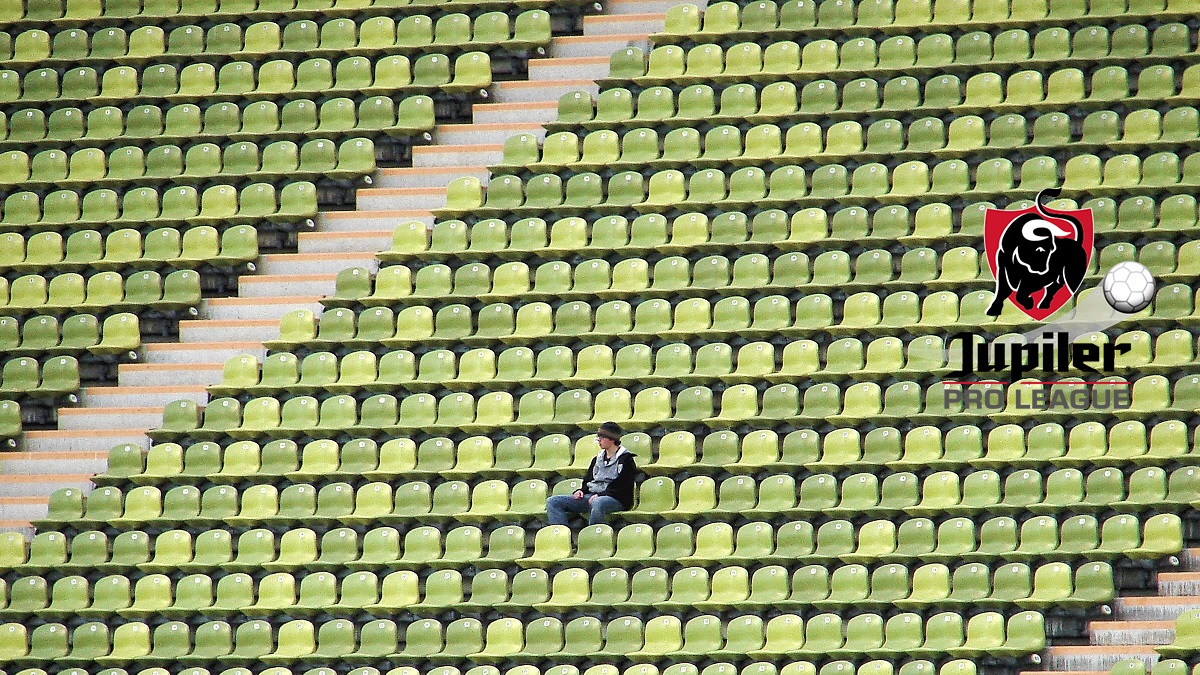 Pretty solid Saturday with the main position on Zulte Waregem as the +1 underdog winning outright. Today is the last day before the winter break so there won't be previews for a while and most of my focus will go toward the Clash Of Streamers Play2Earn game making a lot of content about that. For now, these are the previews on the 4 matches for today... 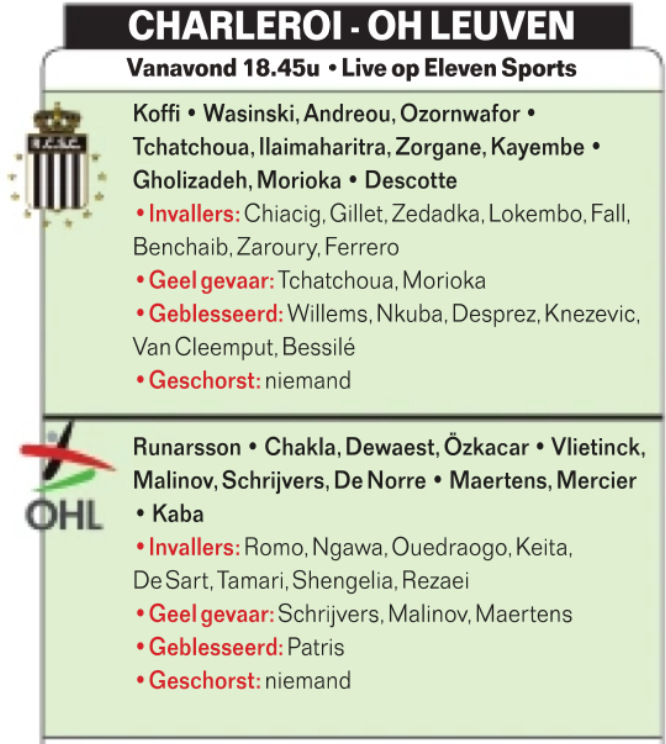 Charleroi lost their top striker Nicholson who made a transfer to Spartak Moskou. He scored 13 out of their 35 goals and I see it as quite a big blow. Most of their goals tend to come in away matches where they don't have to make the play and at home, they are actually 2W-6L-1P on the over line with their top striker that is. In their first halves there was only an average of 0.44 goals. Overall they are a good team with a solid defense and they have been in ok form. OHL is one of those teams that on average isn't that impressive but they can win any given match as they won 1-3 against Union a while back. They are also quite good on the counter and matches that look quite boring out of nowhere often have a ton of goals mostly later in the match. I would not be surprised if OHL started the match with intentions to mostly play on the counters and Charleroi taking initiative without taking all too much risk missing Nicholson as a scoring striker. I'm comfortable with a 0.4 unit pre-game bet on 1st Half Under 1.25 @ 1.846. Charleroi as a teal at home is 8W-1L on having at least 10 corners, Leuven away is 5W-4L on that so it's certainly something I will keep an eye on. The odds on the corners over at the moment are not high enough for me to take the risk. OHL against non-top teams won the away corners outright 4 out of 5 times while Charleroi at home only covered a -1.5 corners handicap line 2 out of 9 times. This made me also take a 0.4 unit bet on OHL Corners +2 @ 1.885. 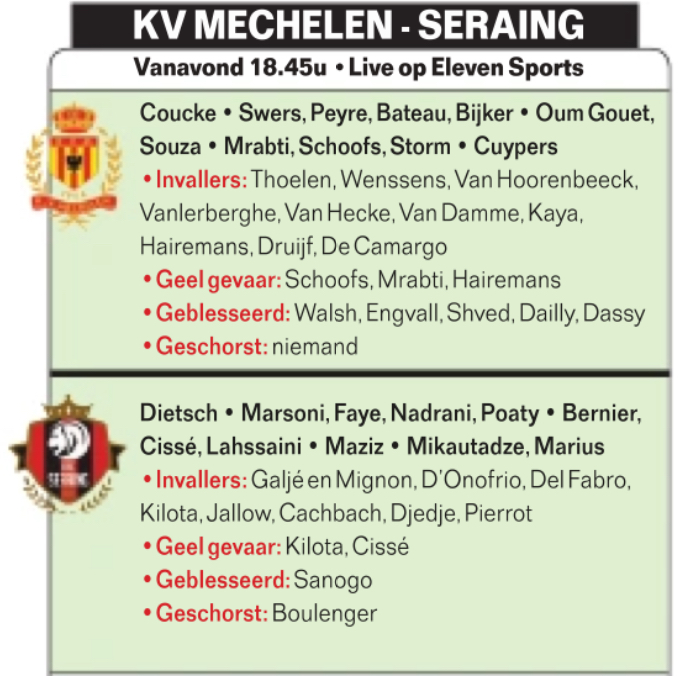 Mechelen remains a team that is capable of the best or the worst and it's hard to predict what it will be. They have been playing quite well but still only managed to win 1 out of their last 5 matches mostly because they had a quite tricky and difficult schedule. Both Schoofs & Cuypers will be back in the team today who are important. Seraing now lost their 4 last games and especially away they haven't been best. I see the chance of this match turning out in a pretty straightforward home victory high enough to take the risk of splitting half a unit between Kv Mechelen -0.5 @ 1.813 (0.2 units) | Kv Mechelen 1H -0.25 @ 1.92 (0.15 units) | Kv Mechelen Team Total Over 1.5 @ 1.666 (0.1 units) | Kv Mechelen -1.5 @ 3.03 (0.05 units). Mechelen at home is 5.5W-3L-1.5P against the over line, Seraing away is 5W-1W-4P against the over line and I do expect a quite open match. For now, I'm waiting to possibly get in on the FT over. 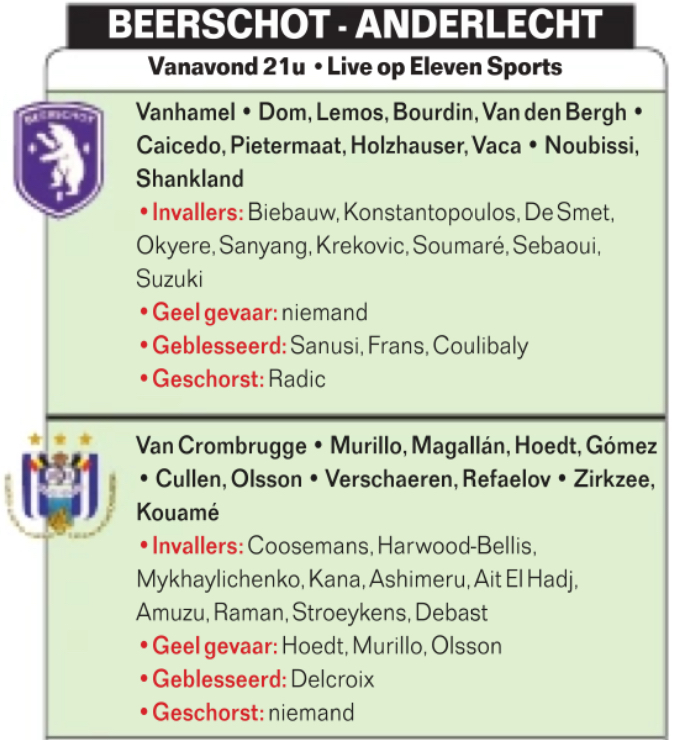 Beerschot looks dead right now being 10 points behind on a bunch of teams that all will take points still with 14 matches left for them this season. Overall their play also just hasn't been good enough and they create too little. They had a brief winning streak going WDW but since have lost 4 matches in a row not having scored a single time in those. This can go both ways in that they either just drop all hope or that they drop all fear to lose and just go for it. Since they lack quality, I won't be betting on them all of a sudden starting to play great because they have nothing to lose. Anderlecht has been solid as of late and one of the better teams in the league actually. Kompany seems to have found his starting 11 and he has been playing with the same team for some games now. Once they managed to score the first goal, more tend to come easily. They also qualified in the mid-week cup match against Kortrijk. Overall everything points toward a win for the visitors and the question is if the odds are worth the risk as the match still has to be played (and with Anderlecht, you never know). My plan for this match is to slowly cost-average my way into Anderlecht & Anderlecht Team Total Over as I expect the first goal will be the hardest. The last 6 home matches of Beerschot all had at least 11 corners while the last 3 away matches from Anderlecht also each had 11 corners. This made me take an initial bet of 0.25 units on Over 10 Corners @ 1.950 as I do see it as a match with offensive intentions and corners on both sides. 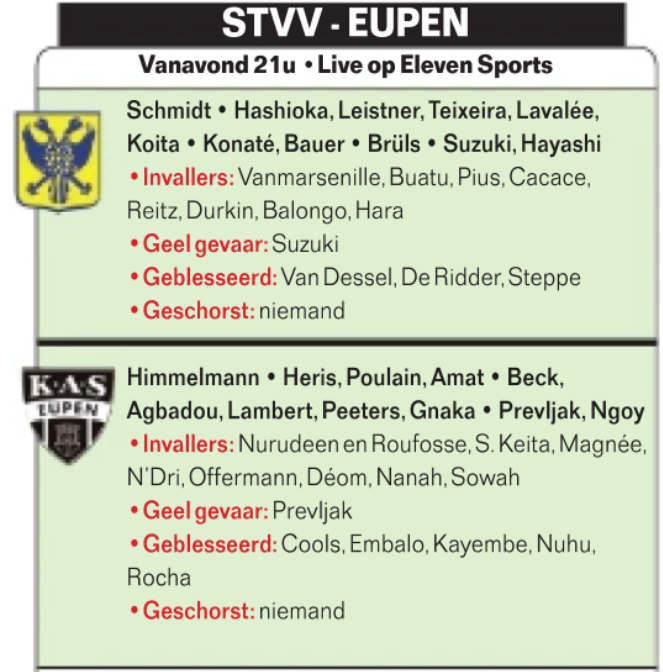 This is a match between 2 teams that have been in a big decline lately in the league. Eupen only managed to win 1 out of their last 7 matches in the league which came against Beerschot. Their losses were mostly against mediocre teams. They did play a Cup match in the mid-week against Mechelen and took a surprise win. Sint-Truiden straight up lost their last 5 games which got them to place 16. Their last 4 matches however were played against teams in good form and they never really were blown away. The total is quite deceptive as you would think both these teams are underish, yet they combined are 11.5W-4L-4.5Pagainst the Asian Over line (home/away). This with an average 2H ratio of 38%. I would not be surprised if this match started with both teams not taking too many risks and some fear to lose with things breaking open in the 2nd half or after the first goal was scored. The odds with Stvv on their home artificial pitch being the -0.25 favorite seem about right. I'm staying away for now, No Pre-Game Bets Late info might change my view on what is written in these previews. I will cover these matches live in our SBC Discord Channel. All my bigger pre-game & Live bets can automatically be followed on Copytip. Pre-Game Preview Bets I share many of my pre-game bets in all my preview posts as bold selections which are all counted as 1 unit flat bets. See these just as info and not as actual betting advice. Last season I had 236 of these selections which went +13.96% ROI (See Post). So far this season I had 98 bets which unfortunately so far saw a -2.75% ROI.