@costanza 74
about 2 months ago
LeoFinance

I am getting more serious about playing the Sorare.com NFT Fantasy Football Game this new football season and will be keeping track of my personal activity in this series of posts.

One of my core strategies to (hopefully) make long-term profit with Sorare is to pick up cheap players that are undervalued based on injury or bad form which was what I did with Odidja in August. Now he's in the team and important putting up good performances which allows me to sell the copies I picked up for a lot more. 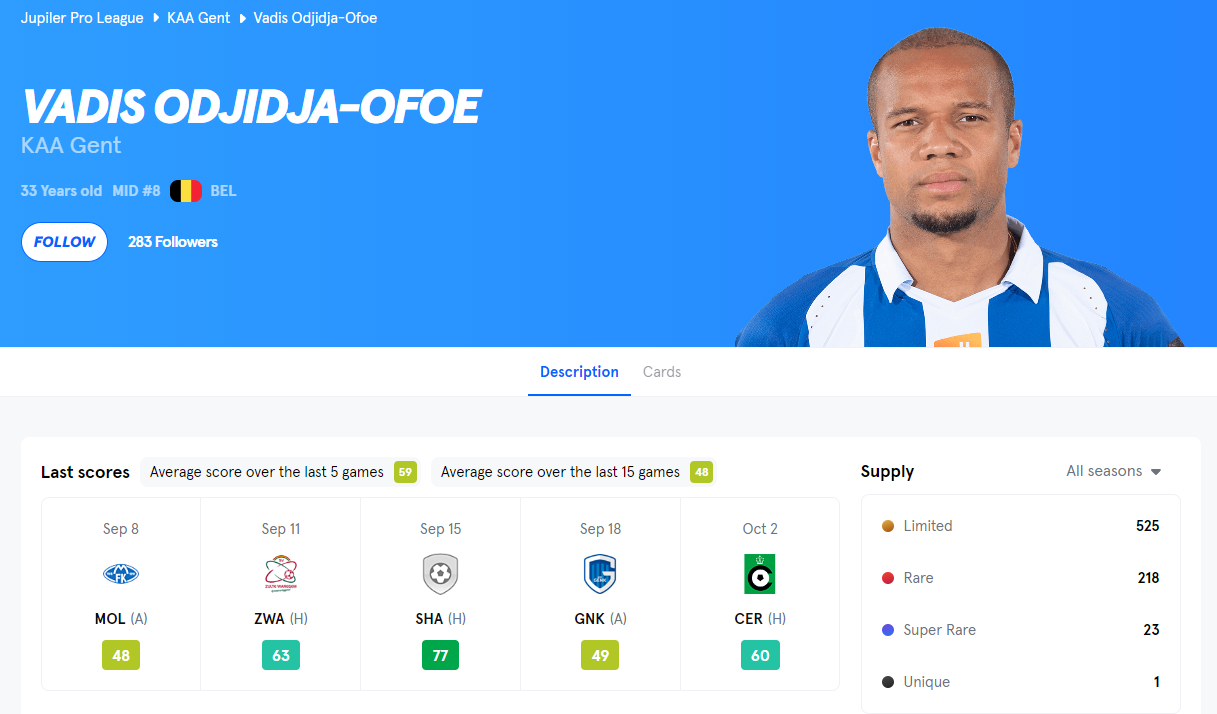 I aim to make more of these trades and am looking to ramp things up a bit in this regard as there is a lot more to be made with trading compared to the actual football fanatsy game.

Consistency is something my players right now don't really have and it remains really hard to field the players that score best in their position. Yaremchuk as my main striker so far has disappointed as he usually starts on the bench since Jutgla turned out to be a really good player that always starts. He likely won't stay long with Club Brugge which is the time Yaremchuk normally will take over. There are also many matches and I do expect him to start this week as he didn't even come in during the Champions League match. My Secondary team remains chanceless as I don't have a 2nd playing Goalkeeper. 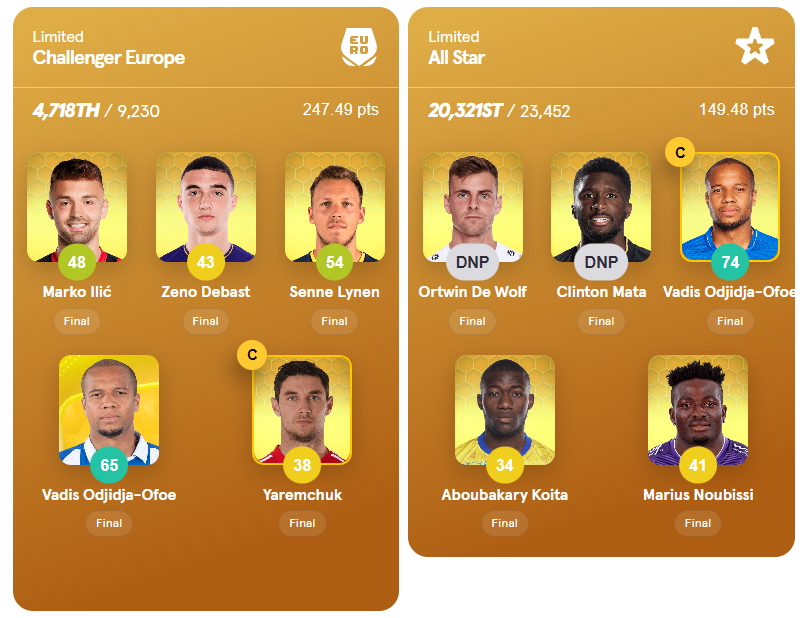 I added 2 copies of Darko Lemajic from AA Gent for 2.19€ and 1.07€ which feels like a steal. He's a central striker that turned out just too light for AA Gent but I do see him as one of those players that could be really important scoring plenty of goals. Right now he's injured and gets passed by the coach and he has a contract that ends mid-2023 which makes it possible for him to do a transfer and actually play. I bought my original copy for 12.37€ at the time it looked like he was going to get his chance to become the 1st striker for AA Gent but it didn't play out as anticipated.

I will likely be keeping him for a while hoping for a scenario where he gets in a team at some point, he's 29 so he's got enough years left in him. 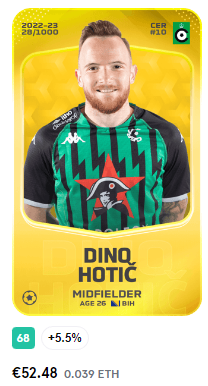 I also bought a copy of Dino Hotic from Cercle Brugge mostly with an eye to improve my rankings even though I never really wanted to play that 'pay2win' aspect of the game. He is basically the best player of the team and the first one the coach will put on his sheet. He plays as an attacking midfielder and scores his share of goals also taking the penalties. Cercle Brugge is an underraned team and I do expect them to go on a run having to play against Eupen / Seraing / Charleroi / Kortrijk / Stvv / Mechelen / Westerlo after they play Union who had an European Game. Cercle also broke their streak last week with a 3-4 win against AA Gent where Hotic was the best player of the game. So I'm hoping to just use this card the coming months and sell hopefully at least for the same price or better afterward. I did pay 52.84€ for him.

Another week and another chance and I do feel my team is enforced now with a bit more reliability and I'm hoping all players will be fielded to get some good points. If Yaremchuk gets his chance and manages to score for Club Brugge it should really give me a fighting chance for a paid spot as he has a +30.5% point multiplier. 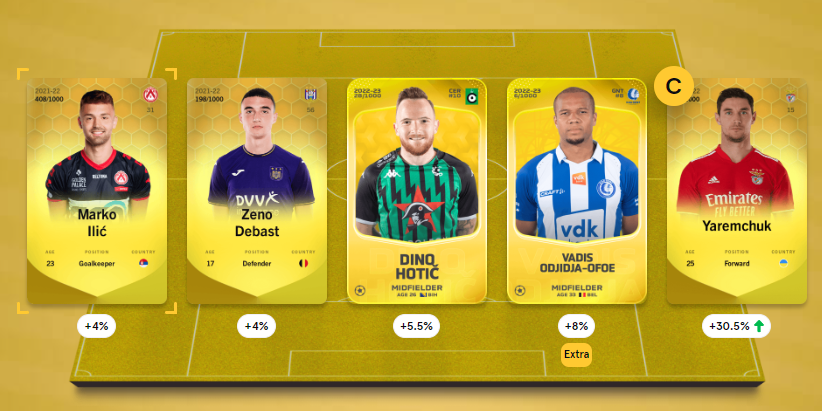 Same Story for my backup team and I will be looking for another affordable goalkeeper going forward even though it likely won't change much to get inside of the paid spots. 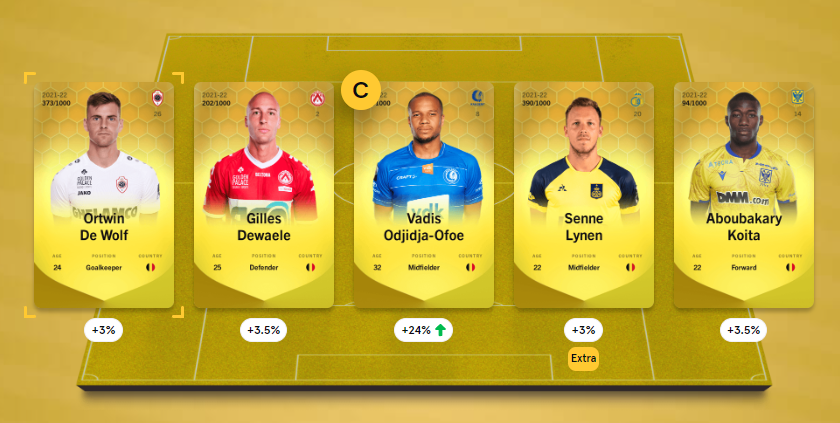 I also submitted 4 other teams and 1 training team once again mostly just for the purpose of getting more player experience.

It was a prettty poor week for card values as I'm down quite a bit compared to what I put in so far. However, I'm quite confident that over time things should start adding up to put me back in the green especially if I continue to manage to do profitable trades.

I'm doing the recalculation every 2 weeks as it takes quite some time manually now that I start to own more players.

I'm still having fun with Sorare and will continue to work my way up to hopefully getting some better results over time while doing some profitable trades. Anyone that is interested in joining me on my Sorare Journey, Using my Sign-Up Link will get you a free Limited card on buying once you collected your 5 first auction cards.

I'll bring an update next week with the results and how I'm moving forward.