I am getting more serious about playing the Sorare.com NFT Fantasy Football Game this new football season and will be keeping track of my personal activity in this series of posts.

My results these past couple of weeks continue to just be nowhere it it shows to be a real challenge to get even anywhere close to the spots where prizes are given out. I also don't have any intention to invest heavily to get there and instead just have fun with it trying to pick up some cheaper players to sell them hopefully for more at a later date. I'm also fully skipping on the new NBA Expansion and mainly just stick to the Belgian League.

I had enough players for a U23 team but was missing a goalkeeper so I bought the cheapest one I could find to fill that spot. This, however, leaves me with fewer options for the other teams but it should level up the player cards faster.

With many matches being played which causes many substitutes and some of my players being semi-injured it's almost impossible to put up a team where each player has a somewhat ok performance. This both makes it quite frustrating but also gives that fun factor of wanting to do better. 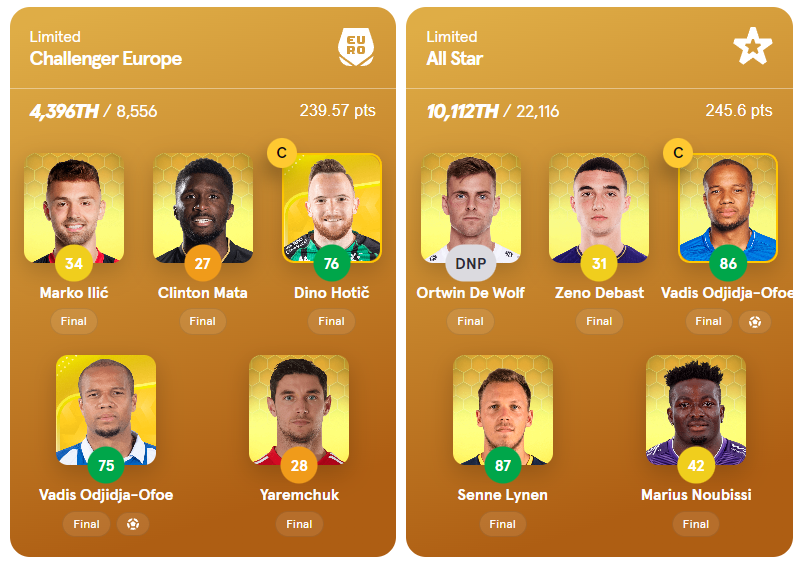 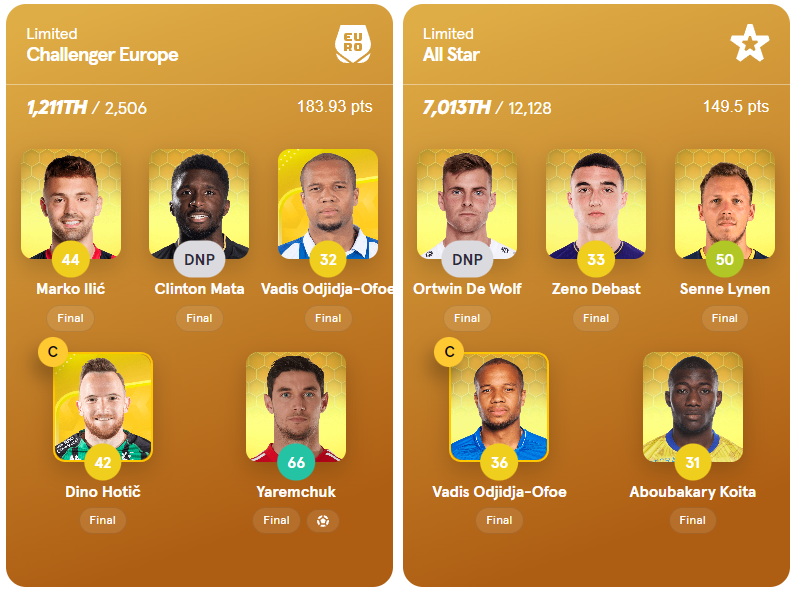 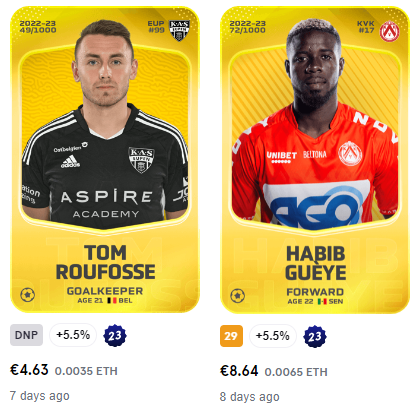 I bought 2 new players the past weeks.

Top Roufosse which basically was the cheapest young goalkeeper in the league for 4.63€ to complete my Under 23 team.

Habib Gueye: Who seems to be back as the main striker for Kv Kortrijk. I bought this player for way more at the start of the season anticipating him to score regularly as the top scorer they missed the season before. Somehow he got out of the picture which made the price go way down. He also fits in a under 23 team and I'm hoping on a hot streak from hit at some point.

I anticipate Yaremchuk getting his chance again as a starter in the league against Oostende and if he scores he should be good for a lot of points. Defender Mata remains the biggest liability as he has an uncertain injury. If he plays though, he should be good for some solid reliabla points. 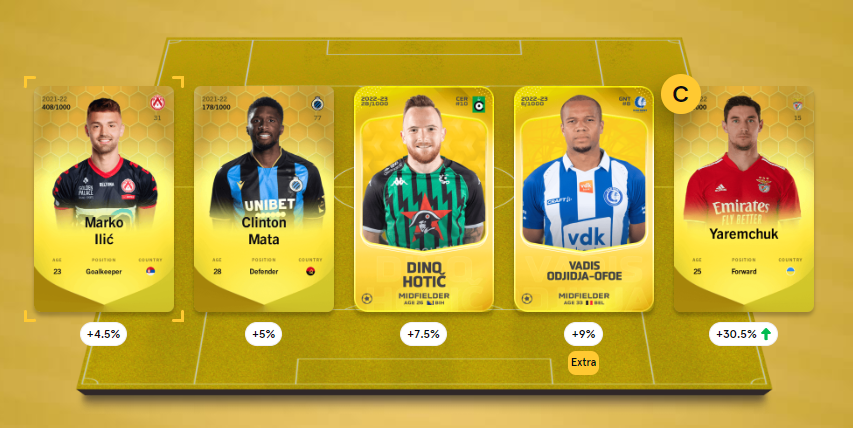 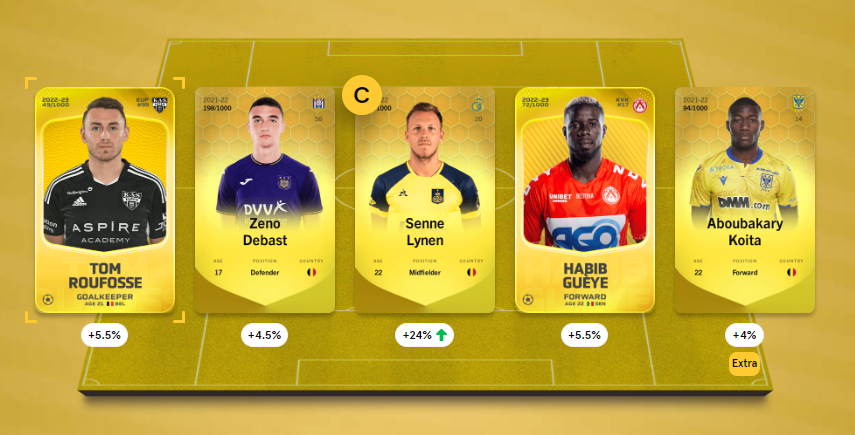 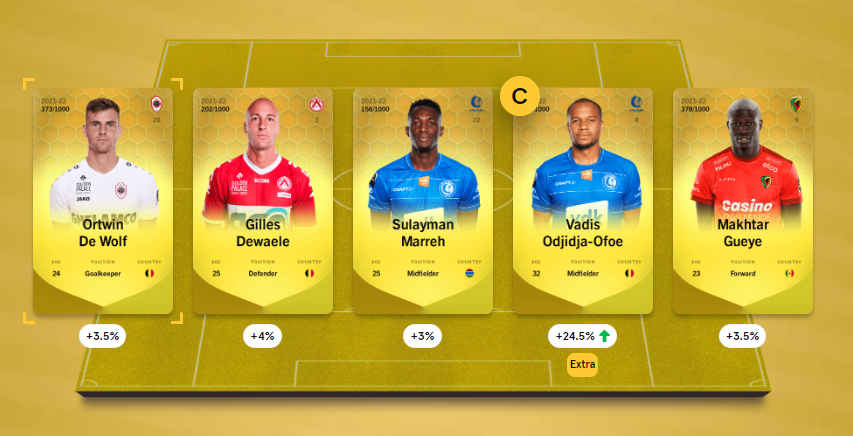 I'm doing the recalculation every 2 weeks as it takes quite some time manually now that I start to own more players.

I continue to have a lot of fun with this game and each week feels like entering a lottery which I see play out during the weekend while watching the games. Anyone that is interested in joining me on my Sorare Journey, Using my Sign-Up Link will get you a free Limited card on buying once you collected your 5 first auction cards.

I'll bring an update next week with the results and how I'm moving forward.

When I was looking at the current value of the cards compared with your purchase price I did get a flashback to Splinterlands, where it also seems to be impossible these days to make a profit with the cards.
One of the reasons I decided not to play the Sorare game.
Good luck! No cheap Genk players available?

When you zoom out Splinterlands actually has been crazy profitable, I do think for Sorare if I just continue playing while enjoying it the coming years it will also turn out profitable. Fact remains that we are in a bear market right now. For as far as Genk players goes, I'm mainly looking at Leysen who is 2nd goalkeeper and Oyen who one day will return from injruy. If I spot those at dumping prices I might jump on them. Otherwise I wanted to pick up Onuachu but hesitated too long while he was affordable when he wasn't in the team early on in the season. Right now he's too expensive for me.

I'm quite sure you would enjoy Sorare as a game aside from potentially making a profit in the end or not. It really adds another layer to following the league and watching the games while there is very little time requirement unlike Splinterlands.