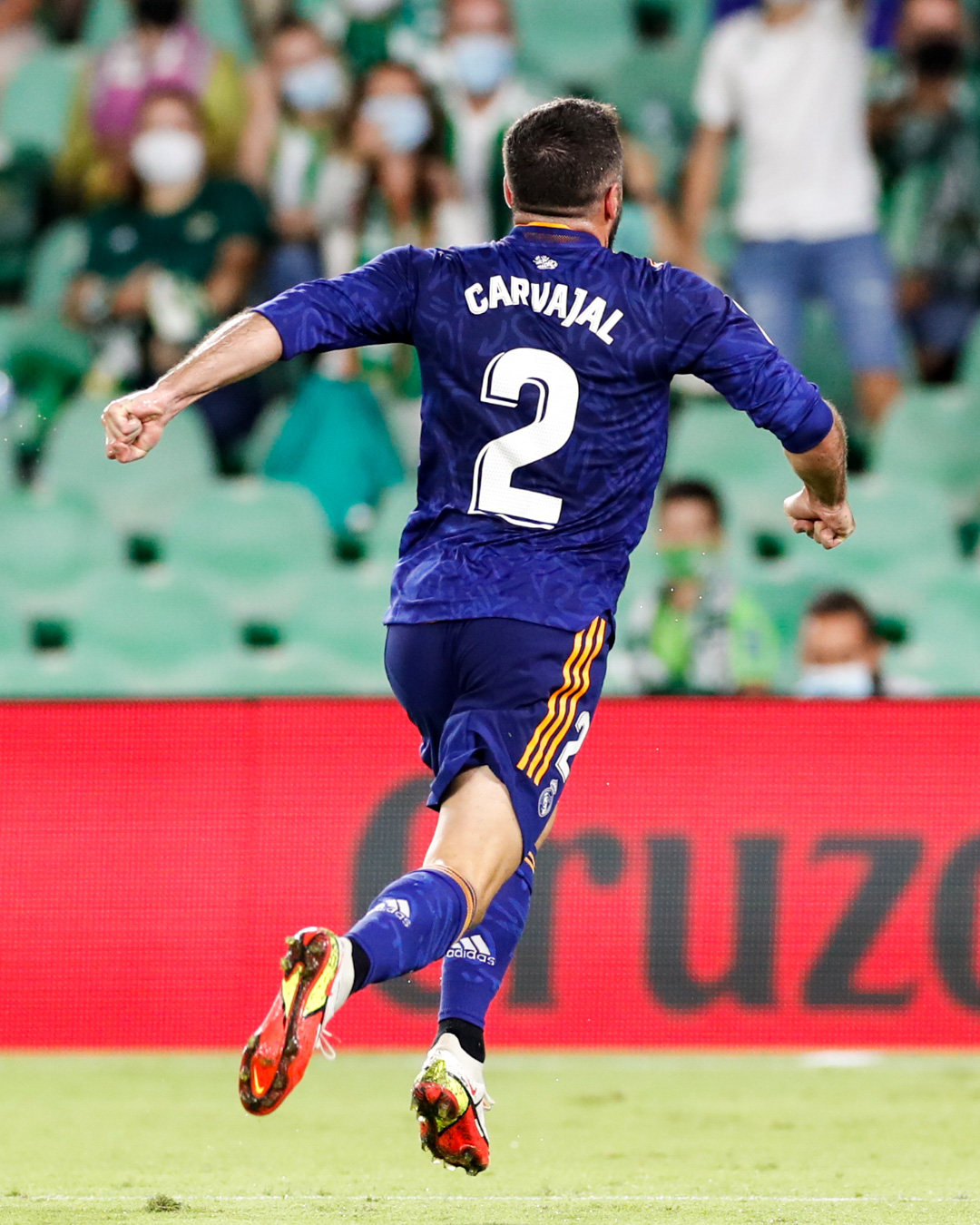 Yesterday I was able to watch the match between Real Madrid and Real Betis and I was very happy about it because last week I couldn't watch any football matches so I really wanted to watch at least 1 this week.

The football matches so far have been all from national league competitions, the international tournament, the Champions League, hasn't yet started. In the Spanish league, the favorites to win this season are the 2 teams from Madrid, Real Madrid, and Atletico Madrid, which by the way was the champion last season. I believe Barcelona could also be considered a candidate but the impact of losing Messi without signing a major star will probably affect them in the short term. That is why I believe the 2 teams from Madrid have more chances of winning the league, especially Real Madrid if they end up signing Mbappe.

It didn't take much time for Real Madrid to have a disappointing result this season. In last week's match, they tied against Levante, which is a minor rival, and that was certainly a match they should have won. If it wasn't for Vinicius' spectacular performance they would have lost that match.

This week's match was with a better rival, Real Betis, and I was expecting a better performance from the team and a well-needed victory. I was happy to see Vinicius in the lineup because he certainly deserved that after scoring 3 goals in the first 2 matches coming from the bench. I also liked seeing Miguel Gutierrez as a left-back because he is a young promising player and needs to gain experience on the pitch.

I wasn't happy seeing Isco in the lineup though. This is a midfielder who had some great seasons in the past, but in the past 3 years or so his performance has decreased tremendously and there doesn't seem to be a solution for this. Every time I see Isco playing I know Real Madrid will have a lot of trouble in the match because he is not only very slow while running, he also slows down the counter-attacks, and he does a terrible job helping in the defense. I don't think he is a good player for today's fast-paced football.

Right at the beginning of the match Real Madrid almost scored a goal but Benzema's shot went out by mere centimeters. This goal attempt happened thanks to Vinicius who made an amazing play on the left side of the pitch. Vinicius and Benzema have been the 2 best Real Madrid players in these first 3 matches, with the added merit for Vinicius because he started on the bench on 2 of those matches.

After the first few minutes where Real Madrid was a bit better mainly thanks to the danger caused by Vinicius, Real Betis began to take control of the ball and slowly became the dominant team. During the first half, they were the best team in my opinion, they have more goal attempts and they also had more passes and more ball possession.

Real Betis problem was that even though they were playing a bit better, they were incapable of properly finishing their attacking plays. Each of their shots was easily stopped by Courtois and the mos dangerous one was a free-kick by Canales around the 27-minute mark.

Something important that allowed Betis to take control of the match in the first half was that after Vinicius proved how dangerous he could be in the first few minutes, he eventually started to be covered by 2 Betis' players and this resulted in Vinicius having much more difficulties in creating good attacking plays.

Gareth Bale was playing on the other side of the pitch but he wasn't very active in this match. He did some crosses but nothing more. I was honestly expecting much more from Bale but it is not a surprise to see him causing little to no danger despite being an attacking player.

The presence of Isco was also detrimental in my opinion to Madrid's aspirations. As I mentioned before, this player can hardly be considered an elite player anymore, and it is not good for the team to put him on the pitch, especially in the lineup. Slow, weak, and incapable of producing danger with his passes or shots, and also incapable of helping his team while defending. Today's football is with very fast moves and requires physically strong players and sadly for Isco, he cannot be considered a competitive player with today's standards. The only reason he was playing was that both Modric and Kroos were unable to participate in this match.

Real Madrid will need to sign a couple of competent midfielders in the next year or 2 because Modric is getting very old, and Isco will obviously leave the team when his contract finishes. I am sure that when Real Madrid decides to hire new midfielders, they will be physically strong players capable of providing good performance in fast-paced plays. Slow players like Isco aren't very valuable nowadays, this might change in the future but right now that's how things are.

During the majority of the first half, Betis was better and I even started to think that they deserved to win the match. Luckily for Real Madrid, the first half ended with a tie with no goals and this will allow both teams to revisit their strategies and try something different in the second half.

Vinicius had 2 players preventing him from successfully creating attacking plays, and Benzema and Bale were a bit uninspired, especially Bale. Another problem Real Madrid is suffering is the low performance of the players occupying the right-back position. They almost lost the last match thanks to mistakes by Lucas Vasquez, and Carvajal has been injured for a few months so it is normal for him to have a low performance. The right side of Madrid's defense is the weak one thanks to this situation.

I was very disappointed with how Real Madrid played in the first half. I believe the team should be able to play much better even if both Kroos and Modric aren't on the pitch. This is something that Ancelotti will have to work on and this cannot be solved by the potential signing of Mbappe.

During the second half, Real Madrid started to create attacking plays by crossing the ball into Betis' area and hoping for a header goal. There were a couple of good chances with headers from Benzema and one of those even ended up being a goal but he was in an offside position so the goal wasn't valid.

This match looked like it could very well end up as a tie just like the previous one but luckily for Real Madrid, in one of the many attacking plays they had in the second half, Benzema ends up crossing the ball into the area once again, and this time, Carvajal appears and scores with a cool volley goal around the 61-minute mark. This goal certainly improved his low performance from the first half, and in the end, allowed his team to win this match.

Real Madrid improved a lot during the second half, and the goal certainly gave them a lot of confidence. The entire match was very even, but I believe that in end, Real Madrid's victory was fair. Their improvement in the second half was noticeable and it justified the final 1 goal advantage.

It was good for Real Madrid to finish this match without receiving any goal, after receiving 4 goals in the first 2 matches I am sure most people were getting worried about their defensive performance but I think they still need to continue improving because Betis could have very well scored in the first half.

In the next 2 weeks there are going to be national teams matches and I am not sure I will be watching those. The most important event that might happen in the next few days is the rumored signing of Mbappe for Real Madrid. It is clear Real Madrid needs a new world-class striker and Mbappe is the obvious choice. Not only that, LaLiga also needs new important players after losing Messi and Sergio Ramos this year, and having lost CR7 back in 2018. If Mbappe signs for Real Madrid, he will be the main player of not only that club, but also of the Spanish league. I hope this signing ends up happening and the transfer window is about to close so this should be confirmed any day now.

It was an interesting game and very competitive match.

Thanks mate I agree, I would have preferred more goals though.

Quite a cagey affair this one, a good game, albeit with fewer goals than expected