Up around five again, so that’s been fairly consistent, but another hour short, which also seems to be fairly consistent. 😢 I didn’t drag too hard today, but I wasn’t particularly motivated either. Even so, I did get a bit done that needed doing.

The morning routine was pretty routine. Cryptos did take a slam and BTC retraced well below sixty thousand…looking like sixty may become resistance, but we will have to see. I’m still keeping a close eye on my shittoken investment on Polygon, but there wasn’t any good news over there today either. My risk profile has gotten a little less green, but still green, so I’ve left it alone for now. HIVE got slammed as well, but to my utter amazement it’s still holding above a dollar!

We usually go out for our walk with the doggies on Sunday, and we did sort of plan on it, but it was seriously cold and raining/snowing so figured the dogs would enjoy it about as much as us (that’s my juicy rationalization anyway), and Dude needed another flea bath anyway…regardless, we went into town and did the grocery shopping early instead of going out. We picked up a few extra weird things like grease and toothpaste and a couple other things, so we were darn close to two hundred again this week! 😱

After we got back and put everything away and I snagged some lunch, the weather hadn’t really improved much, so I gave the Dudester another flea bath. Not sure what the first owners did to him, but he really doesn’t like water…have a feeling he got a bath round about the time they mutilated his tail. 😢 I used the new shower extension we got this time rather than a bucket and it was a lot quicker and easier.
I feel really bad about it…we were a month short this time on his medicine. He hasn’t had any fleas for a few years, it’s our fault that he’s suffered with itching. 😭

Having done the shopping and bathed the dog, I was starting to putter out…wanted to accomplish more but couldn’t quite pin anything down. Resisted the temptation to play Oculus yesterday, but gave in today. Didn’t play long, just through one level of Lucky’s Tale. Some of the platform ing is a bit frustrating in terms of angles, but it hasn’t been bad and despite somewhat limited variety of gameplay/enemies it has been fun. There was an underground level (like I said before, it really is Mario in 3D, like with pipe zones and everything) and I do have to admit that being in a dark cave and having the headset (where you look) as the flashlight was a super cool design!

Just played through the one level, though. Couldn’t justify spending much more time at that and decided to get out in the garage. Pretty cold out there and not really any good progress towards doing anything with the brakes, but when I went to try and see if I can get at the master cylinder from the top and lifted up the seat I found a lovely surprise mouse nest. 🤬 I’d already gone through the extra job of bringing up and emptying out the vacuum, so I worked on cleaning that mess up: It’s certainly a lot better, but to be honest, I still wouldn’t really be happy touching around in there with my bare hands…would use some bleach or something but the bottom is fiberglass and so I’m not sure if that would be good or not. 🤔

Spent a ton more time researching and trying to figure out the GD brakes…still not been able to pin down a plan of action that I’m happy with…several routes I could go, but none of them really solve all the issues. In the meantime I got some bearing grease to repack the wheel bearings and a stiff brush to clean out the old grease…only thing is, no point in regreasing the bearing and putting the wheels back on until the brakes are fixed. 😡

That was about it for the day. Wenche made us some pancakes for dinner and we watched some more Deadbeat. I played my Splinterlands quest and then got ready for bed. It’s become a new habit lately to be getting ready for bed with two or three thousand steps left to go 🤬 but I got them done marching in place in front of the TV again and then it wasn’t long before I fell asleep. I’m definitely running out of steam when it comes to caring much any more about CryptoSuckmaster…manifestly, I still care enough to bother with this section of my post, though.

Did a couple more missions in the second area on Rising Star today and that was about it. Keeping at it despite not really having any solid reason why. Played my Splinterlands quest in the evening and at least recovered some of the progress I’d lost over the last couple days. I am a bit concerned that I’m behind pace to get to Diamond, but all it really takes is a couple good win streaks. Got my quest done, which was Water splinter again, back up into Gold II. Nothing major in the way of rewards today, though, a trickle of DEC and a few commons; better than potions regardless (got more than four hundred of each just sitting and collecting dust - I suppose opening Chaos packs I’ll actually use some of them: It’s a little bit boring/frustrating now that the voucher drop has stopped…I liked having that extra decision to make whether to sell, spend, or wait on them. I think it will start again with the next round of pack sales, though.

Ah nice. Getting outside and being at least a little productive even when it is cold. You inspired me to just that yesterday and it led to a dog bath as well. 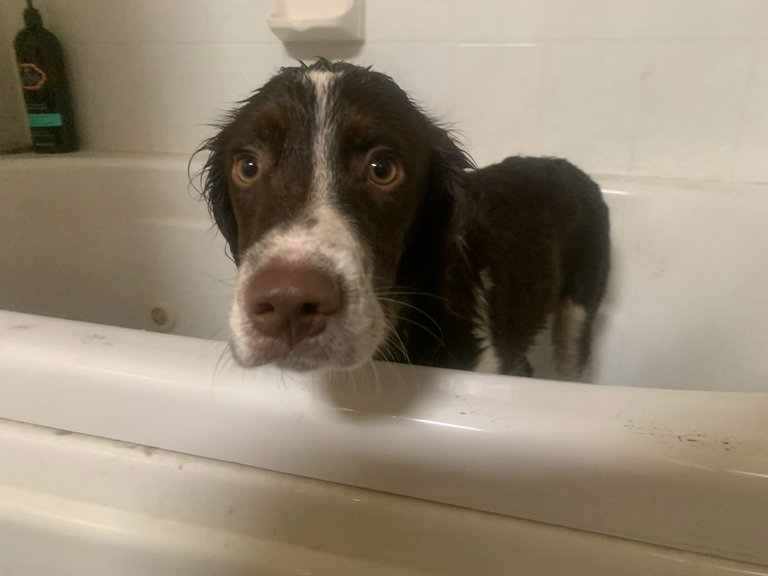 Thanks so much for stopping by! You made my day knowing that I inspired you to go out. 😁 From the look on doggo's face there, not sure if (s)he'd be happy with me or not. 🤣

Totally happy with the cross country adventure. Not sure about the bath afterward though...