It was a hard fought battle as Italian giant Napoli lost to Russian side Spartak Moscow in a five goals triller, losing the game by 3-2 at home. 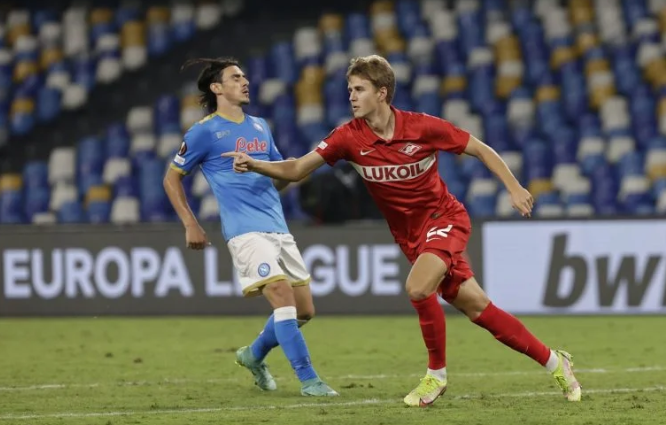 The game which saw Napoli losing for the first time in all competitions after they were been stunned by the Russian side.

The game which saw both teams having a player been sent off in a bad and hot tempered game. 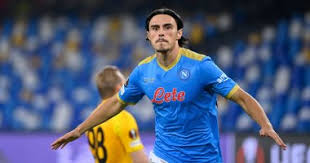 Napoli scored first in the very early seconds of the game when a Lorenzo Insigne cross came into the box and was spilled totally by Spartak Moscow goalkeeper Aleksandr Maksimenko with the ball getting to Elmas who did no mistake by converting the ball into the net to put the home team in front.

Napoli however were the better side as they keep on putting the pressure on their opponent for more goals but saw that changed when Mario Rui was shown a red card for a rough tackle against spartak Moscow's Victor Moses after VAR review. 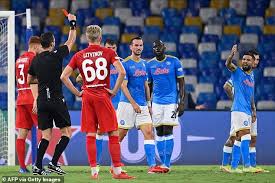 However, with the red card the statistics of the game changed and was now moved to the favour of their opponent and they began to create chances to score and also put pressure on the home team.

The deadlock was finally broken when a Victor Moses cross was sent through the Napoli stubborn defence in the 55 minutes of the game when the ball eventually got to Promes who equalized with a deflected shot to make it 1-1.

The visitors moral to score more goals even grew higher when they had the momentum and almost grabbed another when Alexander Sobolev header was far wide from another Victor Moses cross but was missed.

The host being a man down still show more effort and commitment in the game as Napoli were most dangerous from set pieces, with Kostas Manolas having a fine strike ruled out for offside and another close-range effort which went over the bar. 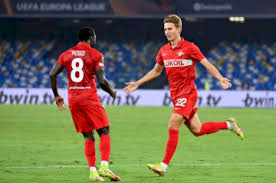 The game which saw 10minute remaining left, saw the away side coming back from a goal down to make it 1-2, when Ignatov comprehensively found the bottom corner from the right edge of the box to complete the come back for the visitors.

Spartak Moscow Maximiliano Caufriez was sent off moments later for his second yellow card of the game, but still the away side still pushed forward for another goal and eventually added a third when Promes scored his second goal of the game. 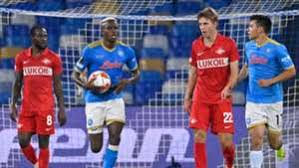 Nigeria's Victor Osimhen pulled one back for Napoli in injury time to make it 2-3 but the goal was not enough to secure point for the home side as they fall to their first defeat since Spalletti took charge of the club in May.

Napoli will have to get things back when they face Fiorentina in the league away from home as they still hold the perfect start with six wins in a row.

Congratulations @emeka4! You have completed the following achievement on the Hive blockchain and have been rewarded with new badge(s) :