100 Million Down The Drain. 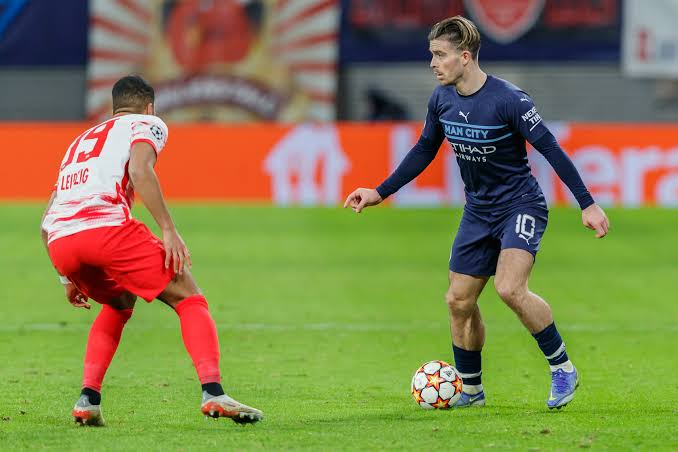 I know we have been used to how inflated the market is right now, so it's hard to truly judge a player by the value of the inflated market. We have seen how people called the money paid for Harry Maguire a waste due to how terrible his performances were this season for Manchester United but maybe it's the British press, they have a way of hyping average players to stock up their market.

I admired Jack Grealish when he was at Aston Villa and knowing he was a supporter of Manchester United through and through made me wish for him to come to us but after he signed up for Manchester City, in all honesty, I was worried and scared because I felt he would rip every team apart with the help and support he would get from his teammates but he has been playing second fiddle since he joined.

It's easier to say that he is adapting to the new team but it's the same Premier League and knowing the price tag that came with him, I expected him to hit the ground running but he hasn't and that's another flop of the season with that kind of amount, apart from Lukaku for Chelsea.

In the big games and big moments, you want your marquee signing to be the one to bail you out but in the case of Jack Grealish, after coming on for Manchester City against Madrid, he had the opportunity twice to extend the lead since they are already 1-0 up but he couldn't make it count. You want him in moments like that to have that chance but he just didn't live up to his price tag and his team suffered for it.

I know it's a collective effort and Guardiola is to be blamed just as everyone else too but when you have such a price tag hanging over your head, you are expected to pull magic out of your boots and I would say it's the same problem Paul Pogba had with Manchester United and maybe I would say it's the same that Gareth Bale had with Real Madrid even though he has more than paid his dues for Real Madrid.

Imagine the moments Gareth Bale came through for Real Madrid and still, the fans wanted more from him due to his price tag. It's only logical for Paul Pogba and Jack Grealish to be dragged to filth since they haven't even repaid anything and justified their huge price tag. I would say it's another wasted 100 Million for Manchester City since their marquee signing can't even stop them from getting eliminated at the hands of Real Madrid when he had the chances to put the game to bed.

Maybe he would come good for Manchester City next season, we don't know. Maybe he has already lost faith in him, we can never tell because Guardiola only knows what Guardiola knows. With the uncertainty around Sterling, maybe he would keep Jack Grealish for another season and give him the chance to redeem himself or not, we don't know but one thing I know is that Jack Grealish has not justified that huge amount Manchester City coughed out to sign him. If you can't make the fans happy at the time their hopes cling to you, then of what use are you?

100 Million Pounds already looking like a terrible investment and we have to wait and hope that he would justify that by next season or going forward. Another year of dashed hope for Manchester City in the UCL and 100 Million Pounds couldn't save them.

Hi @gingerup,
Thank you for participating in the #teamuk curated tag. We have upvoted your quality content.
For more information visit our discord https://discord.gg/8CVx2Am

I'm grateful for this.

I feel bad for Jack. He is struggling to adapt. I hope he can get better by next season but that price tag is too heavy for him to bear. It's a crazy market after all.

It's too heavy on him and I doubt he can live up to it except he scores 40 goals a season which we know won't happen.

Hahaha he can NEVER do it

No player is worth that type of money and until clubs change what they do this will be very common. He still adds to the team but not 100 million worth.

@gingerup 64
about 2 months ago (Edited)

The market is crazy and I would say no player is worth that. They just keep throwing money around.

The TeamUK tag is for people based in UK or UK nationals living overseas. If it doesn't apply to you please do not use it

@manuellambert 46
about 2 months ago (Edited)

I said it from the beginning, this guy is not worth the amount of money man city paid for him,he had no Champions league experience before coming to the club,I still can't understand why Manchester city paid so much for such a mid player🤦🏾‍♂️.

🤣I can never understand it too. A waste of money. He's not a guaranteed starter too.

He still won't score 20 goals a season which you would expect from 100 million investment.

Looking again, I feel what City wanted when they bought him was a squad player who may come in to unsettle one of the starters. IMO, every player starting ahead of him in that team is a real talent. No doubt Jack is really good, but some players who are really good can only shine that star in "not so big teams". What City wanted him for is similar to what Klopp has with Jota and Luiz Diaz.

Again, because Pep loves to experiment with his teams, you're almost never guaranteed a starting spot as the style he may want to play may not fit your own game.

Players need to look beyond the money and club name when making transfers. They should look at how it'd affect their own styles and careers.

I agree with you and for a squad player, 100 million is a waste of investment if he won't even guarantee 20 goals a season.

That's the English press for you, always hyping their average players to pump up their value. And that is the same thing they're trying to do with Declan Rice, and I dare say any team that ends up overpaying for that dude will regret it later

They are quoting 200+ for Declan Rice. Ridiculous. He can't even guarantee titles.

He can't even guarantee one single match talk more of titles

There's no way Jack can justify that price tag or have special effect on that well packed team.

But he could get himself into city Record book just like Kai Havertz did last season with Chelsea by scoring a very important goal that makes Man city win UCL.

Kai Havertz didn't even score a goal in last season UCL until that Final against Man City.

Exactly. Havertz produced at key moments but Jack hasn't done it and he might not for a long time to come.

It's greatly disappointing to see Jack underperforming but these things happen. He shouldn't be crucified just yet. I believe he has the quality inside of him and with time, he'll showcase it. Maybe, just maybe, the environment isn't favourable.

Of course, that environment can't make him thrive and he is not the kind of player that would give you 20 goals a season too, so he won't always justify that heavy price tag.