Hello and welcome to all the readers.

The tournament is started well. This post contains matches played on day 2, 3 & 4 in UAE

RCB won the toss and elected to bat first

RCB managed only 92/10 in 19 overs. A very poor batting performance

KKR won the match by 9 wickets

A poor batting performance by RCB. The bowlers did not have enough runs to defend.
On other hand, KKR fielded and bowled well
This is the first match for both the teams, so lets hope they figure out the shortcomings.

PBKS won the toss and elected to field

RR scored 185/10 in 20 overs. They lost the momentum in the last overs and lost wickets regularly.

In reply, PBKS had a 100 run first wicket partnership. RR fielding was very poor and they dropped 3 catches in that partnership.
PBKS had few more partnerships but they messed it up. PBKS needed 4 runs in the last over, but managed only 2 runs and lost 2 wickets, managing 183/4 in 20 overs
RR snatched a victory from PBKS

RR won the match by 2 runs

PBKS should have won this match easily. But they made a mess of it. This is not the first time they have lost a winning game.

RR have to work on their fielding and holding on the catches.
They won this match, they were lucky. Others teams may not be that generous.

This is the first match for both the teams, so lets hope they figure out the shortcomings.

SRH won the toss and elected to bat first.

DC won the match by 8 wickets
With this win, DC go to the top of the table.

This is the first match for SRH, so lets hope they figure out the shortcomings. Also DC keeps the tempo up and keep on winning. 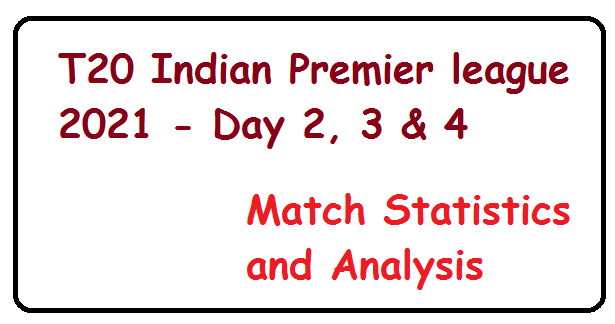