A big day tomorrow for the daughter of a very nice bloke I know as she has her first MMA bout on home soil here in Thailand, so allow me to introduce... 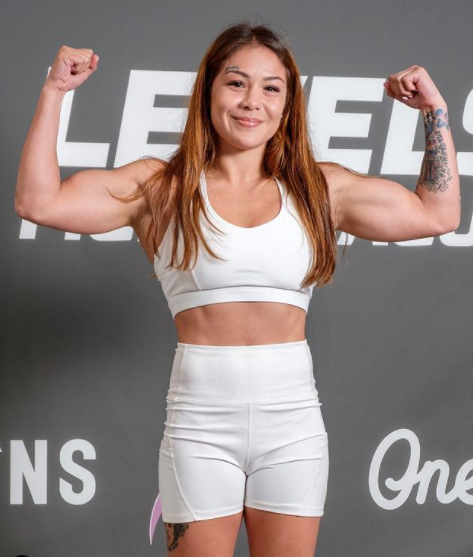 Noëlle has a foundation firmly in Judo and has been competing since she was 6 years old. She was Dutch national champion in 2018 and has also competed internationally for Thailand, due to her dual French-Thai nationality.

She is also an expert in Jui-Jitsu in which she has also competed at international level.

Noëlle has also successfully competed in Muay-Thai but has struggled for worthy opponents, as so many fighters have steered clear of her. She has long been desperate to break into MMA and after a couple of warm-up bouts, took the GAMMA Asian title and Gold Medal for her weight at the Asian Championships in Khazakstan last October after overpowering Indian, Samata Sonavane, forcing her to tap out, just over a minute into their bout.

You see how skilled and lightening fast she was in the takedown? No doubt her background in Judo coming into play and once her opponent was in a hold, there was no way back. Top performance.

With both her Dad and brother also being fighters, she has the pedigree and experience to go a long way in MMA taking things one step at a time. Hopefully we'll be seeing her at UFC soon!

Saturday will see her fighting on the Fairtex promotion's, 'Descendents of the Empire II' card at the historic Lumpini stadium in Bangkok against Pakistani, Anita Karim at Atom weight which is for fighters under 52.2kg 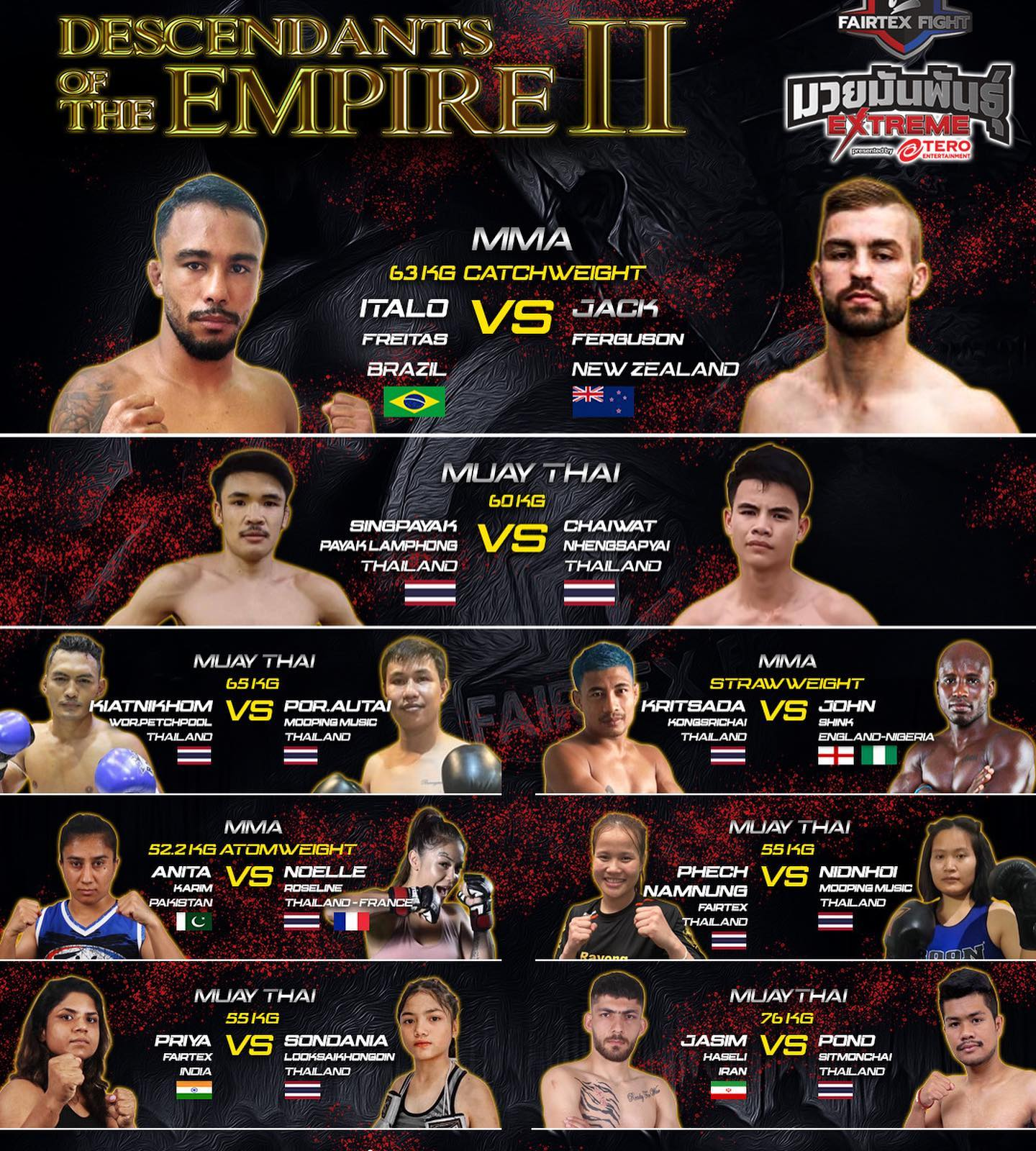 Lumpinee boxing stadium (สนามเวทีมวยลุมพินี) in Bangkok is the home of modern Muay Thai and originally opened back in 1956. It was moved and rebuilt in 2014 to a location on Ram Inthra Road (near where I live) and has a capacity of 5000 spectators. 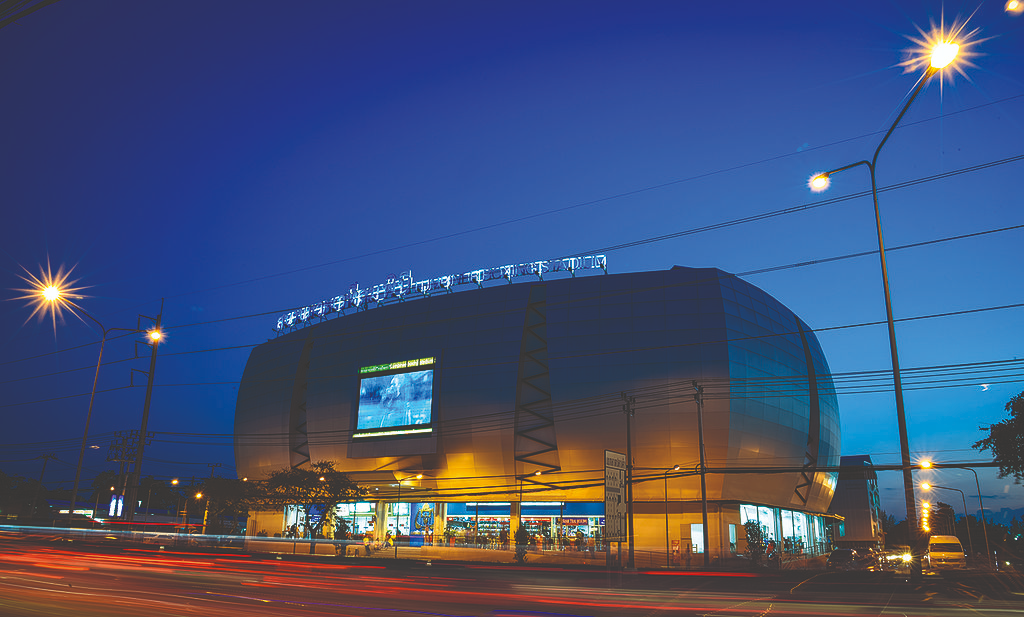 By Mr.Sayompoo Setabhrahmana - Work created under contract with the Department of Tourism, Ministry of Tourism and Sports. Published with author's permission, CC BY-SA 4.0,

Obviously there hasn't been much action throught the whole pandemic but crowds will be allowed in on Saturday with everyone having to take an ATK test before being admitted.

There is also history being made...
This is Thailand, and it is in many ways, still a very traditional place and as such, Lumpinee never allowed female fighters to fight, there was also no other combat sports allowed there so tomorrow, thanks to a relaxation in rules by the Thai Army who control the stadium, history will be made obviously, as both females will be allowed to fight and it's a mixed card with both Muay Thai and MMA taking place!

The other good new is, its been streamed live!

And for the French speakers amongst us, you can find a great interview with her here

That's it! It all starts at 10.00am Thai time which is 3.00am GMT and 4.00 UTC so tune in and watch the champion in action. Sadly I'm working tomorrow morning so can't get down to the stadium but I'll be sneakily watching on my phone ;-)

Have a great weekend ladies and gents!

Marching On Together with

PS If @constanza can come up with one of the crypto betting sites that might have odds available, I'd love to hear from you mate. Thanks :-)

All photos and videos used are from publically available sources, www.gamma-sport.org, www.fairtexfightpromotions.com and www.instagram.com/noelle_mma/ and as such should be fine to reproduce. If however, you see me on Monday limping and sporting a black-eye, they were not OK to use lol

The people doing V2K with remote neural monitoring want me to believe this lady @battleaxe is an operator. She is involved deeply with her group and @fyrstikken . Her discord is Battleaxe#1003. I cant prove she is the one directly doing the V2K and RNM. Doing it requires more than one person at the least. It cant be done alone. She cant prove she is not one of the ones doing it. I was drugged in my home covertly, it ended badly. They have tried to kill me and are still trying to kill me. I bet nobody does anything at all. Ask @battleaxe to prove it. I bet she wont. They want me to believe the V2K and RNM in me is being broadcast from her location. And what the fuck is "HOMELAND SECURITY" doing about this shit? I think stumbling over their own dicks maybe? Just like they did and are doing with the Havana Syndrome https://ecency.com/fyrstikken/@fairandbalanced/i-am-the-only-motherfucker-on-the-internet-pointing-to-a-direct-source-for-voice-to-skull-electronic-terrorism

Yay! 🤗
Your content has been boosted with Ecency Points, by @leedsunited.
Use Ecency daily to boost your growth on platform!

Welcome back as you disappeared.

All is not well in the football world lol

She has so really good faints, and the leg kick was lethal. It's rare to have a good grappler that can mix it up like that, and set up the take down with a good faint.

Hey mate, I forgot you were into MMA! Thanks for the lovely comments, I will pass them on :-)

She's been asked to represent Thailand at the Asian Kurash Championships in Tajikistan which starts later this week so no breaks!

If you didn't need to Google what Kurash is, you're a better man than me!

Best wishes to you and family mate :-)