Pedro Rodriguez, or simply known as Pedro. Is a player of Spanish origin and sheer intent. A humble servant of the game. One of the few players who haven't been in the limelight much but has been influential. His achievements are big. Not by the numbers but by the types. And that matters. Wherever he has been, he has won. It all started on the 12th of January, 2008. Where he made his debut for Barcelona. That young lad would go on and win it all. 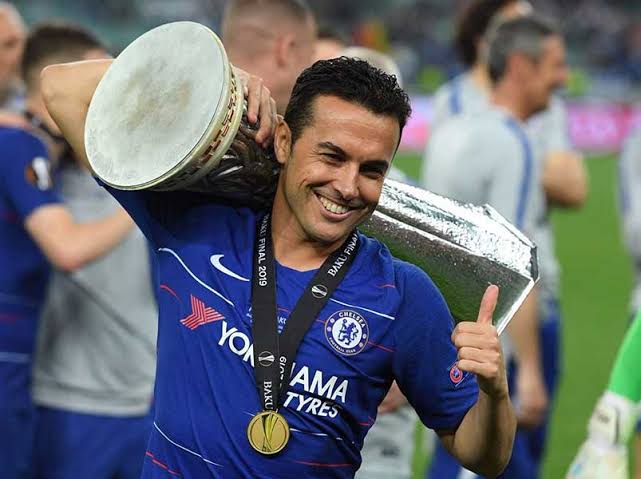 Pedro was a part of many highly successful teams. He was part of the Pep Guardiola led Barcelona which won the famous sextuple. He was part of the all conquering Spanish national team which won the Euros, Confederations cup and most importantly the world cup. He has also been part of the famous Antonio Conte led Chelsea which introduced the back 3 in the premier league and showed the country how much wonders it can do. A great example was in his time during Barcelona. The champions league final. The clock just passed the 26th minute at wembley, Xavi had the ball just outside the box. He then gives a diagonal pass to Pedro. Who then shoots the ball into the back of the net and makes a run for the crowd. the crowd celebrates. He then slows down, holds the Barcelona badge and his teammates comes and hug him. As if this scene had all the things to show what he does for the team. A player who’s committed to his team, runs when he's needed, slows down when when he's called upon, moreover, he will do anything for the team when it is needed. But that's not the only highlight of such an illustrious career.

Fast forward a few years, we're on the blue half of Merseyside, at the Goodison. A stiff Evertonian defense gave the Chelsea Frontline a very hard time. Suddenly near the half time whistle, Pedro drifts towards the middle, he's right in front of the box and received a pass from Hazard. A little shimmy of the body and he curls it home. The awaited breakthrough came. Mane other deadlocks were broken by Pedro.

In a stellar career Pedro has played a total of 577 games scoring a staggering 157 goals along with 95 assists. Also, stats can be deceiving. Pedro is a versatile player who can play on the both wings. He is fast and good on the ball.He even played in a more central role for sometime. He is known for his pace, balance, defensive work rate and his finishing ability. He holds the record for highest conversion rate for a player in a single season in the La Liga. This explains a lot about him. In the 2009/10 season he converted 31.58% of all the shots he took on goal. His role in the team was to stay out wide and create space for the midfield and messi to operate, as well as keeping the full backs occupied to him and creating an overload in the wings. In a match against Tenerife, he stopped counter attack at the edge of Barca’s box and then ran across the length pitch to score a goal. Moments like this explain his work rate. He also started in a world cup final and played his role perfectly. There were times in his career where people could doubt in his abilities, but never his dedication. He's that team player who is instrumental. His team achievements are simply staggering. He is the only player in history to win UEFA champions league, UEFA europa league, the FIFA World cup and the Euro.

After winning the Europa League with Chelsea, his teammates said that he had completed football. This might well sound like an overstatement. But actually it isn't. Many people mix completing football with conquering football. Both are different things. He’s not the biggest star in the team, nor the guy on who the tactics are based on But he's the kind of player that makes the team tick. A very proactive member. Now he's in Roma under Jose Mourinho, the person who brought him to Chelsea in the first place. Roma are bossing Italy. And this man is on his way to conquer the country of Napoleon.