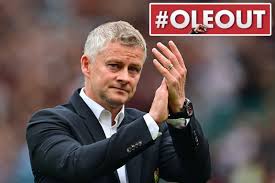 This past week we all as Manchester United fans have seen how badly the team has performed, from the look of things it doesn’t seem to be the players faults as we have a lot of squad depth, with the recent signing of jadon Sancho, Raphael Varane and Cristiano Ronaldo it’s quite expected that the team should be pushing for the title in all competitions at all stages , with the recent loses at young boys fc in the champions league group stage match , west ham in the Fa cup and the most recent defeat at home to Aston villa ,it is quite obvious that ole gunner solkjear isn’t the right man for the job, he lacks the agility and authority to coach a big club like Manchester United, his lack of experience and nonchalant attitude during matches shows how unserious and uninterested he is in his job.

Till now Manchester United cannot boost of a stagnant first 11 even with the world class players present in the team , he lacks the intelligence to pick the appropriate team for matches and make the right substitutions at the right time. He just sits on his throne like a king watching his little tv, with his assistants hovering around him whispering stupid ideas into his head, he doesn’t even deem it fit to stand up and give orders and instructions to his players even while losing a match, he coaches the team like someone that doesn’t get paid for his job.

Presently Manchester United needs a manager like Antonio conte , someone who can take charge of his squad, give correct and decisive instructions and make appropriate substitutions during matches, this is very important and must me done as soon as possible if we are to chase any title this season.

Congratulations @miles101! You have completed the following achievement on the Hive blockchain and have been rewarded with new badge(s) :