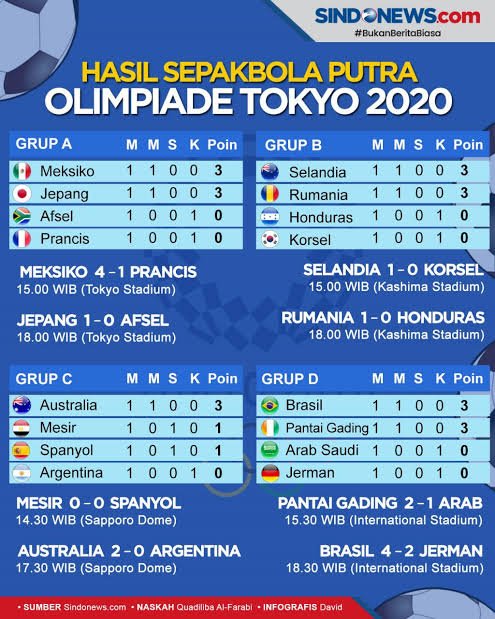 The inaugural Group A soccer match of the Tokyo 2020 Olympics, Mexico won by defeating France. In a match that took place at Tokyo Stadium, Japan, Thursday (22/7/2021), Mexico overthrew France with a landslide score of 4-1. Mexico's winning goal against the French Roosters was scored by Alexis Vega in the 47th minute, then Sebastian Cordova's goal in the 55th minute, then Uriel Antuna's goal in the 80th minute, and Eduardo Aguirre's goal in injury time. While France was only able to reply with one goal through the penalty spot by Andre-Pierre Gignac in the 69th minute.

In another match in Group A, host Japan won full points after winning over South Africa with a narrow score of 1-0. The Blue Samurai team won through Takefusa Kubo's goal in the 70th minute. From the Group D match, Brazil managed to beat Germany with a score of 3-0 in a match that took place at the Yokohama International Stadium, Japan, Thursday (22/7/2021) night WIB. Richarlison scored the three winning goals for the Brazilian Samba Team in the 7th minute. Richarlison managed to increase Brazil's advantage to 2-0 in the 22nd minute. The Everton striker scored a hat-trick in the 30th minute through a measured shot just outside the penalty box and closed the victory with the score 3-0.

Another match in Group D, Ivory Coast beat Saudi Arabia with a score of 2-1. In Group B, New Zealand narrowly won over South Korea with a score of 1-0. While Romania also won with the same score over Honduras. From the Group C match, the surprise occurred when Australia won over Argentina with a score of 2-0. Meanwhile, Egypt managed to hold Spain to a goalless draw.