CAN WE ALL GET ALONG ? 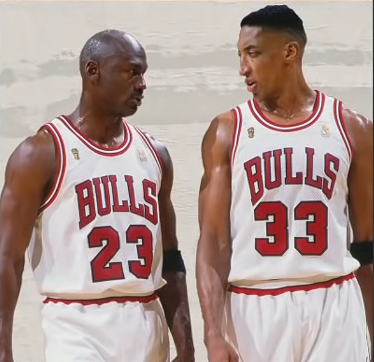 Every time I am hearing comment about Scottie and MJ, it is going round and round. MJ lately does not have to do much to be on the news. He is a team owner, a billionaire with Nike shoes. I have a feeling Scottie needs Jordan more than the other way.
Beef between these guys is out of this world.

I recalled when Jordan lost his dad and left the NBA for almost two seasons, Scottie was the man in Chicago but cannot win without Jordan. Have you watch the last dance yet? It is hard to see how things are unfolding between both guys. When you are that competitive, you will make enemies along the way. This is how the game of basketball is.

Last year Bucks win cause they were so competitive. This is the same for Chicago Bulls in their era.
Jordan does not play for second. He is the number guy and nobody cannot take it away from him.
Scottie will always be the Robin that Michael's batman. There is no turn around or else to this fact.
Scottie made bad deal along the way that leave a sour taste in his mouth while MJ racked millions.

Winning feels good but when you are not getting pay properly, things change.
Scottie will always need MJ to be heard in the basketball scene.
Scottie made a bad deal by signing $18 million contract for 5 years.
The reason is clear. His dad was in a wheel chair. His brother was sick.
Scottie wants guarantee for five years to play not thinking he could get more if he waited couple years.
In early 90s this amount meant something but as the time goes by and other guys get better contract
Scottie infuriated by this contract, the Bulls told him not to sign, wait couple years.

Actually for the record Scottie made more money playing basketball than MJ.
MJ made his money through his likeness, Nike and commercials. He surpassed Scottie
by a long shot. I think Scottie is just doing his best so we can read his book.
Just like the last dance was all about MJ, Scottie wants recognition.
Without pulling any dirt, Scottie is a great player. He is one of the reason the Bulls can win
6 championships with Phil.
With all of these, MJ does not bulge. He is still the greatest who ever play the game.
What do you think?