Bitcoin City Will Be Built Soon, In Which Country Is It Located ..? 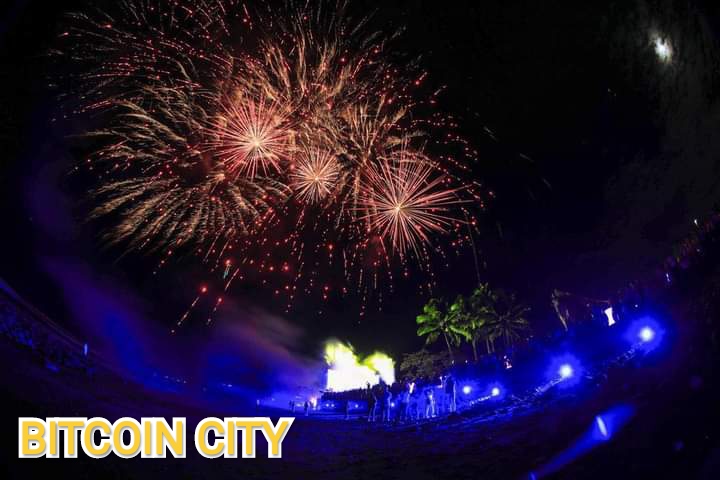 Bitcoin City Will Be Built Soon, In Which Country Is It Located ..?

Making Bitcoin a legal tender is a reasonable decision and it is possible that many other countries will follow suit. But to build a city that is fully funded by Bitcoin, I think this is an extraordinary madness.

Bitcoin City, a city that is backed up and fully funded by Bitcoin, will soon be built in El Salvador. This announcement was made by the President of El Salvador, Nayib Bukele, who was announced on Saturday 20/11/2021.

This is not a fantasy or a mere issue, do you think it's visible for the project to run? Let's analyze.

What is Bitcoin city?
The city of Bitcoin is the ambition of the President of El Salvador, Nayib Bukele, no kidding, El Salvador issues debt securities that are tokenized via the Liquidity side chain blockstream of 1 billion US dollars. 500 million US dollars was used for city development, the remaining 500 million was used to buy Bitcoin.

But arguably not much for the development of a city, said president Nayib Bukele, this is a tax free city. Utopia for bitcoiners he said and financed by debt securities in the form of Bitcoin.

Also powered by geothermal for mining activities, El Salvador itself has established Bitcoin as one of the legal tenders in its country and has succeeded in building a hospital funded by Bitcoin.

Then where is the city of Bitcoin?
The location itself is in the Fonseca Bay area, near the volcano.
What are Bitcoin city facilities?
What is certain is that this is a city without taxes other than half of the income will be used to pay off the debts of the Bitcoin debt securities that have been issued for development.

The city is also powered by the geothermal energy of a nearby volcano. This city is equipped with a Plaza, airport, and various other supporting facilities that will be designed to resemble the Bitcoin logo when viewed from above. Cool too.

How is this Bitcoin city financed?
This utopia will be built entirely using debt securities backed up by Bitcoin, Crypto Exchange BITFINEX will be one of those appointed to be the book runner or coordinator for issuing these notes.

The debt securities will be issued in 2022 and the project will start 60 days later, approximately how much does it cost to build a city?

Let's compare it with other new City projects. So how does the cost of building a new city compare? For example, the city of KangBaShi in China was built at a cost of 2.6 billion dollars in 2003. Naypyidaw, the new capital of Myanmar which was built in 2002 cost 4-5 billion dollars. The candidate for the new Indonesian capital is estimated to cost 32.5 billion dollars or about 550 thousand Bitcoins.

Next is Forest City, a city that stands on artificial land in Johor, which was built at an estimated cost of 100 billion dollars or 1.7 million bitcoins. This far exceeds Satoshi Nakamoto's Bitcoin, you know. While the largest Bitcoin holder in the world is only 288 thousand Bitcoins, which is Binance's cold wallet. Songdo, a new city in South Korea located in the Incheon area, costs about 20 billion dollars. So that's the comparison.

But this Bitcoin city will also be equipped with airports, plazas, and others. To build only Changi's five terminals, Singapore costs 10 billion dollars. From this data I need to question how El Salvador pays its debts. Moreover, the price of Bitcoin is getting more expensive and El Salvador is a small country with not much wealth.

GDP per capita alone is only US$ 3,798, the same as Indonesia, which is around 3,869 for Indonesia and 37 percent of the people of El Salvador are still below the poverty line. What is the impact on the Bitcoin price?
If indeed this Bitcoin city is built, surely the price of Bitcoin will be very expensive, because there will be hype. El Salvador also bought up Bitcoin for 500 million dollars.

Global adoption is increasingly widespread and if it succeeds it may be adopted by other countries, if it fails Bitcoin will certainly be a joke, this madness will be remembered for all time.

Will a Bitcoin city really exist? Frankly, even though I am a Bitcoin Believer myself, but I doubt this one, because to build a city is not as easy as turning the palm of the hand. We must provide public facilities, logistics, security, administration, electrical energy, and most importantly jobs.

Without jobs, no one will want to move there, even though it is said to be crypto friendly and this is not a 5 or 10 year job. This is a decades-long work with several phases, while the political system in El Salvador only limits the president from being elected to two terms. Without the support of a fanatic or perhaps a delusional lunatic with Bitcoin, this project is doomed to fail.

The next period um, of course, Nayib Bukele is the chosen one, nor does his successor know about crypto and Bitcoin. So I personally think this project is not visible.

Why do I think this project is not visible?
The first one, in my opinion, is the political narrative of President Nayib Bukele. Because the president is trying to be portrayed as a young president who breaks conventional rules. Nayib Bukele is now highly acclaimed by the masses in El Salvador, especially those who are young or from the millennial generation.

And about Bitcoin City, I think it's just a political gimmick. Because in terms of funding, concepts and others are not visible at all. 500 million dollars in my opinion is too little to build a city. I've already mentioned how much money is needed to build an airport, not to build infrastructure, build power plants, buildings, and so on.

500 million dollars may only be able to build one Tower Apartment unit. But according to president Nayib Bukele it only takes 300 thousand Bitcoins to build this city and my next reason is the immature concept. As we can see, the rendering is still raw like in futuristic retro-themed films. To build a city, you need engineers, you need urban planners, who are numerous and expensive. To build the city of songdo in South Korea alone there were hundreds of engineers and urban planners who worked day and night for years before the project was executed.

The development of a city definitely requires very careful planning from experts and I see Bitcoin City being treated like a game in SimCity.

My next reason is that there is no need to establish this city. Okay, it's really cool to have a Bitcoin city. But not necessarily anyone wants to move there. Moreover, most of the people of El Salvador are still below the poverty line. He was worried that even if he woke up the result would not be much different from KangBaShi or the Order.

What is the need for this Bitcoin city, I still don't know other than just the hype and the location itself is far from the capital of El Salvador. You could say it's in the middle of nowhere. Precisely in the East of La Union and near the volcano, which currently only has a population of 34,000 people, less than half the capacity of a football stadium. The nearest town, Shawn Michael, has a population of 500,000 people and is a 40-minute drive away.

But I think this could also be a debt package to buy Bitcoin in large quantities and Bitcoin City was made as a camouflage. I don't know how the project will be executed, that's another matter.

Is this project any hope?
Yes, of course there is hope, because it was informed that El Salvador will buy 500 million dollars of Bitcoin which if the price of Bitcoin goes up 20 times it will be worth 10 billion US dollars. But yeah, it looks like it's still a long way from being able to go up to 20 times.

In conclusion Is Bitcoin city visible?
The development of a city certainly requires careful concepts and thoughts, from the pictures we see on the internet, there is still no mature thought in my opinion. The picture is just a futuristic-style rendering that can't necessarily be applied and I think maybe this is just a political narrative conveyed by President Nayib Bukele to increase his popularity.

Or it could be like I said earlier, this is a debt vehicle. If it's visible, I think it's very far from the word visible. Cool indeed, but the demand for now does not exist. Instead of building a Bitcoin city, start with a smaller project, such as education that is fully funded by Bitcoin.

I'm afraid that this will be a bad image for Bitcoin if the project fails, this can be a joke and joke material for those who don't like Bitcoin from the start.

So what do you think? If there really is such a city, one day I will definitely fly there.