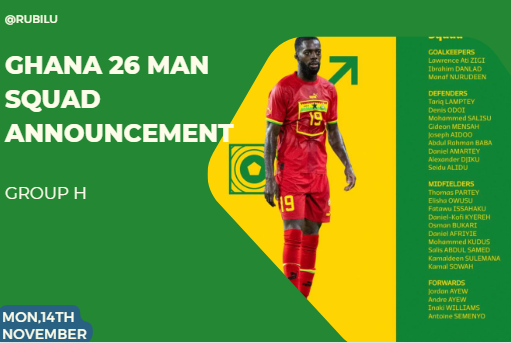 The underdogs of group H have finally announced their squad for the world Cup, sorry should I say our squad. A lot of Ghanaians like me have waited for quite sometime as we gave guessed, pondered and wondered the players coach Otto would call up for the tournament in Qatar.

I call us the underdogs because we all know that this squad is not as strong as the 2010 squad who helped us to reach the quarter final against Uruguay and was the knocked out via penalty shootout. A lot has changed and since then we have rallied behind the black stars to see them bring home a trophy. Whether it's in the African nations

Whether it’s in the African Nations or in fry World Cup. Obviously we know the path to winning the World Cup is vey tight but we are optimistic as ever. I’ve always said that you cannot undermine a team which has qualified for the World Cup. Even though we are seen as the least favorites we can still do something and prove everyone wrong.

Our path to advance from the group stage has been made tougher as we have to play Portugal, Uruguay and South Korea. All three teams have become very strong and if we wanna face reality a lot of Ghanaians don’t think we can advance from the group stage. All we ask of our players is to go to Qatar and play with all seriousness, who knows many some of the players could be scouted by big European teams.

On Monday 14 November, the squad to represent us was revealed. A special ceremony was held like how every other country do it. I was pretty annoyed cause when I switched to watch it there was a lot of talking and talking from people I don’t even think are into football. It took sometime but then it had to happen.

We have been trying hard enough to recruit some top European talents and I think that quest has been pretty successful.

For the goal keeping department we have:

For the defenders we have

Unlike the goalkeepers most of the defenders are from European clubs. As sure we know Tariq Lamptey from Brighton who plays so well, Salisu from Southampton who has been a pivotal figure in the back line of the saints, Daniel Amartey who has also been such a good defender for Leicester City. Most of us must have heard of Baba Rahman too and it was never in doubt that he will be called up.

For The midfield we have

Like the defence there are some stars in the middle too. We all know Arsenal boy Partey who seems to play and have been enjoying life at Arsenal thus far. I think he will be an important asset in the defensive midfield for Ghana. Mohammed Kudus from Ajax who has been on red hot fire. There is also Fatawu who joined sporting this season.

It was never in doubt that the Ayew brothers were gonna be called up. Days before the squad was even released one of the Ayew brothers was already in Qatar waiting for the team. It’s unfortunate that we couldn’t get Inaki Junior to join his brother here but we are more than grateful to have Inaki Williams choose us.

We hope these players can go and lift the flag for us. Even if we are knocked out we will be proud of the boys.

The screenshot used is from here, any others pictures are mine unless stated otherwise

Great, we hoping this time around our guys put up a massive performance so we can conquer the cup this year, 😊

Yep we are all praying and hoping that we can at least qualify from the deadly group we have been placed in.

Partey is a man to watch out for. I see this team playing at least quarter finals.

Partey has been a beast and we are seeing his potential now. However Ghana qualifying from group will be very difficult.