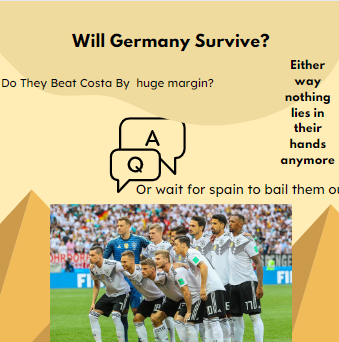 One thing I hate in football is letting the other team decide your faith. But we never ever fail to see these types of scenarios. We have seen it happen to Barcelona for two seasons in a row in the champions league where they have prayed that another team beat the other team or draw so that if they win they can qualify. It has not worked out for them in two seasons and I think they have learnt their lesson.

If you are a Ghanaian you will understand where am coming from. We are soo used to having to calculate how we will see ourselves out of the group stages of the competition. We do so in the Afcon which we rarely reach anywhere. Even in this world Cup, we had to do a few permutations and combinations before we qualified. This always happens if you don't beat the team you are supposed to beat.

Germany was put in a group with Spain, Costa Rica, and Japan. As usual, a lot of people predicted the early favourites to top that group and I think we all know. They tipped Spain and Germany to finish top leaving Japan and Costa Rica in the group. Spain's first match went well when they beat Costa Rica by 7 goals to nil. Germany on the hand didn't go as planned. They got the first goal but then they ended up losing to Japan due to 2 brilliant goals by the Japanese.

If there is anything the world Cup has taught me, it has taught me to never ever doubt a smaller team(even though know this already). Germany, if they had any hopes of qualifying, was supposed to beat Japan before coming up against Spain who is a stronger opposition. They could not beat Japan and from there the calculations began. It started but it was not as intense cause a lot of people taught the Japan vs Costa Rica match will favour them a bit. After beating Germany people tipped Japan to win against Costa Rica but it didn't happen.

This win placed Costa Rica 3rd in the group with 3 points, the same as Spain and Japan. Now Germany had the win against Spain cause losing would have meant getting knocked out of the World Cup. They drew which is better than losing cause they almost lost, I think they could have won it if Sane wasn't scared of facing Simon one on one.

Now here comes the calculations if Germany wants to qualify.

All these calculations when they could have just beaten Spain or Japan to avoid this. But let's see. I hope they can beat Costa and Spain beats Japan so Germany can qualify.

That's the fun part about some of this stuff, it's all over the place! You can never be sure of what's going to happen. I don't watch football myself but I do enjoy seeing some clips of it, it's quite an intense sport, far more intense than the American version!

Football is something that I love and find time to watch. Up until today it still surprises me a lot.

When you say American version do you mean Soccer?

No the American version of football. We call what you all call football soccer but American football with the tackling and all that lol

Am confused 😂. Are you talking of Rugby?

Hahah no check this out, it’s different.

Haha😂. I get it now. I love American football but then I don’t understand how it is played, how the points are calculated and everything. I’ve had the chance to take to someone who played it in high school and he seemed to enjoy it a lot.

He showed us a bit of how it’s played but then I’ve not had the chance of watching a team in action. Along with F1 racing it’s one other game I am trying to add to my radar

Lol glad that you were aware of it! Funny thing is, I don’t even like or watch American football! Some people are huge fans but I would rather do something than watch it lol racing is awesome though but that’s another one. I would watch highlights of that though!

😂😂oh am surprise you don’t like it. I’ve watched it in movies and I like it a lot. I just need to understand it and then I can start watching it. I used to love racing as a kid but now I don’t like it cause I don’t understand the rules.

Spain has been so impressive in this tournament so far that it's inconceivable to see them not beating Japan, right? Also, Germany will surely not experience another upset against Costa Rica, isn't it? Well, football has a mind of it's own.

As for me, I love the party spoiling kind of vibe. Will be interesting to see one of these big lads go home early. Belgium already looks like the favourite, I'll be glad to add Germany to that list.

Haha, I don't wanna see Germany go home just yet. I think with Spain, Japan wont be able to contain them as they wont miss the chances Germany missed against them. The kind of form they Spain are in surprises me a lot as they are relatively a young side. But hey as they say the young ones always have the energy and they are showing it.

Those Spanish dudes are young and well drilled. They have a pattern of play, the same pattern played in their clubs. The core part of the Spanish team is the midfield, and Enrique has his three midfielders operating in exactly the same way they do at Barcelona. However, those young dudes will come unstuck against a ruthless and well balanced team like Brazil or France.

That’s exactly what I’ve been trying to say. The midfield is brilliant with Gavi, Pedri and Busquets but when these guys come up against France or Brazil it will be a while different story.

Don’t forget it’s this same midfield that always seem to struggle when they come up against a strong and ruthless Bayern Munich.

Lol why did you bring Barcelona into this😭😭, I don't see Germany qualifying for the next round I might be wrong but will see how things go. It going to be one hell of a show in the final group stage.

Oh come on bro🤣. It was juts a use case. I wanted people to understand.
I believe they will, The kind of form Spain is in right now am certain they will smash japan and the all Germany has to do is beat Costa Rica.