We all saw it coming for Belgium 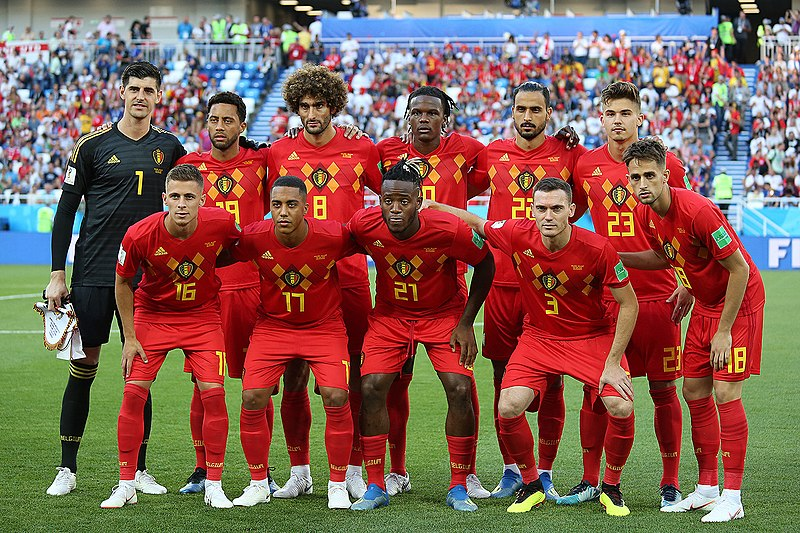 I think we all knew that it will happen to Belgium like this. Against Canada, they were outplayed and were very lucky not to be 3 goals down in the first half. In the second half, it was the same thing but Belgium had to put up one or two good passes and they got their goal. Bashuwayi was left one on one with the Canadian goalkeeper to slot home their first and only goal in the World Cup so far.

Canada was at their very best and as usual Courtois was the talking point for the Belgium team. He did so well to stop Alphonso Davies's penalty from scoring and had a couple of good saves after. As he has always done for Real Madrid he was very good at goal and it was at a very good time for them. It seems this year is a year of saving penalties for him as he has done for real. If I can remember correctly he has saved about 3 penalties for Real Madrid this season in addition to the one he save against Rayo but it had to be retaken because of encroachment.

Today against Morroco it seemed they were not at their best. The only difference between Canada and Morroco is that they were able to take their chances and Canada couldn’t. If Canada had taken their chances the other time Belgium would have been knocked out of the World Cup today after losing to Morroco.

Coincidentally I was scrolling through Twitter today and I saw a tweet where they coated KDB talking about their chances in the World Cup. It said, “Belgium is an old team thus it will be nearly impossible for them to win the world cup”. Looking at what KDB said, it’s absolutely the truth. Look at the French team. It’s full of youngsters on their bench and in their starting 11. They are full of youngsters who can move with the ball and can always call for reinforcements on the bench.

Belgium on the other hand did not find it easy playing against this Moroccan team today. A lot can change in 4 years and we are seeing that in this year's World Cup. The so-called small teams are showing that they have the players to perform even if most of them are not in the top 5 leagues. They have shown that like Canada you only need to have 1 or 2 top players who will dictate how the game will be played and you will get there. Today Ziyech showed his quality and it was only unfortunate that he could not get his goal to stand but his assist was as beautiful as his goal.

Currently, they are 1st in their group with 4 points. Their last game is against Canada who is on the brink of getting knocked out by Croatia. But history has shown that even if a team is out they always wanna show what they are made of in the last game it and it will be dangerous for them. They played well and I hope they can qualify. Just Look at The Ratio man... These upsets are now becoming more often or truly so unpredictable!

Man 9 people voted for morroco. Woah. That’s something. I kind of saw this coming but then I thought Belgium would be trying soo hard to redeem themselves after their shocking performance against Canada. I didn’t for one second morroco could pull it off.

Well, Happens! Let's see what's coming ahead. This is becoming so intense!

It is becoming interesting as I expected it to. Are you timing that first spot?

To be hones, I did not see that coming :D
Yes Belgium is maybe not the top contestand here but agains tMorocco I would have expected a win :D

I didn’t see it coming. I knew morroco could do something but I didn’t think they would do it in this way.

It was a lucky day for Moroccans today. BELGIUM dominated the game, they won possession but the finishing was their problem.

The Moroccans made me proud today. I love it when there's an upset😂

Morroco gave them a run for their money. They were brilliant.

Exactly! I don't know if you watch AFCON this year, this was what happened between Nigeria and Tunisia, Nigeria won stats but Tunisia won the game😂

I watch Afcon haha. The stats game don't just sit too well with me.🤣

Just like how we expect man city to dominate in every game but it doesn't still guarantee them the win.

Anything is possible in this tournament as results have shown that already. Nothing is obvious and why we love sport.

Yep this makes me wanna watch the World Cup more and more. Now Germany too is in hot soup and are on the brink of getting knocked out.

Congrats, keep going like this @rubilu 😉 Have a nice day!

I just hope Belgium will be able to beat Croatia which I doubt and if they lose, they are out of the world cup. But come to think of it, Belgium is not really playing like the country that played the last world cup.

Looking at things I don’t think Belgium can beat Croatia. Crotia doesn’t look too strong but their midfield is one of the best in the world. I think the best Belgium can put up against them will be a draw.

I really hope they dont get knocked out.

Honestly, it may end up drawn. Good analysis.

Belgium did not deserve to win against Canada.

The Central American team was better in several passages of the match and with the performance of Courtois and the bad work of the VAR that did not sanction two clear penalties was enough for Belgium to win, but with what happened against Morocco it is clear that this team no longer works.

Yep I saw the interview where KDB was complaining about their team. I think there is no mobility in the team and this has been their hindrance. They will need to take a bold step in their last match if they do wanna qualify out of their group.

Firstly, the sight of Fellaini, Dembele, Chadli, Januzaj and the likes really confused me.
Secondly, Belgium are my favourite big team to exit at the group stage. I think Croatia will be too much for them. I'm expecting Morocco to get at least 1 point against Canada. If it pans out this way, those warring Belgium guys should go back home and resume their fight.

Haha don't be too mean to the world number 2 according to fifa ranking. I just think the favorites tag is disturbing them too. Its giving them a lot of pressure. A lot has changed in 4 years, we don't expect them to always win as they do.

Honestly, De Bruyne saw through everything and said their is no way they're winning the tournament. They played badly against Canada, were even more appalling against Morocco. They'll need the old players to knit their experiences together if they want to go past Croatia.

Yep they are unbelievably poor. When I watched them against Canada I thought oh it’s just a blip so they will look to correct their mistakes against Morocco. But then this happened. They are in a lot of trouble even if they are able to make it out the group.

It will be a miracle if they defeat Croatia to make it out of that group. When you realise the likes of Hazard, Vertoghen, Alderweireld, Batshuayi are still starting for Belgium you just know their is a problem. New talents should've been blooded into the team after the last World Cup.

A well deserved to win for Morocco, Belgium was horrible on the field and it just showed Canada deserved to win that match. De Brunye has already said his team those not have what it takes to compete in the world cup and his words were true.

Yep and KDB was right after all. The problem and difference with Canada was that Canada were not clinical enough but with morocco they were dangerous on any chance that they got.

This type performance is very disapointing for a team like Belgium. They have strong and world class team,but can't perform well. I think they have internal problem which directly effects the performance. We already known about the controversy between Hazard & Kevin De Bruyne.

I think they have a lot to think about after getting knocked out. Maybe in their next competitions most of this players won’t be even called up.

Yeah! They need to sit for this.