Three Years Completed on Hive Socialmedia 3.0 - It's worth the Celebration 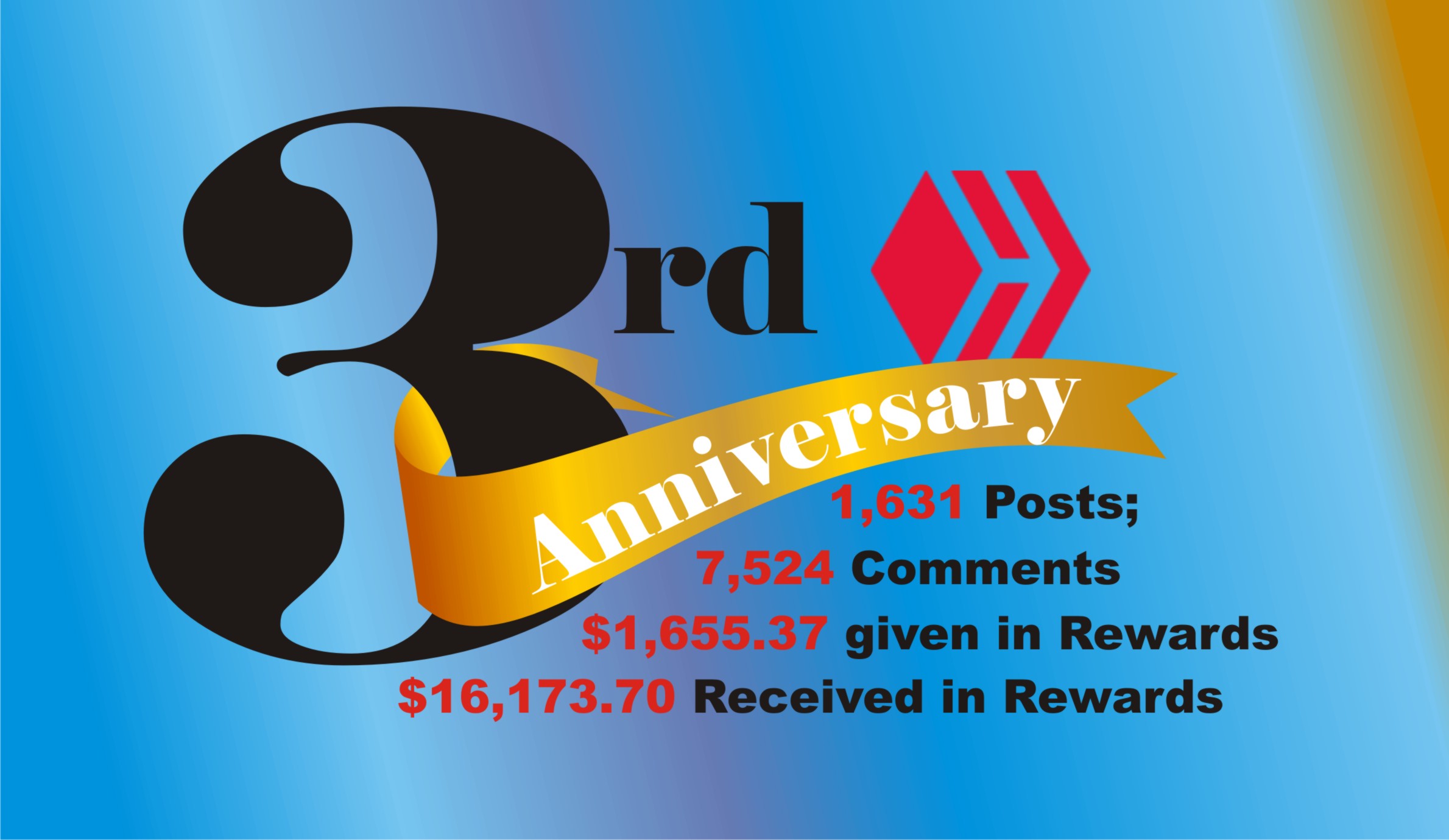 Yesterday, 24th January, 2021 marked the end of three successful years on the Hive Social media. According to hiveblocks.com, the official explorer of Hive, my account @Uyobong was created on "2018-01-24 07:36:42" and started at 25 reputation point. It was exciting to try something new on a new technology - blockchain. I am very grateful to @Tomlee for being the first to have mentioned Steem to me that year. My journey from thence is nothing short of beautiful, motivating, inspiring and rewarding. 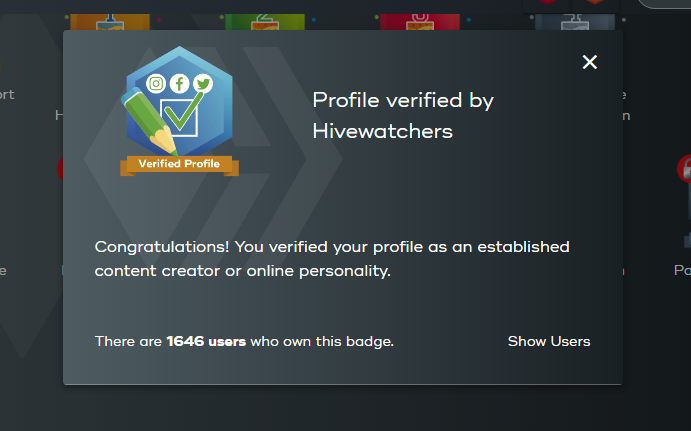 It thrills me to be one of the 1,646 users with verified accounts on the Hive blockchain. Within the past three years of being, it's been full of learning, learning and learning. Thanks to @Hivebuzz for the reminder and the wonderful creation. Each day comes with a pack full of new things I get to hear and know in the technology, finance and crypto world.

Hive has been my first virtual project which other projects coming would build on. I say this proudly as an owner of Hive. I am one of the millions of users who own the Hive blockchain and that I do with my stakes of crypto held on this chain.

It excites me to contribute to the build of the Hive project in the following ways over the last three years: 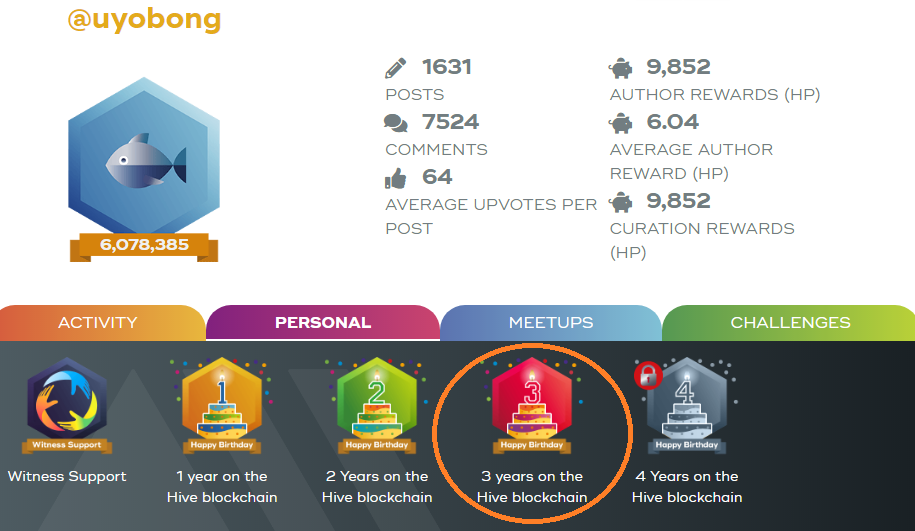 I must say that over the last three years, I have hardly engaged this socialmedia earned several batches of honour, some of which include:

It thrills me to have given out comments more than I received over the past three years I have spent on Hive blockhain.

The engagement were not without it rewards. My data used over the last three years have been well accounted for, catered for and it yields dividends. Indeed, it holds true that data is gold when used on a decentralized socialmedia. 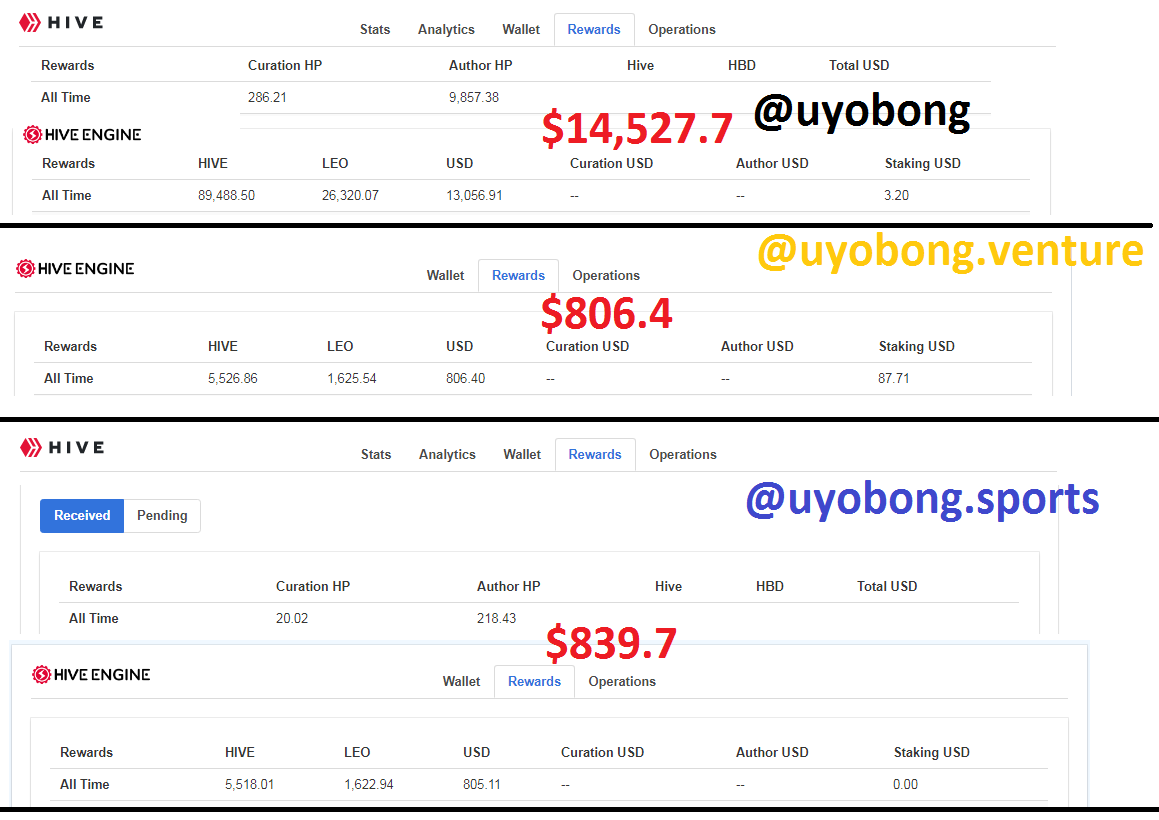 I have successfully earned as much as $16k worth of CRYPTO over these years. The value were computed at $0.145 HIVE price and $0.47 LEO price. Other tokens depend on the above two prices.

It is interesting that I became a key stakeholder in some projects on Hive such as @LeoFinance (LEO, LEOM, LEOMM) @Sportstalksocial (SPORTS) @Clicktrackprofit (CTP, CTPM) @Hivelist (LIST, HUSTLER, HUSTLERM) @Chary (CHARY) @Actifit (AFIT)and many others. 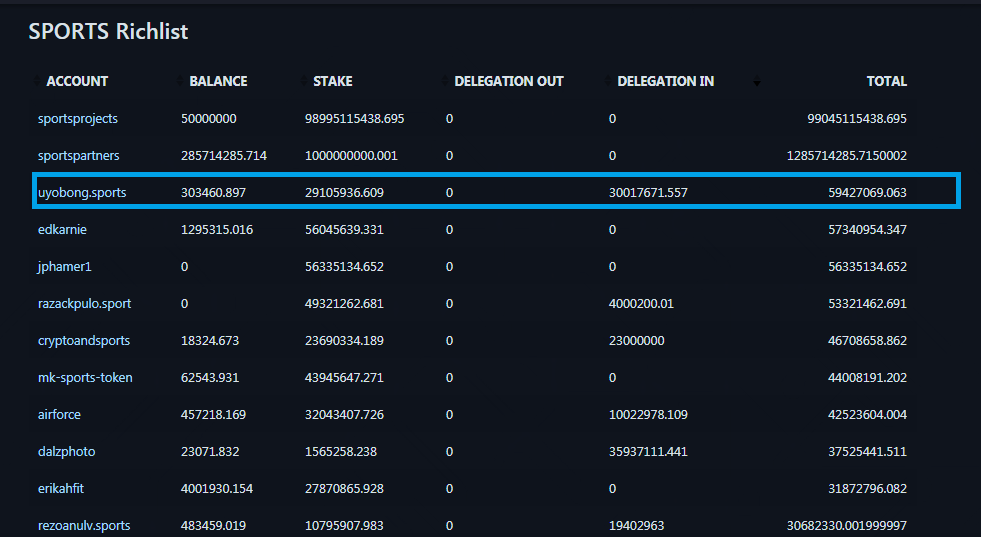 At this juncture, I can say that I joined a true socialmedia where free speech is celebrated and one earns tangible value for his time, data and knowledge shared.

We keep building HIVE as we begin the journey into the 4th year. I hope to double the figures by Jan 24, 2022 when I'll be celebrating my 4th anniversary.

Congratulations @uyobong! Happy Hivebirthday!!! Impressive results for this period. I think here you will get in the next year the results done in 3 years!

Thanks very much for the goodwill. It's been an amazing journey so far.

And how it is said, the best is still to come!

Surely. That's true, however, one must make the most of today for tomorrow to count.

What a journey so far :)

Congrats on 3 years and here's to many many more!

You've been a great supporter and I appreciate it.

Congrats on the 3 year hiveaversary! Or however you would spell that, lol. Thanks for being a huge support to the network!

Congrats on the 3 year hiveaversary!

Still sounding nice. Your ingenuity and creations has made the journey awesome. Thank you.

Congratulations, 3 years of going into investing on the chain and also the second layer. Well-done.

Thanks brotherly. You rank among those users who have really inspired my success here.

You're welcome, hopefully your 4th and 5th year will be filled with even more achievements we can personally see 2020 was a great year. Congratulations again

Of course. I just imagined after 10 years of being here, what my worth would be like. I've spent close to 10 years already on Facebook and Twitter with nothing to show forth.

Congratulations Sir for these successful years you have put into the Hive blockchain and also motivated many to succeed here. Cheers

It excites me reading your comment. I want to inspire more people to succeed here.

Thanks very much. It's worth the celebration.

Congratulations to you, many more productive years to come

Thank you very much.

Thanks for the wine each time. I think I started seeing some fractions drop.

Congratulations @uyobong on your 3yrs anniversary here on hive . You've really come a long way. Many more to come

Thanks Jere. Hopefully, the next year would speak volumes of itself.

Congratulations mate. Hard work pays off. Best wishes to you :-)

Indeed! You've been a wonderful comrade.

Big man, thank you for all you do for Hive.

congratulations sir happy hiveaversary!! indeed its worth celebrating.
thanks for the inspiration

Thank you for your goodwill. We grow and aim for more!

With all this detailed information about your three years journey on Hive blockchain, indeed it is worth celebrating. Congratulations to you sir @uybong for this achievement for the past three years. It is good to know that you not only earned and learned but you also onboarded many users who are making a living out of this. Indeed, you deserve this accolade.

Thanks. Hive is a socialmedia that places no limit on any user. It you will, you can win.

It would be fun to read your Hive anniversary post soon.