As you may know I have been playing chess for many years, specifically in the league for visually impaired people, since 2012 I have been part of the national team we all together have been able to represent the country on many occasions and always bringing excellent results. Our most outstanding performance was in Bulgaria 2018 in the World Team Cup in which we obtained the best performance in the history of Venezuela and we got the 6th place, an extremely important position, an achievement that makes us the best team in America over other powers such as USA, Canada, among others.

This article has two parts which I decided to call: "the objective part" and the "subjective part". The first one of course, is the written part where you will see all the results we have had as a team, so you will come across with lot of standings, tables and more "numbres". The second part is the subjective part, more specifiaclly is a video where I am talking about how this situation is bothering us as a team.

The thing is that despite the brilliant performances we have had throughout our career we have always had problems when it comes to travel, either by budget, poor organization or some other reason unrelated to the sport, has always been a headache, much of this is because unfortunately chess is not among the priority sports that the State attends, that is, as chess is not part of the Olympic Games the economic resources that are allocated to this discipline do not cover all the expenses.

The reason why I make this post is to let off some steam, the truth is not easy ... At this time is playing the "16th IBCA Chess Olympiad for the Blind and Visually Impaired 2021" an event that Venezuela could not go, sincerely our team had great chances, maybe we could have been among the best players in the world once again, but sometimes it is not enough to play good chess, maybe it is unfair but it is the reality.

I want to talk a little about my team and the progress it has made in the last few years, I hope you like it. 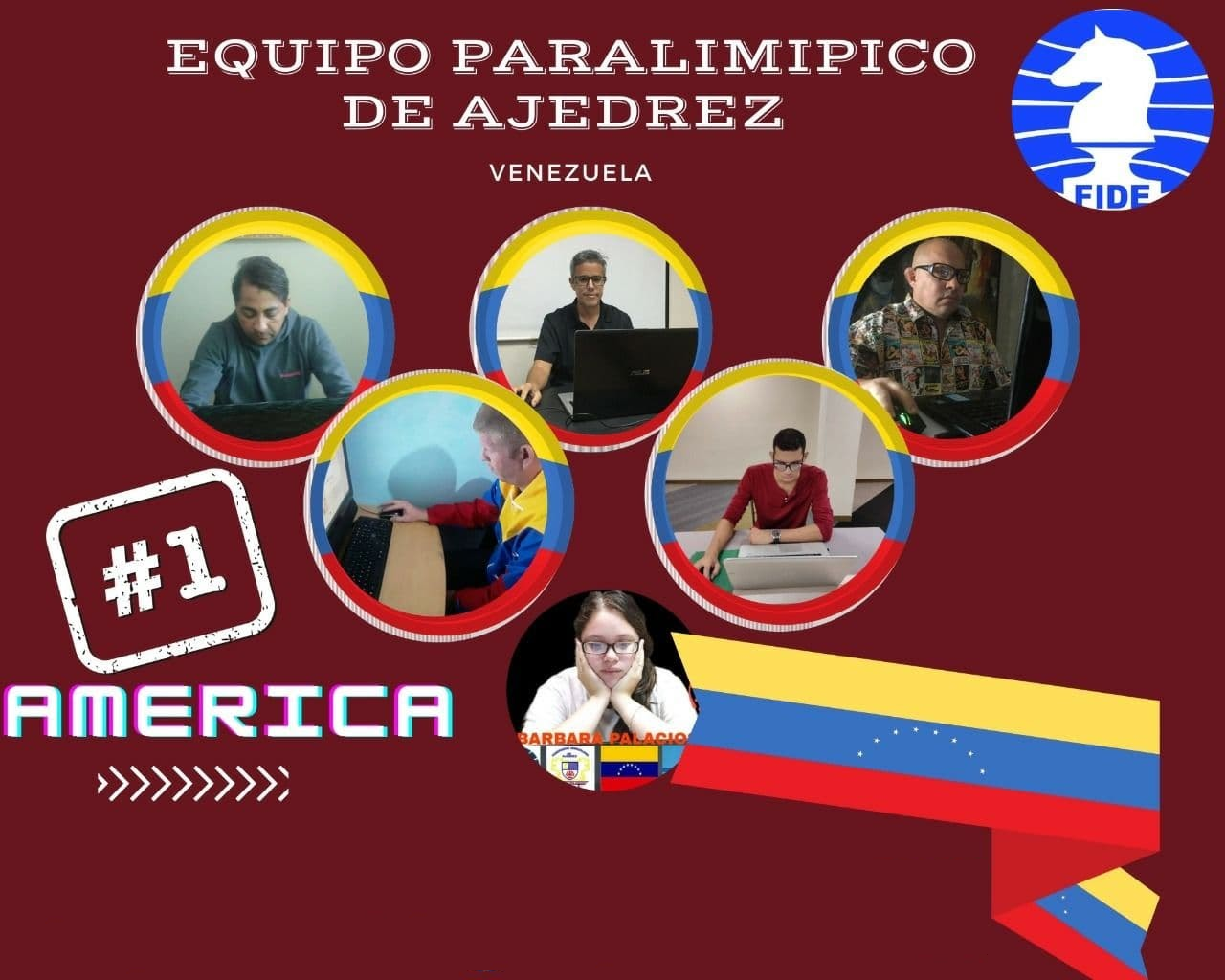 This image was created by EN Monica Navarro - 2020

This was my first tournament out of my country, inf fact the first time I went out of it, in this time I just played one game since I was the reserve player.

In this event the Venezuelan team arrived late due to the lack of expediting resources and two rounds were lost by forfait and in the third round there was a Bye of half a point so the team starts to play the tournament from the fourth round, for all the details mentioned above, the team obtained the eighth place. Check the following link to see the whole results of the event: 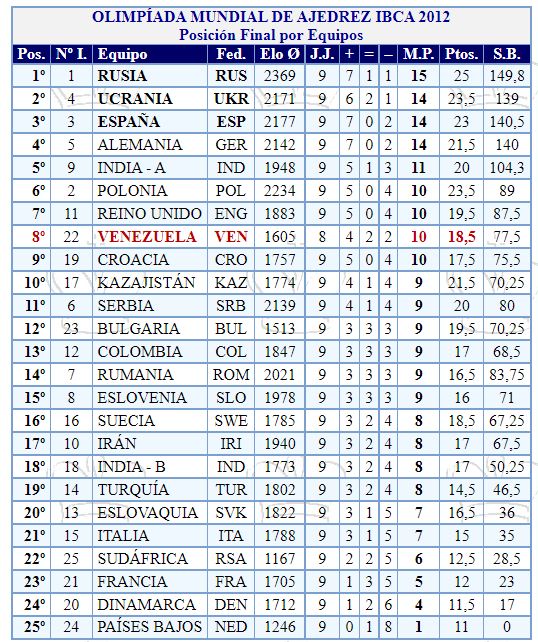 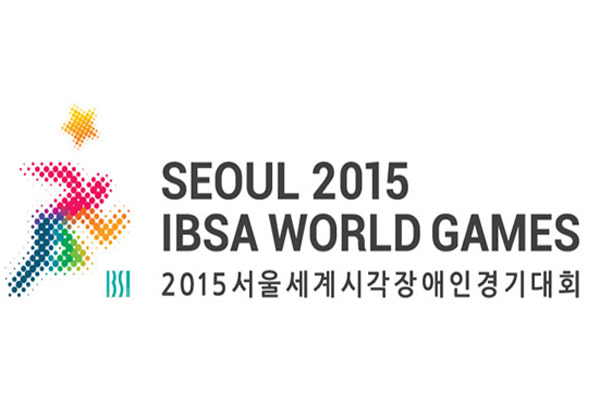 In this championship the team again faced logistical problems, specifically I played from the second round since I had to give forfait in the first round because I had issues with the ticket , the final individual position is attached, in which Venezuela occupies the second place in the whole event by adding the two best individual results. 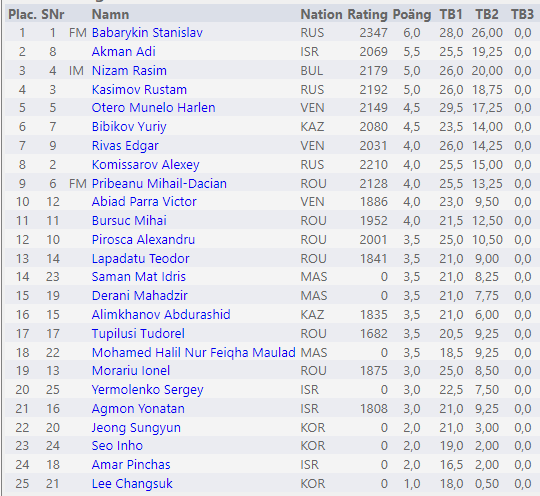 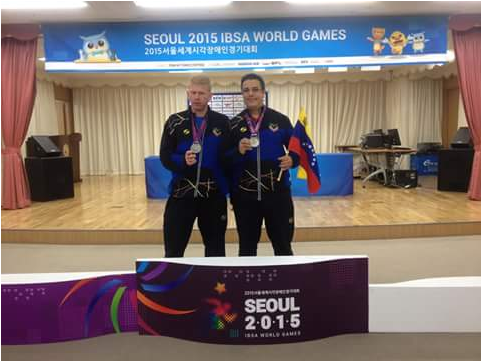 For this event there were adequate logistics, no round was lost but we played with only 4 boards and no reserve, the team was composed of Harlen Otero, Jose Barreto, Edgar Rivas, Victor Abiad. As an outstanding achievement I won the silver medal in the 4th board and the team was ninth, qualifying again to the world cup to be played in Bulgaria the next year. 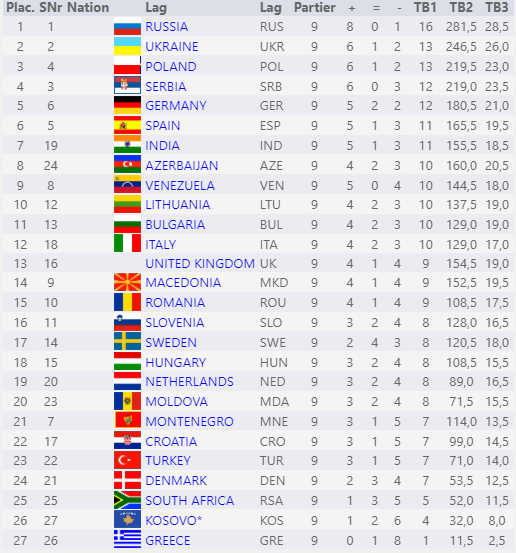 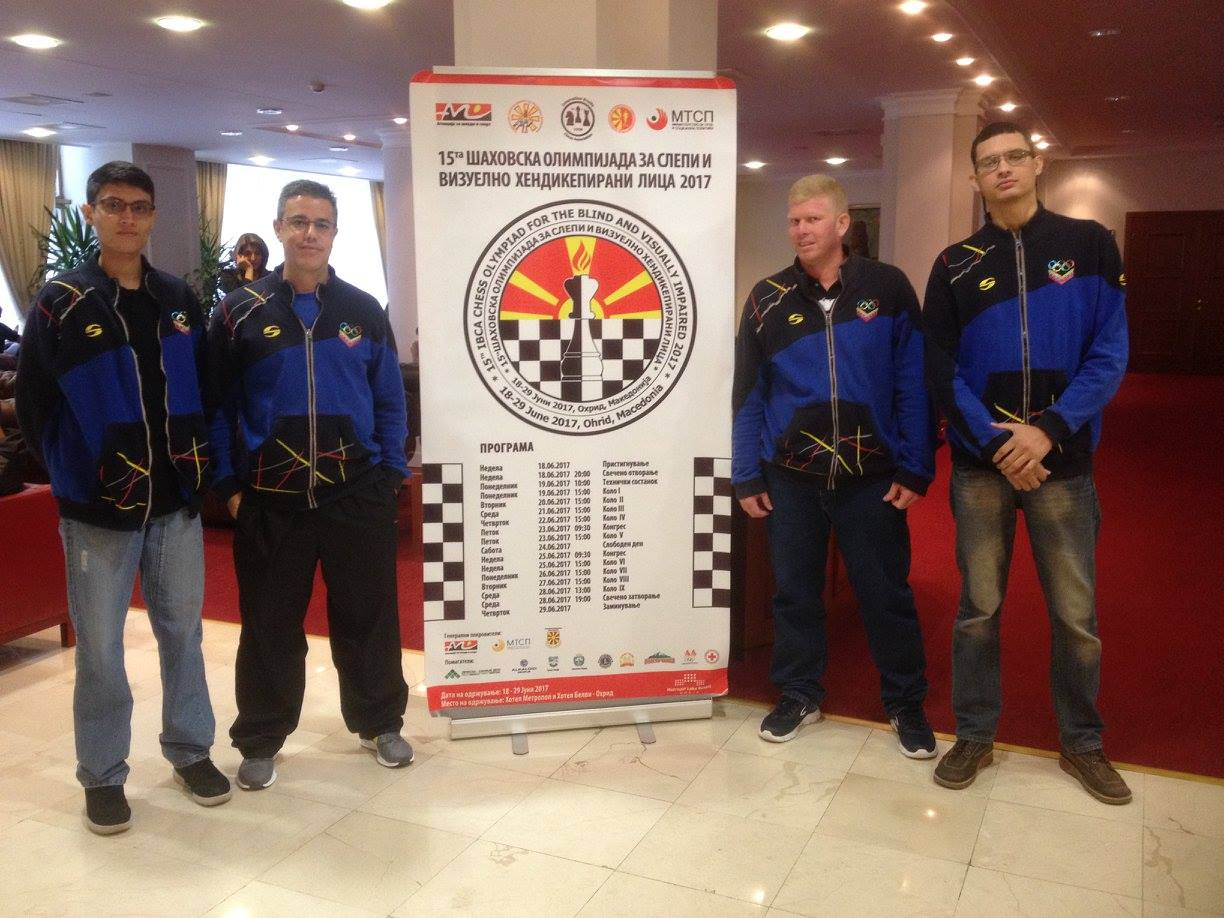 this image belongs to the organization of this event

The performance of the Venezuelan team was very good, considering that we did not manage to arrive on time for the first round and that we arrived at the Sofia airport with just enough time to get to the hall and play the second game against Germany, against which we lost. However, after that, the Venezuelan team did its best and won 5 consecutive games and thus got to fight for the fifth position.

In the round for the dispute of the places, we first defeated the team from India and then lost to Serbia, whom we had beaten in the initial phase. 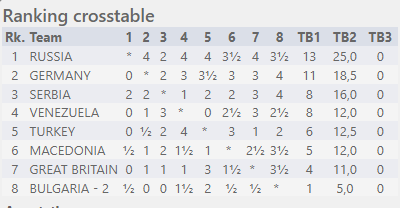 In this event I was part of the American team formed by 6 players, winning the bronze medal individually and as a team. http://fidedisabledcup.tsf.org.tr/ 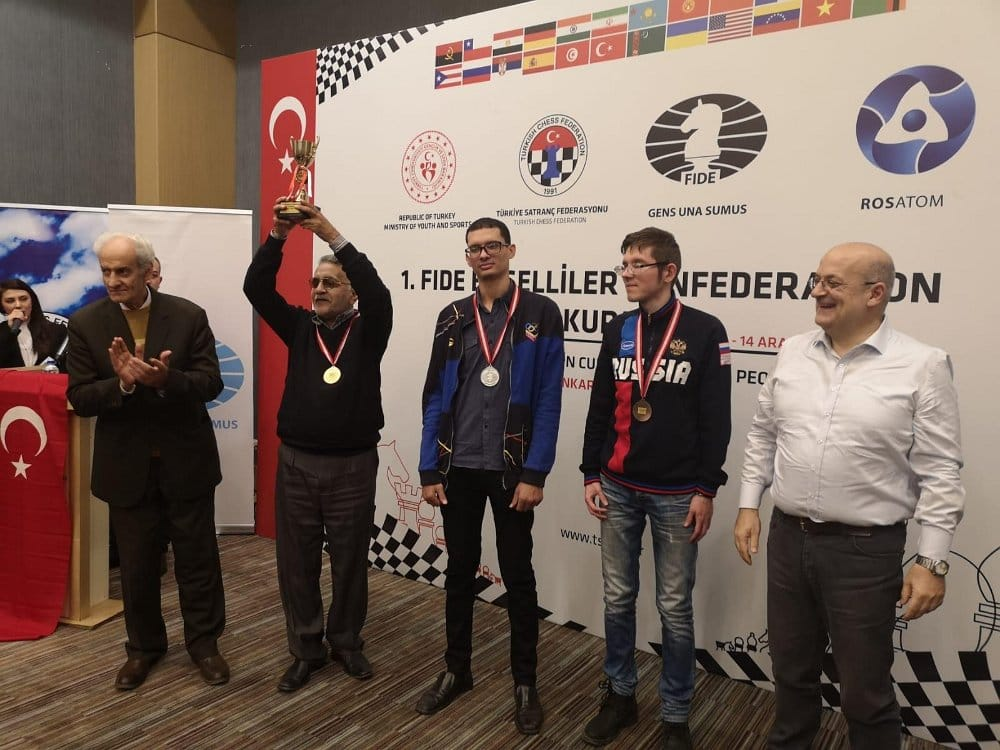 Well, I wrote a whole article for this tournament a year ago so you can take a look:

The fide 2020 Online Olympiads for people with disabilities were held on the platform www.tornelo. com, with the participation of 60 teams from 45 countries, 15 countries from Europe, 13 countries from America, 10 countries from Asia and 6 countries from Africa, the tournament was played in 7 rounds to qualify the 4 best countries to the final, the Venezuelan team for this competition is composed of Barbara Palacios from Monagas, Vanessa Descarrega from Anzoátegui, MN Guiseppe Abatantuono from Distrito Capital, MN Harlen Otero from Zulia, MN Edgar Rivas from Carabobo, EN Victor Abiad from Falcon, Juan Polanco from Falcon, Anibal Rodriguez from Zulia, as a result the team was in 12th position, at the level of countries we were 8th and 1st of the American continent. 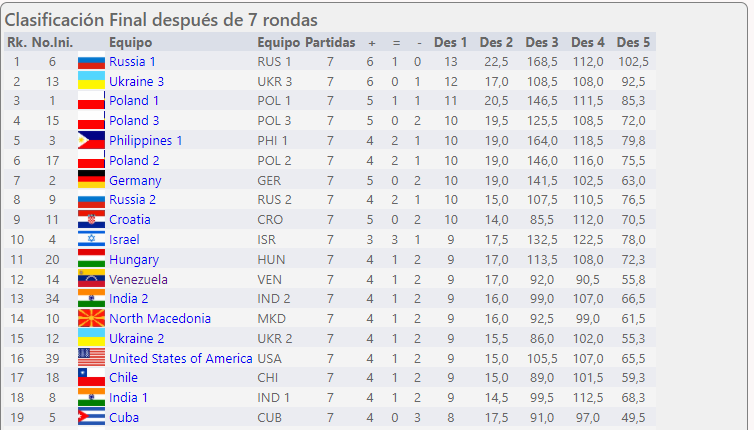 With all the information shown above, it is evident that the Venezuelan visually impaired chess team has a more than outstanding curriculum, a well achieved trajectory with highs and lows and that they have had to face situations that hinder their performance in the competitive part, situations outside the sport. In this 2021 the opportunity to participate in the IBCA Paralympics in its 16th edition was lost, an event more than regrettable because as mentioned, Venezuela is in terms of strength among the best in the world and the non-participation in this Paralympics sets a precedent that leaves much to be desired by the responsible authorities. It is not a random event, what was lost was the starting route of a cycle in which Venezuela as a country has a strong presence, as an immediate consequence the qualification to the next event "The World Team Cup" is lost. On behalf of the whole team, we want to extend our deepest dissatisfaction for the situation we had to face, we do not think it is fair that being a team with high level objective results we should have to go through this field of dark possibilities and even worse, the most affected party is the Venezuelan nation, we reiterate once again, not participating in this event is an offense to the team and the country, we hope that those responsible take action and establish a mechanism to rectify all the damage caused.

As you can see our team has been able to obtain incredible results over the years, it is very sad that this 2021 we could not travel to Greece to represent our country again, we can only wait for the next event. I hope that in the future athletes will not have to worry about these things and will be able to play as smoothly as possible.

Thanks for reading and see you this weekend!

Check out @stayoutoftherz's posts and join the #HiveChess Friday tournament on lichess.org, also @schamangerbert's posts to join the Saturday Blitz Chess Tournament and now on Sundays you can enjoy the Chess Brothers Chess League @chessbrotherspro

Wow, Victor. I'm sad you guys couldn't make this time. It's been a tradition already that you represented Venezuela in this competition. I am in solidarity with you. Let's hope this won't happen again.

Thanks and i hope the same as well 👍

@vjap55, I glad you shared this impressive story with us. You are a proud patriot and represented for your country. You have accomplish a lot very quickly but I am sure your journey is just beginning.

PS: I have a chess set similar or the same as the one in your video; however it weaken (blunder) my play a little because of the different visual image I was accustom to.

Thanks my friend, i have to say that it is a little bit complicated to play in such a board haha it is only to show lol

Congratulations @vjap55! You have completed the following achievement on the Hive blockchain and have been rewarded with new badge(s) :