After the shock of seeing Argentina defeated by ... Saudi Arabia. Some HODLers of the Argentina Soccer team are feeling more than shame. They are also experiencing financial pain. 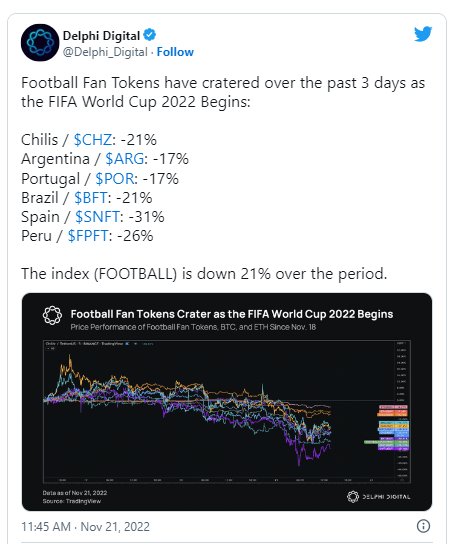 buyers to vote in some decisions made by sponsoring teams in addition to enabling access to some rewards.

What is quite weird is that investors/traders are acting like these tokens would somewhat financially benefit from a victory of the country they are representing.

So far, nothing is hinting that there would be such financial gain or even NFTs to get through holding the winning's team token.

Stay safe and don't gamble too much ;),

Fan tokens, as the name suggests, are intended for people who are emotionally attached for the teams. So, such tokens are going to bought and held by those who are loyal whether their favourite team is at the top or bottom of the league. Price moves based on a single game, on the other hand, suggest nothing more than degen speculators who bought such tokens at the account of brand recognition, many of whom, I suspect, don't have a clue what football/soccer is.