Yesterday I posted the first part of the series which you can check here. Brace yourself for some more laughs as I present the top funniest football sponsorship deals of all-time. English club Scunthorpe had a disgusting looking jersey in 1994 which appears inspired by confetti at a kids party. There's no doubt however the jersey sponsor Pleasure Island made every fan curious where the island of debauchery was. Unfortunately it was only the name of an amusement park which ended up closing in 2016.

Scunthorpe's away kit in 1994, sponsored by Pleasure Island was one of the worst kits we have seen. Does anything beat it? pic.twitter.com/f5w1pOl7L5 — Football Remind (@FootballRemind) February 16, 2017

AC Milan's Pooh Jeans jersey sponsorship is one of the funniest of all-time. Milan jerseys were emblazoned with the word "Pooh" across the front much to the delight of rival fans. Unfortunately in Italian the word doesn't refer to human excrement and is the name of a casual jeans clothing brand.

Oxford United's jersey sponsorship deal with Wang Laboratories is one of the funniest of all-time and seems a ridiculous sponsorship deal today. It wasn't a deal with someone's male anatomy. Wang was a computer company that tried to complete with IBM and Oxford won the League Cup in front of 90,000 with their Wang's proudly on the front of their jerseys.

All the while with WANG emblazoned proudly across their chests. Marvellous stuff. pic.twitter.com/hgTPTFkB8E — These Football Times (@thesefootytimes) April 20, 2022

One of the funny football jersey shirt sponsorships of all-time is St Johnstone FC's, which accurately reflects the mood of the clubs fans during the early 90s following strong top tier performances after spending some time in the lower divisions of Scotland. Bonar Textiles is a textile company, but just the word Bonar appears across the front of the jersey.

Although not a sponsor, Peruvian football club Deportivo Wanka has their club name written on the front of their jersey in the form of D.Wanka. There's an innocent and less entertaining explanation to the jersey reference with the previous inhabitants of the area known as the Wanka people which the club is named after.

There but for the grace of God go I ! Deportivo Wanka Wanker Polmer Home Shirt Peru 2002/03 pic.twitter.com/fS4Q6e4XxN

Angry Birds developer Rovio partnered with Everton in 2017 on a £1 million a season sleeve sponsorship deal. Wayne Rooney was always seen as a ticking time bomb waiting to explode so the partnership between Rooney and Red makes it one of the most funny football jersey sponsorship deals of all-time.

Funny story. My Mrs is Chinese and her family name is Wan. Her mum (a non-English speaker) suggested that as a Chinese name for my eldest son he be named Wan Ke (family name always goes first in China) which in Mandarin is pretty much pronounced wanker. I quickly suggested that we think of something different although to this day I’ve never explained to my mother in law why calling a kid Wan Ke might not be the best idea when he attends school in England!

I was about to say D. Wanka when I saw the confetti one too. I saw it in the comment section and I couldn't stop laughing. Angry bird signed as a winger 🤣🤣😂😂🤣.

Bonar, D. Wanka, Angry birds.. Lol. Were they not aware of these things??

I loved Parma outfit, because they found a brand that had their named too, parmalat, that's a milk company. 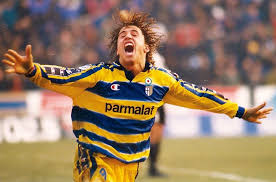 Oh now that's a classic! Thanks for sharing!

Having been born and raised in Mexico, Club América has always been my team and I still have some of those jerseys with Bimbo and Coke (Coca-Cola) as the front sponsors of the club's apparel.

Nice! I think they're a classic. Good colourway combo too

I love the colourway in América jersey! That very particular yellow with mostly blue combinations, I mean they're my team and they have had horrid jerseys, but most of them are a classic as you well say!