I'm a huge football fan - we are talking about a round ball here for my American friends - you guys call it soccer.

My favorite thing was always playing football. My football went everywhere with me, and whenever I get half a chance, I was out kicking ball with my mates. There were times when my mates weren't there, and at times like that the trusty wall at the side of my house did the job as I kicked it and volleyed it and then tried to control the rebound, and of course I could practice my keepy-uppies. I managed over 1000 a few times.

Of course being a kid who grew up on the West coast of Ireland, we were no stranger to rain - lots and lots of rain! So on days like that, I would either watch football on TV or play football computer games.

My first ever football game was called Nintendo World Cup and I absolutely loved it. Looking back on it now, it is laughable, and looks like something a couple of 5 years made after watching a 3 minute tutorial on youtube :o) 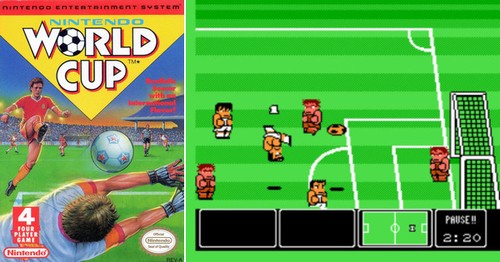 Here is the beautiful little grey box which gave me hours and hours of entertainment as a child on those wet and windy afternoons. I'm thinking about Duck Hunt and Mario Brothers. These by gone days were before memory cards, so you switched it on, you started at the very start and off you went. I remember getting to world 8 on Super Mario Brothers 8, the lava level, I must have been hooked up to it for 8 hours at that stage, and my Mum had been telling me to turn it off for quite a while, but I managed to convince here to give me 5 more minutes.... 5 more minutes..... 5 more minutes.... Eventually she had to flick the trip switch at the fuse board to knock it off. Ha ha... Anyway, I digress, back to the point at hand, football games and their evolution. Lets look at Video Games now and 30 years ago
The easiest way to make a comparison is to look at a little bit of video footage of two football games - one recent and one 3 decades ago. With that in mind, I'll post some videos at the end of this post to remind you. The first one was made in 1990 by Technōs Japan and was the first football game I ever played.

The second one is FIFA 2021, this is one of the staples of soccer games the world over - the other one is Pro Evolution Soccer. Most soccer gamers are an avid fan of one or the other. I started off with FIFA, went to Pro Evo for a few years and came back to FIFA.

The first FIFA game ever made was called FIFA International Football and it was released for Christmas 1993. I remember playing it on my cousins Sega Mega Drive that Christmas and I was instantly hooked. It was an amazing advancement from Nintendo's World Cup Soccer. It was on another planet altogether, and it was the greatest leap over the years in my opinion. Sure, the graphics are phenomenal now, but the added play-ability which Fifa International Soccer brought was sensational, and it was a game changer. 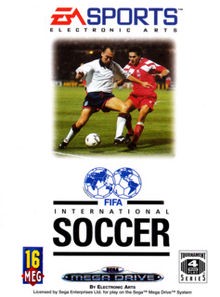 Soon after, I got rid of my Nintendo and bought a Mega Drive instead, and of course it came with the pièce de résistance EA Sports FIFA International Soccer!

Rain was almost welcomed at times, as I hung up my boots and got stuck into some great virtual games with my mates. I had four remotes for my Mega Drive, so we could play 2 vs 2 which was such fun.

From here on FIFA brought out a new game each year, and every year they add more and more features and the graphics get better and better.

If you are a kid growing up today and FIFA 21 is your first football game, then count yourself lucky. The contrast to what we started out with couldn't be more stark, but I guess living through the evolution helps me to appreciate the improvements all the more.

Here are the two video clips as promised. Try not to laugh too much at the first one. That's my childhood you're laughing at! 😃 😃 😃

Did you play any football games growing up?

Were you a Pro Evo or FIFA boy/girl?

What was the first football game you played?

Do you play other sports games?

I'd love to hear all about it in the comments below.

The photos are not mine and the sources are as follows:

Thanks a lot for stopping by to read. The first football game I had was on the Gameboy for the 1994 World Cup. Scoring was ridiculously easy! All you had to do was cut in from the wing and aim your shot at the opposite corner!

Most recently I've been playing Fifa games on the PS4 but life doesn't afford me that much free time to really get into them. Back in the day I played a lot Pro Evo and always found the overall game play and career mode better than Fifa.

The most enjoyable football game I played was Fifa 98, Road to the World Cup. I spent a large number of my teenage years playing that game with my mates while we should have been at school. I'd probably have developed a cure for cancer or brokered world peace by now had it not have been for the Sony Playstation ruining my education. Nevermind!

Highlights of Fifa 98 Road to the World Cup

Now that's what I call a comment! Sorry for the delay in getting back to you. Things have been mental my side, as we are moving back to the West of Ireland where I come from.

I had a soccer game on the gameboy too, i think it was Fifa as well and as you say it was piss easy. My first game I got addicted to was Fifa International football on the Megadrive.

EA SPORTS - ITS IN THE GAME - That really takes me back! Hours and hours of fun. I was always a Fifa head, but a house mate of mine was Pro Evo, so we played a bit of both and I ended up preferring Pro Evo in the end. We used to have class matches against each other..

We never played together like you and your friend taking American Samoa to the final, that was some buzz I'd say 👏👏🍻

I must have had that game too, as I distinctly remember Blur Song 2 from a football game - belter of a tune. WAHOOOOOOO!

No problem mate, hope the move went well and you're settling back in. West Ireland must be a lovely place to live

Amazing how technology has just made certain games that much better. You should have used the #hive-gaming tag in your tags at the bottom of the post. Next time as it is also sports related so no problem.

Ya the graphics these days are nuts. It's crazy what 30 years does in technology terms. I wonder what craziness awaits us in 30 years from now?

I for one would recommend type controls and rules around artificial intelligence and robotics. The potential use cases and associated risks of things that could go wrong are frightening.

Thanks for the #hive-gaming steer too. I'll remember that for next time 👍

Yes I loved this console!! I actually found it recently all dusty and banged up in my parents shed - I'll make a post about it soon. I wonder what game is in it? My money is on Mario Brothers 3. I loved that game! 🎮

Haha brother gee, it made me go back to the past but a lot. I remember playing soccer on a console called Atari that was the first one I had. And before that, he played in the small fields made of wood and nails, where the nails represented the players and the ball was a meter or dick as we call it here in Venezuela, which was propelled by a pallet. What a time brother greetings.

Ah the Atari!! Class... My too older brothers had one, but I wasn't allowed near it!!

That homemade game sounds amazing, we did lots like this as kids too, using our imaginations.