During the last weekend, it was a little slag down for Manchester United as they played a draw game with Leeds United. It was a hard event i couldn't believe though it was a great plus to the Leeds for breaking the limitation other clubs couldn't break for themselves. 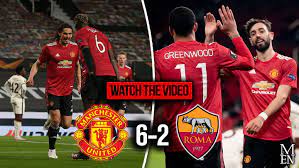 As it happened again yesterday 29th April, 2021, A clash between Manchester United and Roma took place Old Trafford. It was a storming clash for Roma players as the Red Devil couldn't give the chance breath.

To me, i knew the Roma's game with Manchester United will be a sure winning game, but I didn't have in mind to predict the goals to be much. Of a truth, Manchester winning the game with such a large gab of goal aggregate is really a sign to show that they have gained back their momentum which will even help them to win the cup.

If i may predict the mind of Manchester United Manager "Ole", i can feel him thinking in his mind, dreaming and having the joy of winning the cub and raising the cup for the team as the new manager of the team....... being a coach is being a leader who dreams and think of beautiful pleasures for the team.

The Momentum vibes was awaken as Bruno Fernandes opened the first goal for the team at about 9 or 10 minuets after the game started. It was a frustrating moment for the Roma as they were scored a goal at such an early moment of the game.

As the game was still on the push, i strongly believed that Edinson Cavani will have at least a goal before the end of the match. i really loved Cavani's effort in encouraging his team mates on achieving the victory for the team. one reason i love him is his ability to coordinate and ginger his mates for successful game. His effort triggered others to do more than what was expected of them and that earned him a chance of the scoring the second goal and the spirit of victory became high in the team.

Though manchester United was pressurizing Roma, Roma didn't take it easy on them took. they fought back to equalize as Lorenzo made a nice kick to score a Penalty and Edin Dzeko tried his best to give back strength and hope to the team until when the third goal was scored by Edinson Cavani, the Red Devil's vibes boaster kept on doing his best to achieve victory that is above compromise.

I felt good about the is match when i was watching because i push by Manchester United was growing higher than what i expected. Not too long Bruno Fernandes kick a penalty on target and Paul Pogba dropped his kick on the net to complement is yellow card hahahahaha. this is so funny at this point as Mason Greenwood scored the last goal.

Believe me, Manchester United with this move will take the Europa League this season. I can see the fire burning in them. All they need is maintaining a good formation and changing when need be. if any mistake is made, they may loose the victory at quarter finals and i don't wish that to happen. Roma has really raised their momentum and the victory will be theirs........ Up Manchester United.

For sure Man utd are in for this title this season, thanks for sharing @anicorn.

Yes, i have the energy in then. Thanks for reading.