Who Will Join The Queue?

Today's semi-final is breathtaking, after 90 minutes of play, there was no winner and the match was taken to penalties shoot out which Italy won it and book their ticket to the Euro 2020 finals that will take place at Wembley come Sunday 11th of July, 2021. 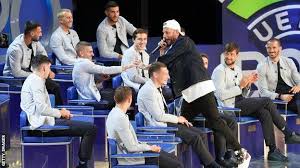 It was a tight game in which Spain dominated possession but Italy was able to deliver the first punch on the 60th minute of open play but they were pinched back through Morata's goal on the 80th minute that took the game to a penalty shoot-out.

The Spaniard national team play beautiful football during the competition and luck was on their side, they defeated Croatia and stun Switzerland on penalties to make it to the semifinals but today, they ran out of steam as they are dumped out of Euro 2020.

Tomorrow will see England lockdown horn with Denmark and the question remains, who will join the queue to the finals come Sunday.

Italy deserves the win and they deserve to play the final but the penalty is anybody's game and luck was on their side as they saw Spain through.

With fans lightening up the atmosphere in Wembley, I must say this is one of the eye-catching displays from both teams as they play with their mind, experience, and eyes on the trophy. 90minutes of football is what any fan would ever ask for especially with the tournament looking more interesting than ever before and tomorrow will decide who will play the finals with Italy and who will play with Spain for the 3rd place finish. I love what I saw today because from the start to the finish was filled with excitement and engagement. Italy and Spain thank you so much for putting up a brilliant performance in today's game and setting up the finale.