Brazil suffers but manages to defeat Chile 1-0 and reaches the semifinal! (ENG + ESP) 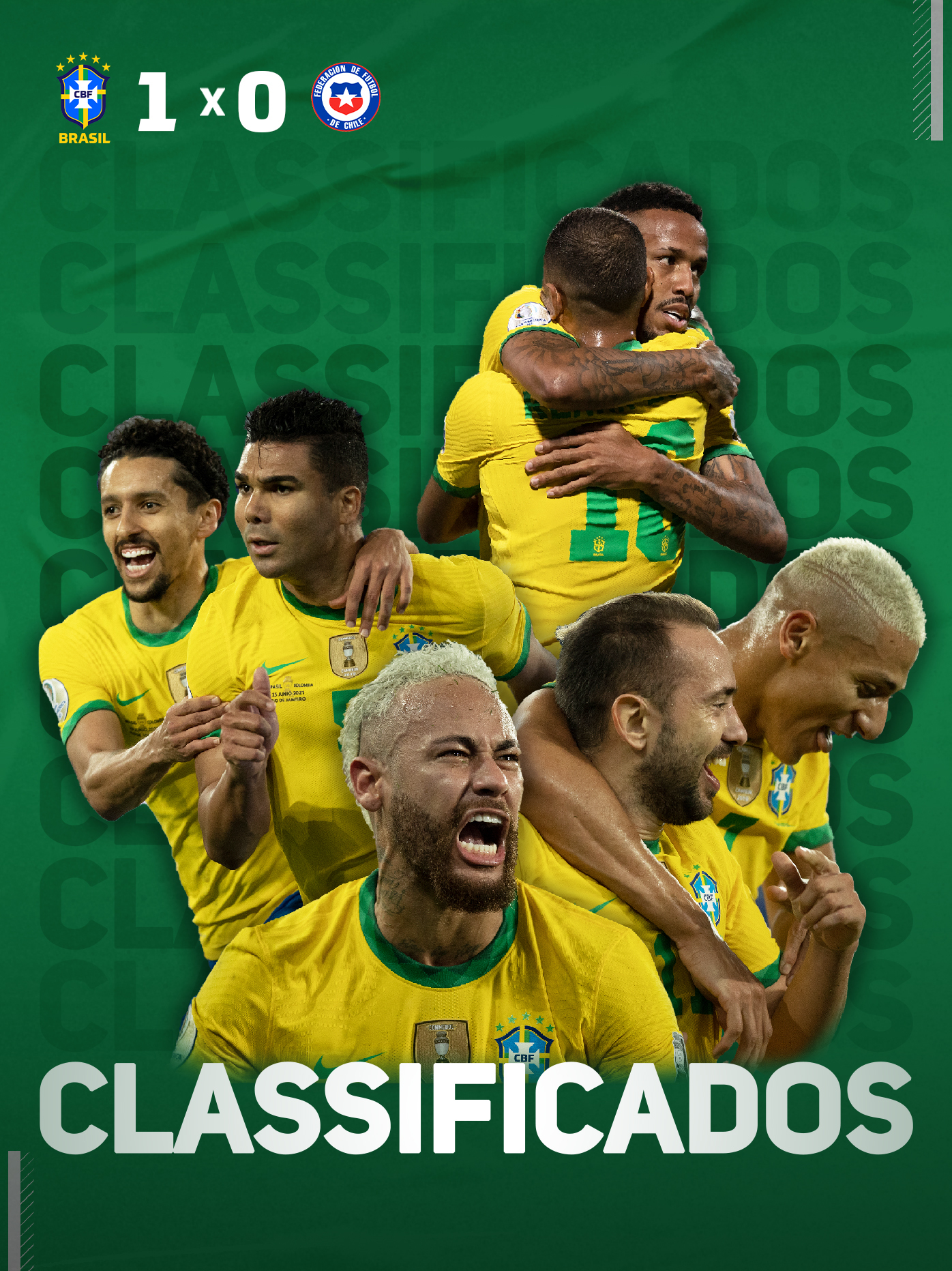 Brazil has been the best South American team in the past couple of years. In the history of football, they are the ones with the most World Cups, but Argentina has also had their good moments and they have been better than Brazil during some periods.

The previous Copa America was won by Brazil, and one important fact about that tournament was the absence of Neymar. He couldn't play in the tournament because he was injured so the best Brazilian player was Coutinho. This time, Coutinho is injured, Neymar is healthy, and Brazil is once again the favorite to win it.

Chile's national team doesn't have an important history in football, but in the past decade they played 2 Copa America finals against Argentina, and they won both of them in the penalty rounds. Those matches were an incredible triumph for Chile and very traumatic moments for Argentina.

This made the match much more interesting because we were seeing the previous 2 champions of the tournament playing against each other.

At the beginning of the match, it was all very even. Brazil wasn't able to create good attacking plays, and Chile was at least able to approach the Brazilian penalty box a few times. The best attempt was a very potent shot from a Chilean player from outside the penalty box that ended up being stopped by the goalkeeper.

Neymar was the best player on the pitch by far, and his moves, as well as his passes, proved this. He was the one who activated Brazil's attacking moves, and the player creating the best plays throughout the pitch.

Not much happened during the first 20 minutes or so. Around the 27 minute mark, after a free-kick by Neymar, Chile did a great counterattack thanks to Vargas and a little mistake from a Brazilian player gave away the ball to Vargas which allowed him to run directly to the penalty box. He didn't have a good angle so the shot was stopped by the goalkeeper but it was a very important goal attempt.

By this point, I was very happy seeing Chile standing up to Brazil. They were having a good performance and even though Brazil was the favorite it was clearly possible for Chile to surprise everyone and score the first goal.

The most exciting plays were Chile's counterattacks. Brazil was mostly focused on positioning its players in attacking formations and it was possible for Chile to do some quick attacks while the majority of the Brazilian players were far from their penalty box and defensive areas.

Brazil did most of the attacks during the first half, and I didn't like seeing them attempting crosses after crosses. Instead of trying to get into the penalty box through the center of the pitch. They advanced by the sides and then they attempted a cross into the area. I believe Brazil has enough talent to create plays in the center of the pitch, but they were too busy focusing on the sides. They don't even have a tall striker to do some headers so attacking this way didn't make much sense to me.

The best goal opportunity in the first half happened around the 42-minute mark. Gabriel Jesus, who was very inactive in the match up to that moment, received a good pass from Neymar that allowed him to get inside the penalty box with a positional advantage compared to the Chilean defenders, he dribbles a defender and finds himself in a very good position to score, but Bravo, the Chilean goalkeeper, heroically stops it. An opportunity as good as this one should never be missed because football always makes you pay if you lose your good chances to score.

Gabriel Jesus is one of the Brazilian attacking players along with Firmino and Neymar. He plays for Manchester City and is generally a good striker. This is why I didn't expect him to miss that chance. So far, he has scored zero goals in this tournament, so might be getting a little bit anxious due to the pressure to score his first goal.

In the second half, Brazil made a substitution, Paqueta enters the pitch and Firmino went to the bench. I didn't expect Firmino to go to the bench because this is a very important striker. He plays for Liverpool and is always present in the lineups. He is good at collaborating when creating attacking plays and is a very reliable striker. However, this substitution proved to be positive for the team.

Seconds after the second half started, Brazil did a series of passes that caused a mistake in the Chilean defense and this left Paqueta almost alone in front of the goalkeeper and he scored with a good shot. The passes between the Brazilian players were good but the mistake from the Chilean defense was key for the goal. Paqueta had just entered the pitch and the first ball he touched was already a goal. Impossible to have a better start of the match for Paqueta.

Not even a minute has passed and the second half was already better than the first one. A couple of minutes after the goal, something surprising happened. Gabriel Jesus, the Brazilian striker I mentioned before, gave a kick in the face by accident to a Chilean player while trying to control a ball. It looked like a karate kick and it hit between the neck and the face of the Chilean player. The foul was an obvious red card and the player was ordered to leave the pitch. Brazil was now playing with only 10 men on the pitch.

If they had an emotional boost after scoring their goal, now that boost was neutralized by the red card. Brazil was still in a better position because of their goal, but playing with 1 extra man increases the chances of Chile tying the match.

Around the 62 minute mark, Chile scored a goal that would be disallowed due to an offiside, this scared Brazil because with a 1 player disadvantage scoring a second goal would be almost impossible. They needed to defend their 1 goal advantage with everything they got.

Shortly after that disallowed goal, Neymar did a great individual play and almost scored an amazing goal but his definition was stopped by the Chilean goalkeeper. With that play, Neymar proved once again how fast and skilled he is.

The last 20 minutes or so of the match were mostly Chile approaching the Brazilian penalty box, and some counterattacks from Brazil from time to time lead by Neymar. Chile had a couple of goal attempts during those final minutes but with no luck. They even had a header hitting the post, but nothing that could tie the match.

In the end, Brazil resisted almost the entire second half with a 1 player disadvantage and they were able to defend their goal. This wasn't an easy victory for Brazil, they really suffered and ultimately, they achieved a well-deserved victory and classification to the semifinals.

I was happy with both team performances. Neymar was very active during the entire match and he clearly wants to become the best player of the tournament. Casemiro was good in the midfield, and in the Brazilian defense, both Silva and Marquinhos were great at defending. On Chile's side, I especially liked how Vargas played. He was very energetic, and most of Chile's good plays had Vargas participating in them one way or the other. Vidal also had a good match as always.

Chile was unlucky to play against Brazil in the quarter-finals. I am sure that have they played against any other team, they would have reached the semifinals. This was a decent performance from them, and I am sure all Chilean people are happy with their team.

The next matches I plan to watch are the semifinals of both the Euro and the Copa America. These matches would happen on Monday, Tuesday, and Wednesday. We are now reaching the climax of both tournaments and all the remaining matches are a must-watch for any football fan.

My wish is to see a Euro final between Italy and England because I believe those are the best remaining teams in that tournament. In Copa America's final, I would like to see Brazil vs Argentina, in what would be the first historic duel between Neymar and Messi.

Congratulations @dedicatedguy! You have completed the following achievement on the Hive blockchain and have been rewarded with new badge(s) :