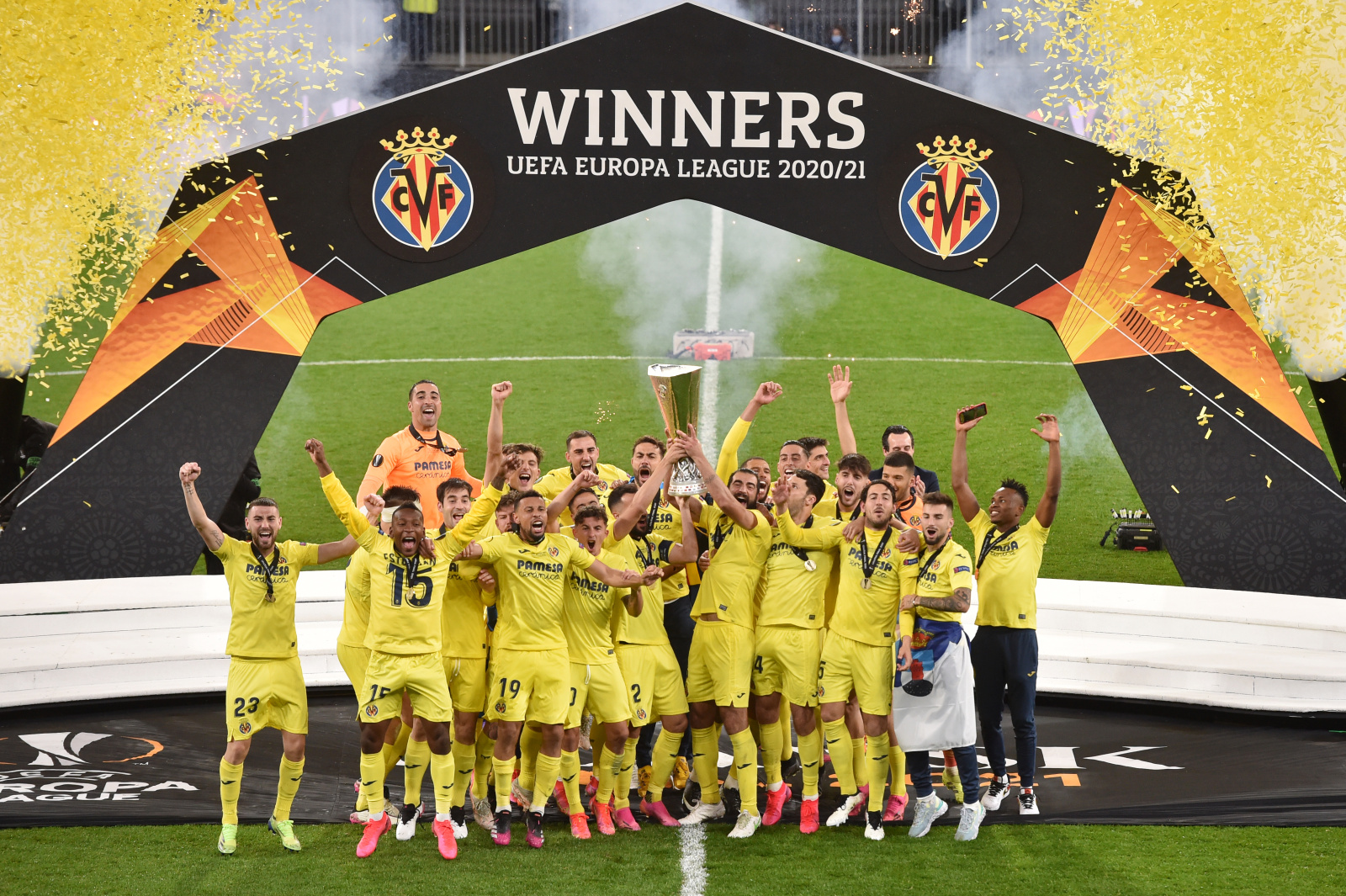 Yesterday I was able to watch the Europa League final between Villarreal and Manchester United. This tournament is the second most important continental tournament after the Champions League and in order to qualify for this tournament, the teams need to achieve a high position in their national leagues.

In the main leagues, such as the case of the Spanish, British, Italian, and a few other leagues, the teams that qualify for the Europa League are those that finish in positions 5 and 6. There are other ways to qualify for this tournament such as finishing in the third position in the group stage of the Champions League or winning the national cup.

The team that wins this tournament automatically qualifies for the Champions League of the next season, which again, is the main continental tournament, and this team will also face the winner of the Champions League in a one-match little tournament in the summer called UEFA Super Cup. Despite its imposing name, this trophy is not that important because it is only just 1 match.

In some years, there are legendary teams that usually compete in the Champions League participating in the Europa League usually because they had a decrease in the performance the year before. When this happens, these bigger teams are obliged to win this tournament. Such is the case of Manchester United this year.

Exactly 10 years ago, this team was playing the Champions League final and they were one of the best teams in their country. Today, they still remain one of the best in their country but the last time they won the national league was in 2013. It is clear Manchester United has suffered some decrease in their performance in the past few years but this didn't prevent them from being the favorite to win in yesterday's match.

Villarreal, on the other hand, usually participates in the Europa League. This team hasn't won many trophies but they are a very competitive team usually achieving a good position in the Spanish league. I believe it would be fair to consider Villarreal as the fifth biggest Spanish club after Real Madrid, Barcelona, Atletico Madrid, and Sevilla. Achieving a European final is a huge goal for them and I am sure Villarreal was the team most excited to win yesterday's final.

To summarize, Manchester United is the bigger and historic team and therefore, the one obliged to win. Villarreal is the smaller team and it doesn't have much history so therefore, they are the most excited to win the trophy.

The match started with Manchester United having more possession and Villarreal adopting a conservative attitude. Manchester is the more dominant team so it wasn't entirely surprising to see them attempting to take the initiative. Pogba was very active touching a lot of balls but with no much efficiency nor creativity.

Villarreal was very focused on closing space around the area of their penalty box but that didn't prevent them from taking the ball sometimes and attempting some attacking plays. Manchester United controlled the possession but it seemed to me they were kind of lost with it, like if they weren't sure what to do with so much ball possession. They were doing high pressing and overwhelming Villarreal's defensive players but they weren't creating sufficient high-quality attacking plays to score their first goal.

Manchester United's strikers were Cavani, who is a veteran and excellent goal scorer, and Rashford, which is much younger but also much faster and is a bit more versatile when it comes to moving around looking for open spaces in the rival's defense. Villarreal's strikers, on the other hand, were Moreno and Bacca, 2 good strikers but with not as many previous successes as Cavani.

Despite Manchester United being a bit more dominant in the first half, the first goal was scored by Villarreal after a free kick by Parejo who was then slightly deviated by Moreno once the ball reached the penalty box and it went in. This goal happened around the 29 minute mark. It was a lucky goal I guess, scoring after a free kick or a corner kick can happen at any moment in the match and even though there might be tactical movements in some of these goals, the majority of the time is just luck.

The goal was surprising for me because I wasn't expecting Villarreal to score but this is what I like about football, it can surprise you in just a few seconds and completely change a match. If Manchester United was already obliged to win this match simply due to the fact they are the bigger team, they now had much more pressure than before.

As the minutes kept passing by, it was clear that important players such as Pogba or Cavani weren't creative enough to generate dangerous plays in order to score a goal. One of the best players of Manchester Unite is Martial, who would have been extremely useful in such a challenging match but unfortunately for him and his club, he hasn't recovered from an injury and was unable to play.

Villarreal's strategy was now to resist and try to defend this 1 goal advantage for as long as possible but just like they were lucky in their goal, Manchester United also got lucky in a similar play. This time, instead of a free kick, it was a corner kick around the 55 minute mark, the ball ends in Rashford's boots at the edge of the penalty box, he shots the ball bounces on another player but it ends up under the control of Cavani in front of the net. It was a super simple goal by Cavani and one that was only the result of luck. In neither of the 2 goals there was any strategy at play, only spontaneous movements and lucky circumstances for the scoring team.

It is fair to say the football could in this final could have been of higher quality but let's not forget this is just the secondary tournament, the main one, the Champions League, has its own final this Saturday and I am expecting that match to be much better.

After Cavani's goal, Manchester United got an emotional impulse and they showed much more impetus and aggressiveness compared to Villarreal's temporary worries and passiveness. I thought they were going to score their second goal but luckily for Villarreal they resisted and the tie remained.

Rashford had what I believe to be the worst missed opportunity in the 69 minute mark, and right there I thought this missed attempt was going to cost them dearly. They weren't creating many good opportunities despite having a lot of ball possession, and missing easy chances is usually a costly mistake in these circumstances.

During the remaining of the match neither team had many goal attempts. Maybe both of them were nervous about suffering another goal or perhaps it could have been all the accumulated fatigue throughout the season, especially because the past summer the teams weren't able to have a proper pre season which is one of the reasons why I believe many teams suffered a lot of injuries in this season.

The regular 90 minutes ended, the extra 30 minutes started and almost nothing changed regarding the creation of new goal attempts and high quality attacking plays. As the minutes kept advancing it became clearer and clearer the players were either comfortable or resigned to decide the winner in the penalty round.

When I was younger I loved watching matches getting decided in the penalty round and that remains true even to this day. Since I was a neutral viewer there wasn't any tension in me watching the penalties. The same cannot be said about fans of either team because deciding a final by the use of penalties in one of the most anxiety inducing ways to do it.

Regular penalty rounds have 5 penalties for each team, and if they are tied after the 5 penalties, then they both shoot new penalties until one of them misses. Usually there is a winner after the 5 regular penalties but sometimes things can take much longer than that. In this match, they needed 11 penalties per team! Of the 22 penalties only 1 player missed it, which is something I have personally never seen before. Maybe I have but I honestly don't remember when was the last time 22 penalties were needed to decide a winner. This wasn't normal but it was super enjoyable for me to watch this :D

Now Villarreal has finally won its first continental tournament and will be facing the winner of the Champions League in the UEFA Super Cup in August. This victory also allows Villarreal to participate in the Champions League of next season. Manchester United, on the other hand, just screwed their only chance of winning a trophy this season and will surely do their best next season to win something.

The next match I plan to watch is, as mentioned before, the Champions League final this next Saturday between Chelsea and Manchester City. It is the best match of the year involving clubs and I am quite excited about it. Later on, in June, there will be both the Copa America and the UEFA European Cup having matches during the same days, and I plan to see the best ones during the 4 weeks these tournaments last.

Let me know what do you think about this victory from Villarreal and who do you think will win the Champions League? Personally, I believe Manchester City will win, but it will certainly be a very even match.

It was an interesting showpiece; been a while I watched penalty shoot-outs of such calibre. Kudos to Villarreal on their first continental trophy.

I agree mate, the penalties were the best part of the match. It was a worth watching match thanks to those penalties lol

Villarreal did a nice job, looking forward to seeing their performance in the Champions League.

I believe they will do a good job next season, and with that I mean they have good chances of reaching the round of 16.

I have never seen such an exciting and tense penalty shootout, too bad for De Gea but someone had to miss.

I am very happy for Villareal as this is their first international title.

Me neither, De Gea looked quite nervous before taking the penalty although who wouldn't be nervous in those circumstances right?

Very good victory for the Yellow Submarine, this shows that there is no small rival and we must not underestimate the enemy, for something he got to that point and tripped. Greetings brother good description of the meeting.

Thanks mate. Yes, football is always capable of producing all sorts of surprising results. Good for Villarreal, it is always nice to see a team winning a big trophy for the first time.

What a match and what a great night of dramas 24 penalties was played,but we must all agreed that Villarreal is a destined winner and we must agreed that they deserve it, congratulations to them