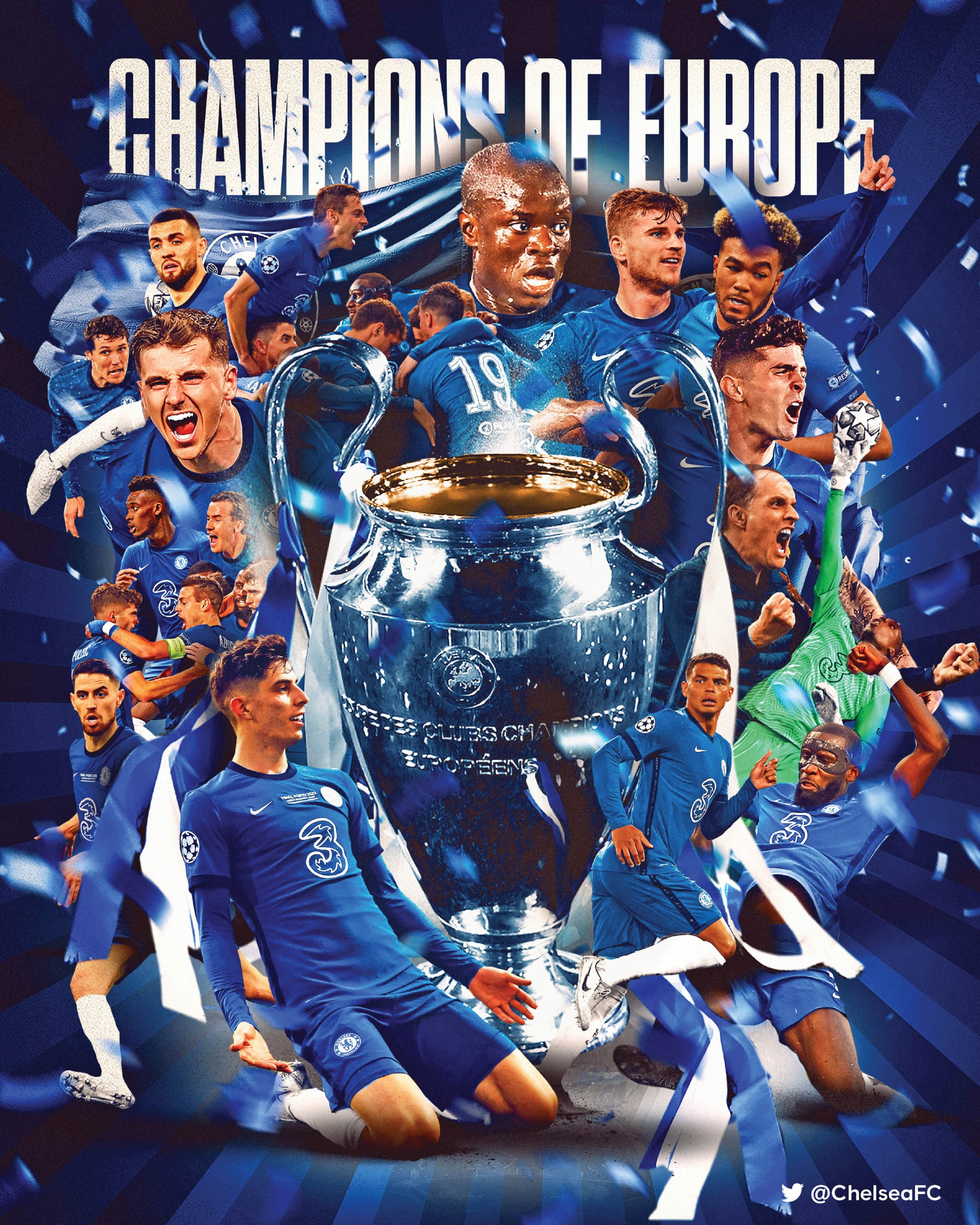 Yesterday I was able to see the most important match involving football clubs of the entire season, the Champions League final. This is a tournament where only the best teams of the main European leagues can participate and has been considered as the most prestigious club tournament since its creation.

This season's final was between 2 British teams, it isn't common to have 2 teams from the same country in the final but it has happened several times in the past few years. Chelsea already won this tournament for the first time in 2012 against Bayern Munich, but all of Chelsea's players who participated in the match are now either retired or have left the club. The current players have no experience winning this competition, and Thiago Silva, a veteran defender who just arrived last summer, is the only Chelsea player who has participated in a Champions League final. He did it last season with his previous team, PSG, but they lost the match against Bayern Munich.

This season wasn't an easy one for Chelsea, they had a hard time in the league throughout the season and were lucky to finish in the fourth position. In the national cups, they weren't able to win either of them even though they achieved the FA Cup final but only to lost it against Leicester City. The Champions League final was their last chance of winning a trophy this season.

Manchester City, on the other hand, had a great season. They had some trouble at the beginning of the season to consistently score goals, but eventually, Guardiola figured out a way to make his teamwork. He decided to play without natural strikers and this produced awesome results that allowed them to win the league, and the Carabao Cup, which is the secondary national cup in importance, the main one being the FA Cup. Winning 2 trophies in a season is awesome for any team, and the possibility of winning the Champions League meant this could be the best season in the history of the club.

In summary, we had Chelsea hoping to save their kind of mediocre season by winning the most important trophy, and Manchester City hoping to make an already good season into a historic one.

Manchester City began with a lot of energy and doing intense high pressing in order to generate mistakes in Chelsea's defense that could allow them to score a goal. It was clear that Guardiola wanted to score the first goal quickly and then play a little bit with Chelsea's frustration but that wasn't what ended up happening.

Chelsea began with a more conservative attitude, letting City control the ball and patiently waiting for their opportunities. Chelsea was ready to play the long game and wasn't anxious to do anything too risky in the first few minutes.

Despite City's being the team taking the most initiative, it was Chelsea the one more effective with their attacking plays. The first dangerous attacking play happened around the 9-minute mark and was created by Chelsea but it was missed by Werner who wasn't able to make a proper shot. Seconds later, City responded with their more dangerous play up to that point.

Around the 13 minute mark, Chelsea's players proved once again how fast and dangerous they can be. They created another attacking play that was finished by Werner again but sadly for them, he once again missed the opportunity. This time he did a weak shot easily stopped by City's goalkeeper. City was controlling the ball up to this point but the best plays were lighting fast and created by Chelsea.

Chelsea was able to create good attacks without giving too many touches to the ball while City required many more touches that were sooner or later interrupted by some Chelsea players. It was harder for City players to stop Chelsea's attacks due to how fast they were. After the first 25 minutes or so both teams reduced their intensity.

Thiago Silva had to left the pitch due to an injury around the 38-minute mark. This was an important loss for Chelsea because Silva isn't only the leader of the defense but also one of the best in the world in his position and a true veteran. However, I didn't notice any difference in the defending performance of the team after Silva left the pitch, which means the substitute played as well as Silva.

The first goal was scored around the 43-minute mark, Chelsea caught City's defense by surprise, Haverts received a long pass from Mount that left him almost alone in front of the goalkeeper, dodge him, and scored an easy goal in front of an empty net. This goal was possible due to City's open spaces in their defensive areas. They were putting too much focus on their attacking movements and as a result, were leaving spaces that were exploited by Chelsea's fast attacking players.

This goal was also an important psychological factor because it happened right at the end of the first half, which means it surely conditioned whatever happened in the mid-match discussions between players and coaches.

Chelsea wasn't the only team who suffered an important injury, during the second half, De Bruyne, who is probably the best player in Manchester City, got injured and was forced to leave the pitch, this happened at around the 59-minute mark and was caused by a strong hit that left him with a black eye, or rather a kind of purple eye. This was an important blown for City because there is no other attacking player who is as skilled as him in the team. The guy even left the pitch crying and this was very sad to see but injuries and hits like this are actually common in football.

During the second half, there was a lot of tension in both teams, and the pace got slower. This might have been caused by accumulated fatigue. Chelsea didn't have many good attacking plays in the second half, they were more focused on defending their 1 goal advantage. City's players had a hard time dealing with the frustration of being at a disadvantage, which for them isn't common. Guardiola did a lot of changes in an attempt to figure out how to tie this challenging match but the truth is Chelsea's defensive players were absolutely top-notch.

City almost tied in the last minute with a great shot from Mahrez that passed only a few centimeters above the post. It would have been a spectacular goal but I guess it wasn't meant to be. By the end of the match, City's goalkeeper was in the midfield line and the entire Chelsea team was either inside their penalty box or very close to it. They resisted Manchester City's attacks and were able to win this great trophy for the second time in the club's history.

I believe Tuchel and Guardiola are 2 of the greatest coaches in today's football and this match was a clear victory for Tuchel. His strategy to create quick attacking movements with as few passes as possible resulted in a well-deserved victory, and his defense was also able to effectively stop City's attacks.

The next matches I plan to watch will be from the UEFA Euro and the Copa America. Things will get interesting in those tournaments in July after the group stage is finished but there are a few matches in the first 2 weeks that I plan to watch.

There is an important discussion that the football community needs to have and it is related to the best player of the season. There will be a lot of candidates and I believe the UEFA Euro and the Copa America will be of big influence in choosing which one was the best, but for now, it isn't an easy choice.

I plan to share another article doing a general review of the season very soon maybe tomorrow.

Great win from Blues, defiled the odds. Who would've believed at the beginning that they would?

Many congrats to the team. Well deserved

Yes, at the beginning of the season no one would have thought Chelsea would end up winning the Champions League. The same happened in 2012, they won it even though they weren't the favorite ones.