Paqueta scores again, Brazil dominates the match, and we have the first finalist! (ENG + ESP) 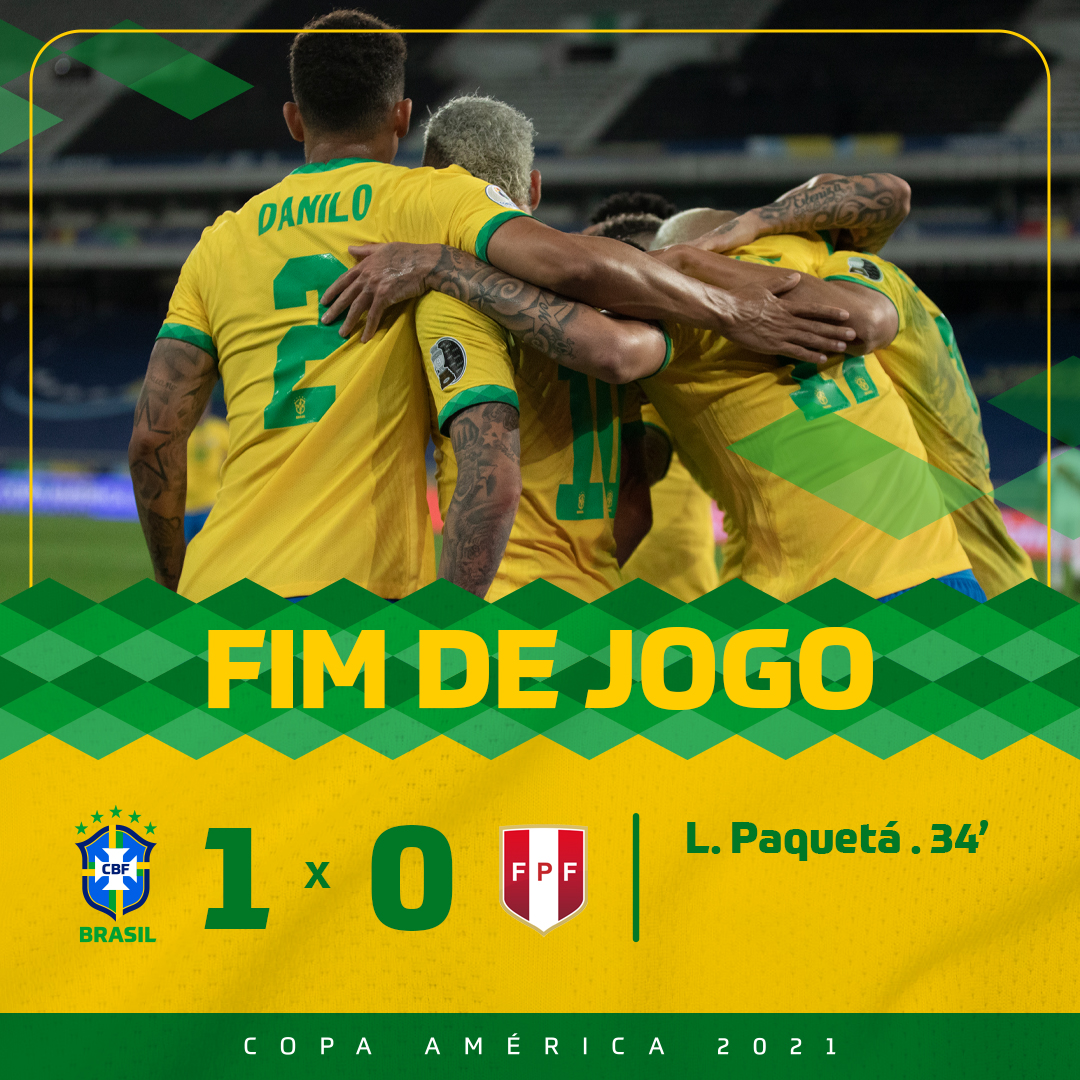 Last night I was able to watch the first semifinal of the Copa America between Brazil and Peru. These 2 teams were the same that played in the final of the previous Copa America in 2019. This tournament is usually played every 4 years, but after the 2019 version, they decided to make the tournament in the same year as the UEFA Euro. It was meant to be played last year, but just like the Euro, it was delayed to this year due to the pandemic.

Brazil has been the best South American team for quite a while, I would say that from 2018 they became the best, in the first half of the previous decade the best ones were Argentina and Chile. They are currently enjoying what could be described as a golden generation. They have excellent players in all parts of the pitch and are clear candidates to win the next World Cup, as well as this Copa America of course.

Peru is never the main candidate to reach a final but they usually manage to have a competitive team, and it is not a surprise to see them participating in World Cups as well as having a good performance in the Copa America. Everyone knows that Brazil is the favorite for this match, but I still decided to watch it because in football there can always be surprises and this match could be more even than previously expected.

Brazil began the match controlling everything as expected. They controlled the ball completely, and pretty much all the attacking plays were from them. Neymar was having all sorts of fun doing more dribbling than usual, and it felt like it was just a matter of time before Brazil scored its first goal.

All Peru did was defend their penalty box with everything they got, and wait for the best. They hardly tried any attacking play and I thought they were like a sitting duck waiting to be shot. It truly felt like Brazil could have easily scored at least 2 or 3 goals, the problem was they keep missing their chances.

The best chances for Brazil in the first 15 minutes were a couple of long shots by Casemiro, including a free-kick from him as well. All those shots were stopped by the Peruvian goalkeeper time and time again.

Brazil approached the Peruvian penalty box several times, and there was one goal attempt around the 19-minute mark that left Neymar in a very good position to score but his shot went straight to where the goalkeeper was standing. In the first 30 minutes of the match, the Peruvian goalkeeper was the best player on the pitch, even better than Neymar.

Brazil was great at approaching the Peruvian penalty box, and also great at creating good goal attempts, but they were awful when it was time to finish the play and score the goal. They were playing without a natural central striker so this might have had something to do with this.

The first goal happened around the 34-minute mark and was caused by an error in the Peruvian defense. Neymar started to run and dribble everyone from the left side of the pitch. Peru had their defensive line in front of their penalty box and there was also a lot of open space which allowed Neymar to arrive inside the penalty box, and then he began his dribbling moves from there. He passes the ball to the center of the penalty box, and Paqueta, the same player who scored in last match, scored easily from the penalty dot. The key part of this play was Neymar dribbles and pass, he completely outclassed the Peruvian defense at that moment.

Before that goal, I was suspecting this match could potentially become uncomfortable for Brazil if they didn't score in the first half but luckily for them, they did score, and from there, things got much easier.

This goal confirmed Brazil's complete control and allowed them to play without any pressure or anxiety. Even after the goal, Peru was incapable of creating any attacking play during the remaining minutes of the first half. Brazil's control of the match should have allowed them to score the second goal in the first half, but this team is having a hard time scoring during the previous 2 matches. In the group stage they scored a lot of goals, they even had a match against Peru in the group stage and they scored 4 goals against them, but now it seems more difficult for them. The first half ended with a totally neutralized Peru, and a very comfortable Brazil.

The second half started and Peru began with a different attitude. At the 48 minute mark, they had their first important attack, which began with a long pass towards the left side of Brazil's penalty box, the Peruvian player was able to dribble the Brazilian defender and made a great crossed shot that was stopped by the goalkeeper. The entire play was very good, and it could have been a great goal. In the first 3 minutes of the second half, Peru had already caused more danger than in the entire 45 minutes of the first half.

This proved that Peru was able to tie the match if they were lucky enough. It was unlikely but not impossible and that tie would have made the match much more entertaining. Another dangerous shot by a Peruvian player happened around the 60-minute mark, this time the shot was from the border of the area, and once again the Brazilian goalkeeper stops it. Peru seemed like a completely different team in this second half, they were now finally focusing some of their energy on attacking plays, and not just waiting to stop Brazil's attacks like they did in the first half.

Brazil was still the dominant team but Peru was also having its chances in scoring a goal, and this made the second half more exciting than the first one. Maybe Brazil was getting comfortable with their 1 goal advantage, or maybe they were just a bit tired after attempting many attacking plays since the beginning of the match, but the fact is, Brazil's intensity was reduced and Peru's attacks increase but only during the beginning of the second half. From the 70-minute mark onwards, the match seemed kind of jammed. The players began to do more fouls than usual, Peru was trying to achieve their heroic tie but were having trouble creating any attacking play, and Brazil was also a bit uncomfortable because having just 1 goal advantage is not enough, especially if the rival team is playing intensively. However, not much happened.

Neymar gave some good passes, first to Richarlison and later on to Vinicius but neither of them did useful things with the ball. On Peru's side, they had only 1 good header around the 75-minute mark that could have been a goal but it was missed too.

The final minutes of the match didn't have much to offer. I was hoping to see Vinicius doing another one of his typical electric plays but that didn't happen either. I think he only touched the ball like 2 or 3 times.

Brazil was able to win the match thanks to their good first half when they completely dominated everything. The second half was more even, and if in final Brazil reduces their performance during the second in the same way, I think they are going to have a lot of trouble defeating Argentina.

The match was entertaining, Neymar did a lot of cool dribblings, but I was expecting to see more goals. I hope today's matches can satisfy my current goal thirst.

Wednesday's match is the second Euro semifinal between England and Denmark. The finals are both this weekend.

https://twitter.com/dedicatedguy/status/1412234955283906563
The rewards earned on this comment will go directly to the person sharing the post on Twitter as long as they are registered with @poshtoken.

Always an amazing match when Brazil is on the pitch, I will be watching.

Always an amazing match when Brazil is on the pitch