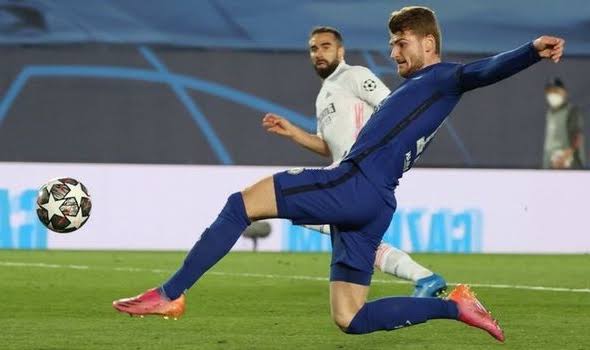 Sentiments aside, everyone knows that Chelsea should have torn Real Madrid apart in the first 20 minutes of the first half but then this wasn't the case. Before the match I made a statement on the official chelsea facebook page stating that Chelsea will only win if Timo Werner came to the party. It feels like Chelsea have sucessfully gotten all the ingredient to beat any team in the world except that they will lack a world class striker and this might be the reason while they might play well, get to big stages but never win any trophies.

I like to think Thomas Tuchel knows how to build a formidable squad, he did it with Dortmund and PSG but I feel he looses his ability to go out when it matters most and win trophies, his PSG team outplayed Bayern Munich in last season's champion's league and after matching Bayern for everything they lost they match for not being decisive enough.

Being Decisive When It Matters..

Everyone already knows that Chelsea is a great team, I mean Ngolo Kante single handedly kept Casemeiro and Modric in his back pocket for 90 minutes, this shows he's arguably the best defensive midfielder in the world, the Chelsea defence featuring Thiago Silva and Rudiger is currently one of the best in the world, Although Kovacic missed the game he's also a player that has established himself and staked a place in the team. But when you look at the Chelsea attack, it's exactly where the problem comes in.

This is where Tuchel hasn't established a claim, i mean you have Tammy Abraham, Olivier Giroud and Timo Werner. All three of them have their strength and flaws, as a manager, you need to decided what's more important to you, you need to read your games after every match and decipher what your team truly needs, at the moment it feels like Chelsea needs to score more goals and have a big game striker upfront. 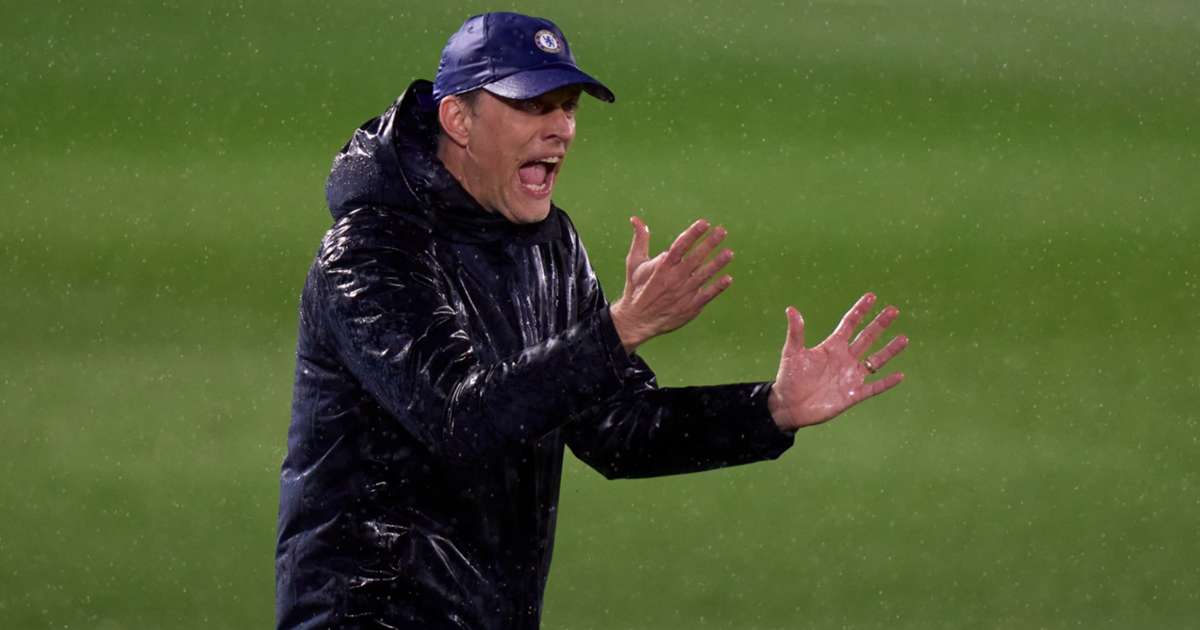 Olivier Giroud should be the man. I mean take a look at Tammy Abraham for all his clinical stats as a striker I agree with Tuchel that he hasn't got it in him to contribute to the system Chelsea currently plays, he's more of a player who is good with tap-ins, his scoring ability to me in a one-on-one situation for me is like 6/10, for a tall player he hardly utilizes his height, he's very poor with headers, lacks good positioning and like I mentioned earlier, he's not a player you can rely on in big games.

As for Werner, he's twice as poor as Abraham, I mean he's probably the most uncertain striker in the whole world, missing 29 opportunities out of 37 and only scoring 8 of them. We argue he's got work rate, he has the pace but lately I haven't seen him outpace any player, his ability to think as a striker is zero for me, his cannot dribble, take on a player or shoot from outside the 18-yard box, he's got no fear factor in him, yesterday night, the Madrid players were on Pulisic, leaving him alone to roam without making any impact because they know he poses no threat. Most Chelsea supporters have rooted for Werner, but the the German forward has always disappointed when it mattered the most and last night was probably the last straw. But then you can't help but notice playing him countlessly is a sentimental decision by his fellow countryman and manager, I mean let's not talk of the failure of kai Havertz and how he adds nothing to the team but still plays. (Probably because Chelsea has got no other player to replace him.)

Karim Benzema was limited to just half a chance, a set-piece opportunity which he acrobatically converted, it was basically the only slip up in the defence with the back four going for zonal marking rather than personally man marking Benzema. They limited Luka Modric to creating virtually nothing but then just half-a-chance and Benzema scores. Thats how you know a quality striker. A Diego Costa against that Madrid defence will score at least 3 goals and this is to show you how unclincal Timo Werner has been. An Alvaro Morata scored at least when he needed to, but then Timo Werner just about misses everything and he might just be the reason why Chelsea might lose out to Madrid in the second leg.

Chelsea has shown they want to win, I mean Madrid knew Chelsea ran them ragged and they're just so lucky Werner gave this game to them. All in all, the honey moon is over for Werner and it's time to bring in Giroud, dash any thoughts of playing Havertz as a false nine because he's not even good a creative midfielder and runs away from tackles. Tuchel needs to start Giroud, run Madrid ragged again and put be clinical. The whole team is already excellent and sincerly Tuchel has done so well in a short time.

Chelsea can win the UCL, but Tuchel must go for a clinical Giroud, it's not about loving Werner's work rate anymore, the Madrid defence don't need a speedy player running without aim at them, they need a presence that would put them under pressure and score from half chances. find a way to create a Chemistry with him and Ziyech and we know these two on a good day can be deadly and clinical.

DeFi In The Nigerian Space; Controlling Finances You Can Understand?

Comparing Asians & African Food; What Determines The Unique Eating Habits Of Most Nigerians?

The Stench Of Change (An Original Poetry)

tough match for real madrid. but bad luck for chelsea.

Well, bro, some of your sentiments I don't 100% agree with, but share an overall belief.

Werner is ass, and he singlehandedly made us draw that game. Too many chances went begging during the first 20 mins and I was afraid they'd come back to hunt us.

In the end, we need a more "present" striker. Giroud might just be the answer for Chelsea. Timo would have to sit the second leg out for me.

Well, bro, some of your sentiments I don't 100% agree with, but share an overall belief.

In reality, it's glaring and that's why I made the analysis, everyone can see Wener is done, I don't see him taking Chelsea anywhere, it's more of a fact because the stats basically proves it. Chelsea would Only play well, they won't win trophies with Werner leading the line. Thanks for dropping by

See, on the contrary, the stats actually proves werner has being superb.

But he misses more, a decent striker would have been the top scorer in the EPL by now, I mean put Diego Costa in Werner's places, he'll have gotten 30 goals by now.

I cant dispute that fact. He squanders more that 70% chances he gets.

Look at benzema's impact yesterday, that's what you call a striker,he literarily made sure Madrid didn't lose

Just one chance he had. 😬

I wouldn't disagree with you on your analysis, the first half was good enough for Chelsea to seal the win with 3 goals, the frequent chances not being utilized upfront was heartbreaking against a Madrid team that only needs half chance to punish you.

Chelsea do look like they advance to the final they just need to put on a similar show with a bit of tempo, finish the chances up front and we will be in the final.

Talk about Costa, Chelsea needs one of those strikers to torment opponent's defence!

I hope those chances don't haunt Chelsea in the second leg, I mean you don't miss chances against a club like Madrid, they will come at you and finish you off, we have Kante to thank for being a two-in-one player. Those creative midfielder of Madrid would have tormented us, but hopefully Tuchel can do the right thing, Werner is a disgrace I tell you, this would have been our year to win another UCL

We are still in the run for the final and with a slight edge, we just need to capitalize on it.

The match was good enough for chelsea at 1st which they should have seal their chance but the left it aside.. I just hope this chance won't hunt them in their second leg. Because the game is now very slim for them to qualify

The chances might just haunt them, Madrid will be happy and I feel its somehow too late even if its still 1-1. Against Madrid you don't miss you need to score even half chances to eliminate them

Exactly, madrid will tend to dominate then cus they have more powers over chelsea. And Chelsea don't know that

You nailed it bro
Werner cost Chelsea fc the match.
Chelsea really need a striker who scores goals for fun.

I was surprised to see Tuchel deciding not to use Giroud for this match. Was he injured or was it just a decision from the coach? Werner isn't a top goal scorer but he is very fast and is useful when doing high pressing.

Kante was the key player for Chelsea in my opinion, the guy is never tired and can help both in defense and in the attack. The second match would be entertaining, and I think Madrid will have both Mendy and Valverde available to play, which should be good for them.

Chelsea's chances are slim now, Tuchel feels Werner has got pace and Giroud hasn't, but then Giroud is a better finisher, even if Giroud plays second leg will chelsea have the same chances since some key players for Madrid will be returning? I feel Tuchel lost the game by letting Werner play in the first place When he knew he's got issues with confidence and in a big match as the Madrid game.

First I am a Madrid fan and all I can say is next week we shall see. You even said that kante held casemiro and modric in his back pocket.. Oh wow!!

I just hope you are ready to be disappointed next week.

I can't deny the fact that Chelsea have a thing for holding on to the ball and appearing as if they are cordinated but it's not about appearance.

Madrid is going to rip you guys apart. Get ready

I don't deny Madrid can beat chelsea, I even said due to Werner's wastefulness Madrid may have a chance but Madrid were lucky and should be very happy because with a good striker Chelsea could have buried Madrid and second leg wouldn't even matter, but then no buts" anymore, we're the architectures of what Madrid might do, the tie is now open anyone can win.

It could be another all English Champions League final, although there might be a bite in the tail of PSG yet.

As for Chelsea, Tuchel looks to have been an inspired appointment.

Hopefully they can win