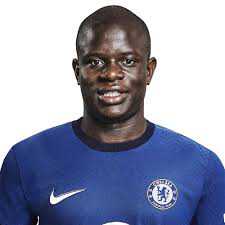 Who N'golo Kanté really is? If you are not his family member, you can't really know but as we see him outside could explain a little about him. He's a world class footballer

Kanté is the midfielder that I know which don't always commit foul, other midfielders that plays his role are fund of red card. He mark with sense, and it's hard for him not to gain the ball he tackle for

This Chelsea midfielder plays a very important role in the midfield so he can't escape yellow card at times but he is the type that don't complain. I never see him argue with refree or his fellow player and he cool minded

I can remember France won the World Cup, this French man didn't even want to snap picture with the cup until his team mates force him to. He have a very simple life that is rare for man to have

Kanté is able to mark, he's able give pass, strong enough to control the midfield and he do it with sense and recently he has added more to his skills; he can now hold ball and give final pass

For those of us who love sports and especially soccer, it is a pleasure to highlight the performance of great players like Kanté, his level of humility identifies the quality of person he is. I congratulate you for this post, I am fans of people like N'Golo Kanté.