What an amazing football game! Liverpool just hammered Norwich City 3-0. The goals were scored by Jota, Firmino and Moh Salah. Moh Salah was playing amazing, beside scoring one goal, he sent the assists for Jota and Firmino. Salah was absolutely the man of the match. I am really excited to watch the game on live broadcast, as Liverpool players playing wonderful under coach Jurgen Klopp. 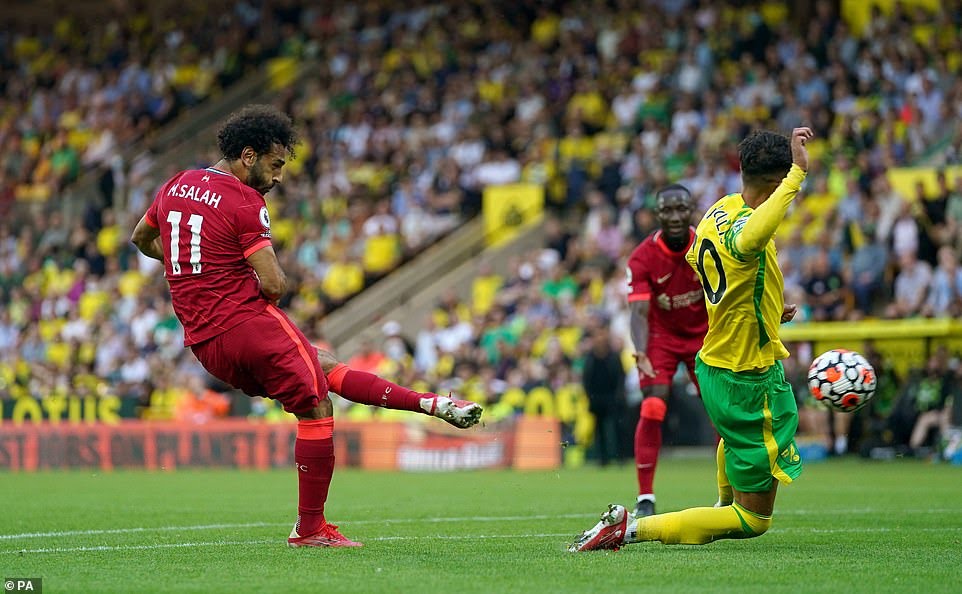 I hope The Reds could win the trophy of Premier League this season. They have great players in the team. I am pretty sure they would be able to compete with other big teams like Man City, Man United and Chelsea. However, I hope there would be no players with fatal injuries. As a Liverpool fan, I would love to watch Liverpool play like today for the rest of the season.

And you know a record today? It’s Mohammed Salah is the first ever player who score on 5 consecutive Premier League opening weekends He is extremely a greatest player in the history of Liverpool.

That's a nice improvement this season.If they continue with this number.i know they will carry the league this season because I know, last year, they were disturbed by covid.Nice step my guys

Covid has ruined many aspects of our life. Hopefully, covid could disappear soon

one can obviously see that truly they never walk alone with the outstanding performance we saw. i am sure if they can continue in this tempo they may end up winning something.

Sure. Pretty sure, I hope they win Premier League title this season

The EPL kick off with heat, nice to see Liverpool back on the field

Great performance from the red side who has most of their key 🗝️ players back in the team and what a way to resume the new season with a win against the strong crystal palace squad.

Yeah, it’s a great start by Liverpool. We are gonna see their performance in the next matches.. :)

Great way to resume the league from Liverpool with a 3-0 defeat against Norwich. Nice to see the defence solid as ever with Van Djik back to the team. I hope they keep this form throughout the end of the season. Also saw that one from salah. Really impressive record, he always have a way to get on the scoresheet on the very first day of every league action.

Since Van Dijk is coming back, Liverpool’s defence would be solid :)

It was really a nice game played by Liverpool..
Their start was encouraging and jota is on fire, the guy is really good..
I just wish they won't mess up how they did last season..

Salah is the outstanding player for Liverpool. We hope he may win golden booth again this season..

Liverpool displayed a very great performance today, by winning Norwich three goals to nothing, it was a brilliant performance by jota Salah and firmino, in fact the entire teams play the wonderful ball today they called the nation the accurate passes and the assists was so perfect I think Liverpool is going to find their feedback from their poor performance last season ,it's a wonderful performance today

They are really great players. Liverpool are so lucky to have them in the team

It's no surprise that Liverpool is at it again being in the top flight of English season. Covid 19 was an obstacle last season but I'm sure they would stun us yet again.
Congratulations Liverpool!

I am sure, Liverpool will be on the top of table this season

They will be for sure!

Thank you so much for always being there for me!