Argentine would be the first National Team to launch fan token, named $ARG. This is really great to know that cryptocurrency is widely accepted day by day. $ARG would be a national token for Argentine Football Team. All fan could own the token and use it to vote on the team on socios.com. 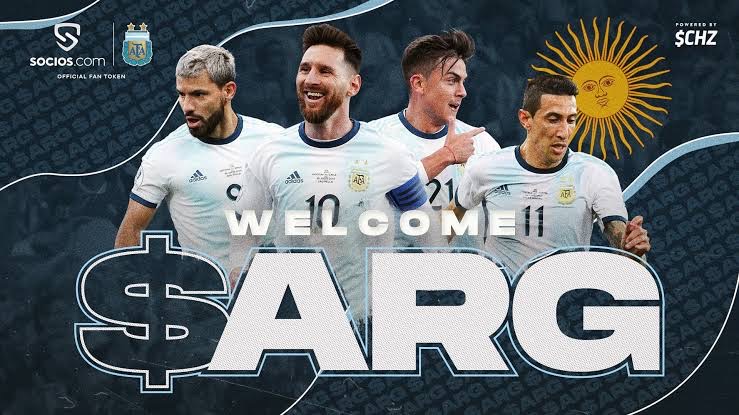 As a football fan, I am so glad to know that in this year, we start to have more and more fan tokens. I have already collected some fan tokens like $JUV, $PSG, $BAR. Apart from supporting Liverpool, I also a fan of Juventus, so I am excited to hold $JUV token. This token is available on Binance.

We have to thank to Chiliz and Socios.com that have created fan tokens for us Sports fan. I believe, there will be launched more and more fan tokens in the future, when cryptocurrency mass adopted. I hope more national football team will also have their tokens, like England, Germany, Italy, Spain, etc. Even, my country Indonesia.

All current Argentinean users on Socios.com will receive one $ARG Fan Token for free. This only applies to existing registered users on the Socios.com app.Source

When $ARG is available on the market, I am going to collect some token. I am sure the token will be trending upon launching.

This is going to be a very good addition or I should say development to the world of football and sports at large.iy is a very good and welcome step towards improving sport

Wow I'm just hearing $ARG the first time in the crypto market.
I will say this is a positive move for Argentina to build the moral of football in fans and the youth.
I'm so gonna gains from this $ARG I can't wait for it to drop.