Will England Finish EURO2000 Without Conceding Even Once?

England have been doing a big run in Euro2000 with 5 clean sheets already when playing against all of Group D teams: Croatia, Scotland, and Czech Republic. Then they beaten Germany at round 16 and hammered Ukraine 4-0 in quarter-final at Studio Olimpico, Roma. So, will England keep being clean sheet until the last game of Euro2020? Yeah, England the winner! 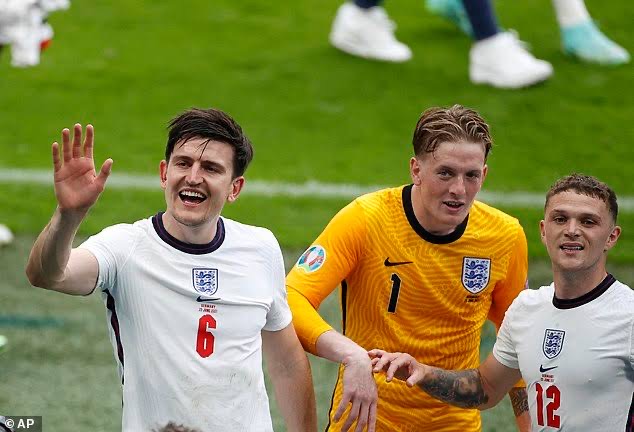 I predict England will face Italy in Final, and The Three Lions would win 2-0 over Italy. To make the record of 7 clean sheets in Euro Championship final round. If that happen, so none would break that record. England own great goalkeeper, Jordan Pickford.

And you know, England defenders are the players of Duo Manchester. The pair of Man City defender John Stones and Kyle Walker, alongside duo Man United: Harry Maguire and Luke Shaw. What a perfect players that Southgate have in the team.

I hope England will really finish EURO2020 without conceding even once goal, and lift the trophy of Euro2020. England players are so great recently and the Premier League is the best league in the world where well-known managers working there like Pep Guardiola, Jose Mourinho, Thomas Tuchel, Jurgen Klopp, and many more.

The quality of the league and managers has influence so much the quality of England Players. And as we known already that all England teams final in the Champions League 2017-2018 and 2020-2021. So, according the analysis, England is the most favorite team to win Euro2020.

The defenders have really tried. They have both been play at their best. Hopefully the can continue to keep the clean sheet

Yes. I hope so, as I am a fan of Premier League. That’s why I support England win Euro, and World Cup as well.. :)

Same here,am a Manchester united fan,but have created so much love for the dans since their first match against Finland maybe it was due to Eriksen case,but I will love them to do a licesteer city too in this euro2020

We hope at least England may win Euro

They have just been lucky with blunt finishers in opposition team

Yeah, England got 5 clean sheets in Euro. I think the final game would be so fun :)

I think they will have to concede a goal. If not in the semi final then in the finals has their defense is not immune to goals no matter how good it currently looks like. About them meeting Italy in the final, I also expect that to happen but not the result :-)

Could be. But, 5 clean sheet in Euro already is a great thing. It’s the first record in history. It’s unbelievable, isn’t?
Yeah, it will be the big match in final with England vs Italy. :)

That is a very good prediction from you,you are seeing the Azzurri's in the final with England,but will should not write Spain off, despite the fact that the have not be that convincing,but anything can happen

@pthker2010. Yeah, that’s true. Italy vs Spain is another big match. Spain have the same possibility to proceed to final game

Could be. But, 5 clean sheet in Euro already is a great thing. It’s the first record in history. It’s unbelievable, isn’t?

Yeah. Truly impressive. I must commend them for that. Didn't expect them to go this far without conceding.

Yeah, it will be the big match in final with England vs Italy. :)

I believe that's the match many people would love to see.

They will still concede hopefully against the danish side,but nothing should be taken away from this pair of defender's they have been very expectional since Maguire came back from injury

Yeah, they concede 1 goal.. but they won 2-1 over Denmark

They can if them continue with their team work .
I'm which they have got a record for the first time in their history
And also remember that all their defender are now wicked so anything can happen. This is football always tactical

They are already in final. I hope England win Euro 2020

Mate! That's the same question I ask myself but in the game of football it depends on the strength and the weakness of both two of them and the lucky one will go with the trophy as they plans

Such an extraordinary run they are on ! They deserve respect for that.
Funny how the world (and even more GB people) have been mocking GB goalkeepers for years, they finally got a good one ;)

I also see Italy - England in final and if they didn't concede any goal in semi-final then they will during the final :D

I dont believe the word England is the most favorite team to win Euro2020. Italian are very tough most especially there defence. I like your prediction that they will play the final if at all they can work harder

It happened now. England vs Italy :)

My prediction is already happening, England vs Italy :)

my dear friend, it is possible for England to win the match with clean sheet, but i can still recall what happens to Nigeria under 17 on world cup years back, they played unbeaten from start till when they played their last leg, the loose and the victory wasn't theirs again. many people loose money because they staked them to win. i pray that of England won't be that way because they deserve the best this season. they have tried.

@anicom. Yes that’s so true. I just hope England could win Euro2020 this year. It’s a perfect time for them to win it

Pickford and the rest of the England defence team have been amazing in this competition, they did there job well.

Yeah, they are almost perfect. It’s only one goal conceded. And now they play in final

That isnot possible and they conceded against Demark tonight

Yeah, finally. However, England proceed to the Final