My thoughts on Ollie Robinson's racist and sexist tweets 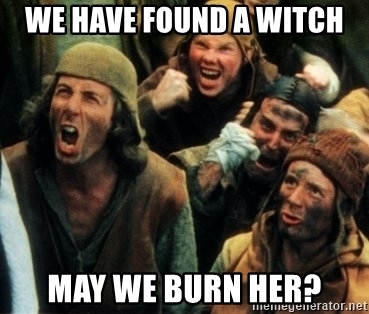 The storm surrounding the England cricket team at the moment which started at the end of last week when historic racist and sexist tweets by debutant Ollie Robinson were published reminds me very much of the witch scene from Monty Python and the Holy Grail.

The tweets below were written by Robinson 9 years ago and as you can see are certainly in poor taste. How do you know he's a racist? Well, he made an inappropriate joke on Twitter 9 years ago and he turned me into a newt...

Robinson made a full apology via a news conference and personally to his teammates at the end of the 1st day's play in the 1st Test against New Zealand but following the conclusion of the game has now been suspended indefinitely pending an investigation into his conduct.

I don't think anyone could argue that Ollie Robinson's tweets are appropriate but is banning him from playing cricket and earning a living a proportional response given that these tweets were published when he was a teenager? I'd suggest not!

Working in Higher Education as I do, I see plenty of 18 and 19 years doing and saying ridiculous things for which they ultimately have to bear some consequence. At the same time, short of repeat offences or crimes of the most serious nature, we (The University) stop short of kicking them off their courses or taking any other action that may impact their future lives and careers because we have a duty of care to look after those young people and educate them. Are the ECB doing the same with young athletes under their care? I'd suggest not

If anything, I'd say the ECB are doing a pretty good job of stoking the fire in a bid to cover their own backs. After all, this is certainly taking the heat off them in regards to allegations from former black umpires that the ECB is essentially a racist organisation or indeed the accusations of similar institutional racism at Yorkshire CCC by a former player. And let's not forget that the MCC, the guardians of the laws of cricket and "the spirit of the game" didn't even allow women in the same room as them until 1998!

This is the kind of institutional discrimination that should be under the spotlight far more than the historical actions of young players who after all are only a product of the environment that these organisations and society at large have created.

The fight against racism shouldn't be directed by the "outrage industry" as Sir Salman Rusdie (a man who knows more about how perceived offensive language can get you into hot water than most) put it in his description of the way that social media storms tend to occur around such events. Instead of banning Ollie Robinson, silencing him and throwing him to the wolves, education and discussion should be at the forefront of his (and any other young cricketer's) rehabilitation.

"the strongest weapon against hateful speech is not repression, it is more speech!"

I don't personally believe that the kind of mob mentality that exists on social media these days has much interest in a frank discussion. Instead, they are much keener to just burn the witch!

I agree. We do dumb things as a kid and holding responsible for their immature remarks is even dumber.

I noticed tonight more players have been suspended which is not the right way to handle this.

There are some tweets where Jos Buttler and Eoin Morgan appear to be mocking the Indian accent/style of speech and another tweet from 10 years ago where James Anderson refers to Stuart Broad as looking like a 15-year-old lesbian.

I don't think that anyone else has been suspended yet and there is even talk of "amnesty" for players who come forward to confess their previous sins (whatever twitter may judge those to be). Usually, we'd use the term amnesty when people are handing in guns and knives to the police, you know things that might actually do you damage, not some throw-away comment from over a decade ago.