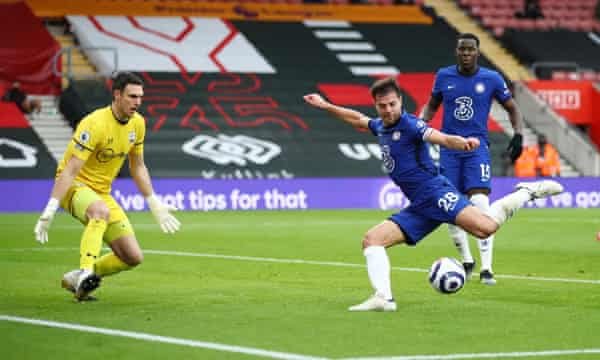 Peep peep came the whistle at the St. Mary's Stadium Southampton ended their losing run with an admirable defensive performance, symbolised by the impressive debutant from Mohammed Salisu. Chelsea dominated possession but were nowhere near the best.
Source
Takumi Minamino gave Southampton a half-time lead with a delicious bit of deception in the 34' of play. Mason Mount earned and then scored a penalty early in the second half, but Southampton on the other hand held on to a point relatively comfortably .
In the course of the match they would have grabbed two more points when Southampton defender Jannik Vestergaard's header went straight at goal but only succeeded to hit the bar. Fun though but a bit frustrating it was for the Blues as they dominated plenty of the ball but lacked a cutting edge in the final third, with far too many wayward passes in attacking positions.
Source
Manager Tuchel had made a couple of changes to his starting eleven for the game in those times we saw N'Golo Kante and Kurt Zouma both making appearances for the first time since the last time when he replaced Frank Lampard,
Still in the substitution list ; we witnessed as Edouard Mendy also returned in goal to replace Kepa, who had kept a clean sheet against Newcastle.

Mason Mount earned and then scored a penalty to earn Chelsea a point after Takumi Minamino’s delicious finish that gave Southampton the lead.
Chelsea draw 1-1 at Southampton thanks to Mason Mount's ; who is on-loan, Its pertinent to remember when Liverpool forwarded Takumi Minamino to the host. His worth was rated today when he gave the hosts a first-half lead; Chelsea remains fourth in the Premier League.
Source
The match was brought to an end in 90+7'. Ralph Hasenhuttl's team, meanwhile, stay 13th in the table after picking up their first point since beating Liverpool at home at the start of January.