Is Maguire a team leader or title holder?

A Leader can be defined as a perso who has the capacity to take care of subjects that are under his care. A leader us a person who has authority and has the capacity to influence the people under him to obedience. A leader could also be considered to be a person who stands against the storm in a bid to defending the rights of the people he is leading.

It is on this presupposition that I wish to draw the attention of sport lovers and Manchester united fans round the globe to please tell air their opinion about the captain position handled by Maguire during the 1:6 loss of Manchester United to Tottenham on a Sunday evening.

Often time, lot of people do mistake leadership to being at the fore front or being a figure head. This however is erroneous and misleading because a leader should be a person that takes charge and not someone who shys away from responsibility and fails to defend his subject when such need arrives.

Maguire was gotten from Leceister on the tune of 80million ponds to come and help the defense line of Manchester which was very weak last season especially when Bailey was out because of the injury he suffered during training.

to on the seascape feeling of annoyance, displeasure, or antagonism. Anger is a natural emotion that comes as a result of the wrongdoing of someone.

In every team, there must be a captain and in the Manchester United team, Maguire happens to be the one thst has being saddle with that responsibility. Since his arrival to the Theater of Dreams, there's being an uncertainty about the choice to buy him because he has been making one defensive error or the other in almost all the 22 matches that he has played. How about the own goals? This has indeed made the coach consider taking the captain title from the goalkeeper David De Gee to Maguire so as to bust his confidence but that hasn't helped as he further exposed his flaws during the Sunday loss to the visitors from White Hot Lane, Tottenham. 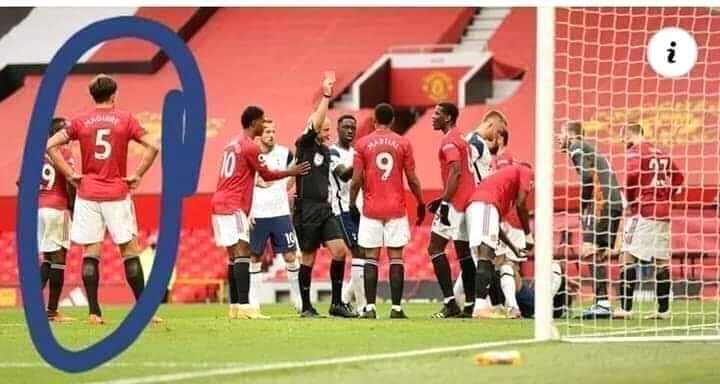 Nowlook at the picture closely again and see the reaction of Manchester United players after Anthoney Martial was shown a Red card for slapping Lamela. Paul Pogba even did a gesture at the referee something that if interpreted should mean "are you crazy? " but Maguire, the team leader did nothing.