uyobong in LeoFinance • 6 months ago

Hive is never short of creativity and innovations. The blockchain infrastructure allows any entrepreneur to build his dreams and take advantage od the scalability, true decentralization, fast and free transaction features of this blockchain. It's never wrong to call Hive The People's Bitcoin. At $0.3, Hive is still very affordable for anyone who wants to be listed among billionaires in the next 2 years.

I've met two awesome persons @ph1102 and @achim03 who are active leaders in the CTP community and are working hard with @Jongolson to bring value to the Hive blockchain. After spending about 3 years each oin Hive, Achim and Ph1102 decided to build and launch in a new product on Hive-engine, the second layer of Hive blockchain. hence, Project @Liotes.

Liotes may look like a dividend paying token which pioneers to transform this air circulation into energy. The Liotes Energy mills (LENM) that will produce an almost never ending supply of energy (Liotes Energy = LEN). Launch is scheduled for March 9, 2021.

in today's Liotes update, it was interesting to see a Tribe power renting feature which would be the first on Hive second layer that would serve as one of the usecases for LEN tokens while also helping to boost the value of other tribes token which would be considered in the lending pool. Liotes promises to be a project that would benefit everyone. IO'm already bullish about it. Read this paragraph that inspired me quick reach to 70 million SPORTS stake

Renting Tribe Power is one of the priorities that we will try to implement in the short term. As the idea is to create USE CASE for our LEN tokens, we want to make that happen and we believe that this can be the first step toward that. We couldn't do this before, as we didn't distribute tokens (yet). So, for the beginning, you can expect a kind of store on our main website where you will be able to spend your mined LEN tokens for purchasing renting power in your favorite Hive-Engine tokens (LEO, CTP, SPORTS, etc...)

On reading that paragraph, I hurried to power up 600k SPORTS (about $62 in value) and that helps scale my SPORTS power to around 70 million. Here's my transaction ID. I've been clamouring for partnership on Hive and blockchain and nwe see the many dividend tokens like BRO, DEGHE, and others making that possible and allowing investors to earn other tribes token.

Each day breaking brings us closer to the beautiful future of SPORTS token and I am not resting until 200 million SPORTS stake is reached. The journey to my SPORTS power all started from a Zero cash investment. Contents were created and SPORTS were earned. I powered up and also uised my HIVE earnings to buy more SPORTS. Over time, the valueso accumulated has steadily rose through to this epic 70m mark. 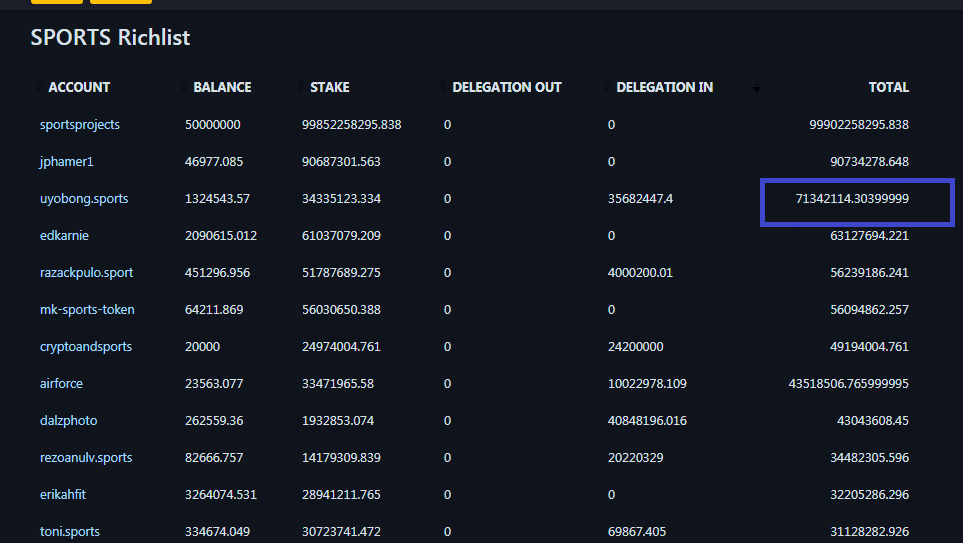 I think we are getting closer to the future than ever. Imagine that we have some 10 huge investors desire to power up 100 million SPORTS and curate with it, then we could see a SPORTS token worth $1 or more. This was just a quick perk on Liotes and its plan to build other tribes. I'll be right back to tell more on why you should get ready to invest in LENM.

I'm hearing this tribe for the first time but it's use case of renting tribes power sounds so good.

Finally, I can rent 1million leo power one day and get profit from it.

Read more about @Liotes in their blog. It's not a tribe, but a dividend paying project. I would classify it into the CTP tribe.

Thanks for the mention of the Liotes project and happy to see that it inspired you to build your SPORTS token stake even more... I think that the renting delegation tool will have a great impact not just on our LEN token, but also on all other tokens that will be used in the store, and later in the market... More staked tokens, better price of the token, and more choice for people who want to curate there!

This is the reason I am supporting Liotes. It looks out for collaboration and the growth of other tribes.

This is something different. So you mean we can lend the sportspower to earn dividends now?

Ofcourse, that's what the Liotes project promises. Let's see how it rolls out.

Thanks. 70 million SPORTS is just the starting point. I look into the future and that patiently.

Thanks a lot for this amazing post! We greatly appreciate the shout out for our project :-).