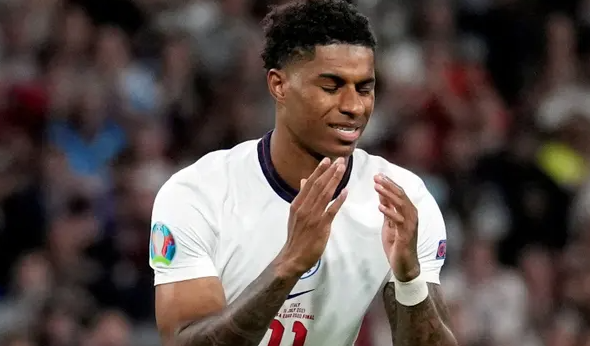 After fail scoring for penalty shoutout in EURO 2020 for England , Marcus Rashford has been become victim of racisms with his 2 team mate Jadon Sancho and Bukayo Saka . His mural in Rashford in Withington , Manchester was also been defaced but not with hatred message but with word of support and solidarity at the mural.

Rashford has been apologized for missing the penalty shoot but he say he not apologized on who he are . Meanwhile , we will not see Rashford play for Manchester United until October because he has decide to do surgery on his shoulder later in July. He cpuld be back training within five week of surgery but he might back on his track later in October.

I dont see reason why England fans should be angry again all they need to do is to leave the past and focus on what lies ahead of them.

I wish Rashford a quick recovery from his injury.

i 100% agree with you. It was a game , even a legend sometimes miss their shoot

With this injury given him worries, it's best it's taken care off once and for all. Wish him a successful surgery.

Concerning the criticism for the penalty miss at the European championship final, they should rather encourage him. Anything can go run in Penalty shootout.

ikr . he has dealing that injury for long time . I hope he can play 100% fit after recover from the surgery.

I believe not everyone critic him , but the racism is gone too far until all the social media delete the racism comment.

Yeah. If the surgery goes successful and with enough rest, he should be back to his physical best.

The racist attacks has been really bad. Hope the football authorities fish out the attackers and ban from football related activities.

Definitely I didn't expect him to receive a huge abuse like this,but on the other way round fans are just being passionate about their country,but of all he deserves to be shown some love too and wishing him quick recovery in his shoulder injury as he will be missed at the theatre of dream when the season starts fully

What a pathetic sorry about the English man. I hioe he well soon. Also he has really done well by appologizing to the fans for the penalty that he missed.

He has a humble heart , not every player apologizing if this was happen

How unfortunate for Rashford that he has to pay for being a person of color, it is very sad to see and know that this kind of thing happens to people like this.

I hope that Rashford comes out of his operation well and that he recovers as soon as possible so that we can see him active on the field again.

I thought racist period has over , but there still people thinking that way until now. Why ? huhu.. so sad to know things like this still happen now.

The racist period is something that should never have existed, it's something very stupid, because you don't choose to come out of color. I didn't come out colored but the sun made me that way and I feel like a person of color and I like to hang out with people of color, I don't know what the problem is with them.