France defeats Germany with an own goal by Hummels! [ENG + ESP] 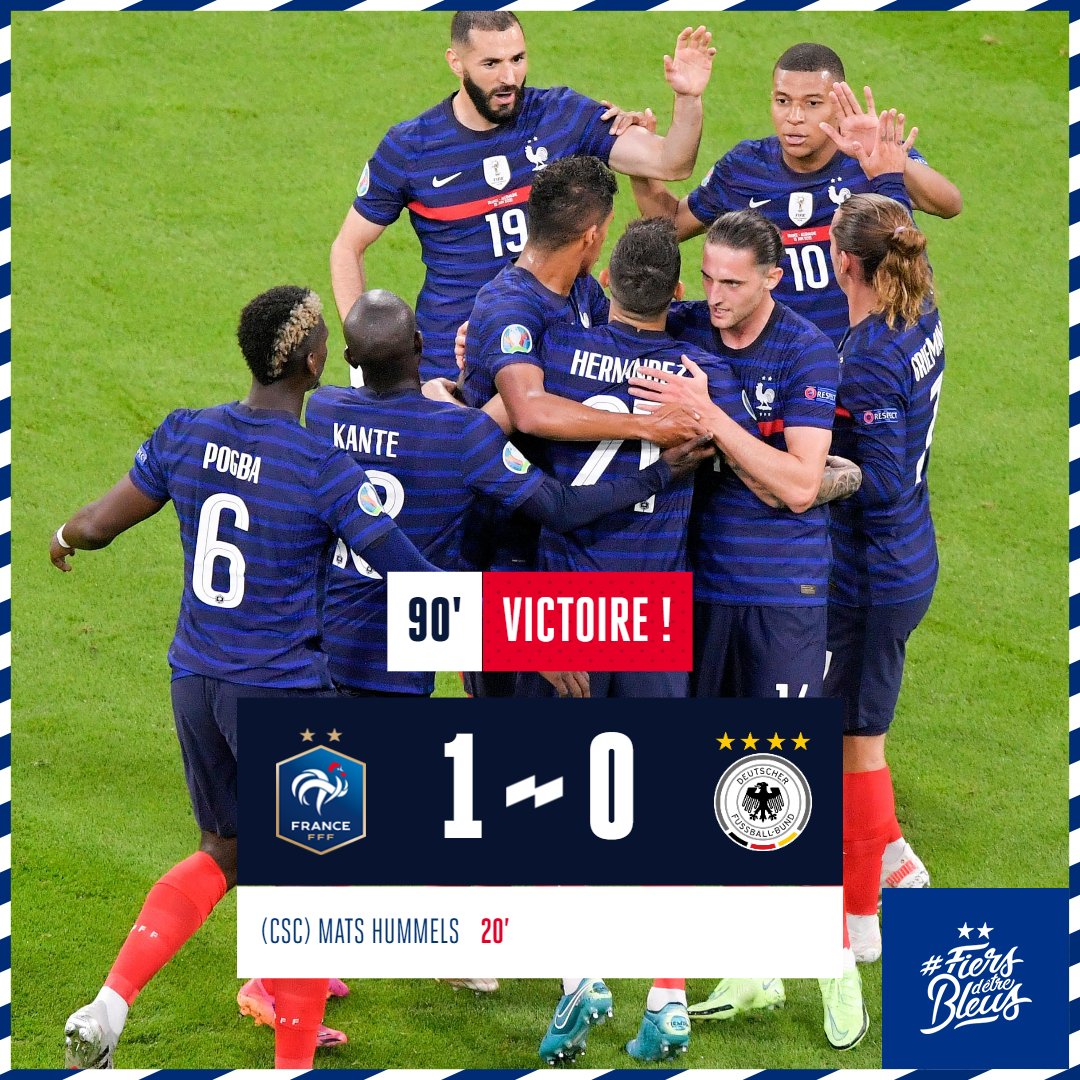 This was the first match I watched of the UEFA Euro and I was quite excited about it because both teams can be considered as candidates to win the tournament, and personally, I believe France is the number 1 favorite right now. I haven't watched much football lately but I do have the matches between Germany, France and Portugal marked in the calendar. I am surprised these 3 teams share the same group.

Both teams have great players in every part of the pitch, great goalkeepers, defenders, midfielders, and attackers. if it was possible it wouldn't be entirely surprising to see these 2 teams on the final, or at least in the semifinals.

One important thing to mention about this group is that it has the last 2 World Cup winners, France and Germany, and the last UEFA Euro winner, Portugal. It is without doubt the best group in the current UEFA Euro.

Germany controlled the ball since the beginning of the match. This team has players that feel comfortable keeping the ball to themselves such as Kroos, Gundodan, and Muller. They used their ball possession to try and create good attacking plays but this turned out to be extremely difficult to do, especially when it was time to finish the plays with a good shot.

Germany felt comfortable with the ball and France felt comfortable without the ball. It seemed as if both teams were playing according to their plans. The match was very even since the beginning and it was hard to guess which one had more chances of winning. I didn't expect such a dominant Germany to be honest.

France has a very good defense and Mbappe is great at counter-attacking thanks to his speed. France is also a more physical team so when it is time to do some high-effort moves during a few minutes, they can temporarily impose themselves over the German players.

There were no important shots in the first 10 minutes which proves both teams were a bit cautious in the beginning. Suffering an early goal is one of the worst things that can happen to a team during a difficult match.

Both teams had good pass attempts but they were always stopped by the last line of the defense. Most shots were headers or a couple of free-kick from Kroos. Kante and Pogba were the players with the best performance since the beginning, with Mbappe being the most important and dangerous attacking player.

The first goal happened after a wonderful pass from Pogba to the French left-back Hernandez, he then makes a half-shot half-pass and Hummels sends it inside the net when trying to send the ball out of the pitch. A good play from France and tough luck for the German defender. The pass from Pogba was beautiful and world-class.

Benzema and Griezmann didn't do much in the first half. Benzema's creativity was absent during the first half, and Griezmann made it clear his performance isn't the same as in years before. He still has a nice touch with the ball thanks to his refined technique but his overall impact in France's plays has been reduced by a lot.

Pogba on the other hand was very active everywhere on the pitch. For me, he was the best player in the match. His passes were key to initiate good attacking plays, and his prowess allowed France to resist Germany's dominance. His movements allowed France to move the ball from their penalty box to Germany's side of the pitch.

Germany was the better team in the first half, but their attacking players weren't very effective. They controlled the ball but were unable to cause much danger to France. It was obvious Germany was playing without a proper striker. Their attacking players were Muller, Gnabry, and Havertz and neither of them is a striker. With a proper striker, I believe Germany could have won the match.

During the second half, one of the best chances to score a goal was from Rabiot. In the 51 minute mark, he receives a great pass from Mbappe that leaves him with a lot of open space in front of him allowing him to run directly towards the goalkeeper. He could have passed the ball to Griezmann for what could have been an easy goal but decides to shoot instead and by that point, a defender was very near him so the shot wasn't perfect. It hit the post and was the best missed chance for France up to that point.

Around 2 minutes later, Germany reacts and Gnabry receives a ball from the left side of the pitch inside the penalty box, he does a good shot but it went above the post by mere centimeters. That was the best chance for Germany up to that point.

The match was getting much more intense compared to the first half. Germany was getting worried because they were losing and France was doing fast attacking plays taking advantage of Mbappe's speed. Benzema had a disappointing performance, he didn't have much impact in France's attacking plays, and there were only a couple of plays where he did something positive.

Griezmann participated a lot helping in the defense as if he was a defensive midfielder. I guess France wanted to protect the 1 goal advantage and Mbappe and Benzema are usually dangerous enough when attacking so Griezmann sacrificed himself helping his defensive teammates stop Germany.

France scored 2 more goals in the second half, 1 scored by Mbappe and the other one by Benzema but both of those goals weren't valid due to offside positions. Germany had more possession and more shots, but France's players were much more effective when finishing their attacking plays. France not only won the match but they even deserved to score at least 1 more goal.

Given how competitive this group is, Germany's defeat leaves them in a tough spot. They would have to win their next match against Portugal if they want to have good chances of qualifying for the next round, and that match isn't going to be easy. What's worse for them is that their lack of a goal scorer cannot be solved. They had Werner on the bench and he entered the pitch as a substitute in the second half, but he isn't a top goal scorer either. I believe Germany will continue to suffer a lot of frustration for their lack of goal-scoring skills.

I considered France as the favorite before the tournament started, but this match showed me that France isn't as dominant as I expected. They won by mere chance because the goal was just an unlucky touch from Hummels. However, it is also true that Germany has terrific midfielders which can make it harder for the other team to generate enough attacking plays. France's dangerous moves were mostly thanks to Mbappe's skills and speed.

I still think France is the favorite to win this tournament but maybe they aren't as dominant as they were in the World Cup of 2018. For the time being, France survived their first challenging match and this will be of huge help for their emotional stability in the days to come.

When it comes to the best individual performance, as I mentioned before, I believe Pogba was the best of the match, with Kante and Mbappe in very close second and third position. i expect to see Benzema with an improved performance in the next match, and it might not be a bad idea to give minutes to other great players such as Giroud and Coman. Dembele participated in the match but only for around 4 or 5 minutes. Since France's next match is against the weakest team in the group, Hungary, it might be a good opportunity to do some rotations.

The next match I plan to watch is this Saturday, Germany vs Portugal. Portugal won their first match against Hungary 3-0 but they scored all 3 goals in the last 10 minutes of the match. Germany will need to urgently defeat Portugal, otherwise, their chances of continuing in the tournament are going to be very small even if they defeat Hungary in their third match.

Portugal has a lot of talent and CR7 is still scoring goals as always, so this is a very competitive team. Let's also remember Portugal is the last champions of the UEFA Euro after they defeated France in that great final in 2016. I believe Portugal has good chances of reaching the finals or semifinals but I am not sure they can defeat France, which is the match I am actually more excited about. The match between Portugal and France will take place next Wednesday.

Let me know which team do you think is the favorite to win this tournament.

Aside that it was an own goal,the french national team was up to the task as they pressurized the German team and were very unlucky not to have double their lead in the second half.

The next challenging match for France would be against Portugal and that would be a great duel between CR7 and Mbappe. Italy achieved 2 great results in their first 2 matches, so maybe this is a team that could defeat France in the next rounds, for now, I still think France is the favorite.

If the own goal did not happen, it would have been decided in a shootout. Who do you think would win in a penalty shootout?

There wouldn't be a penalty shootout because this is the group stage and if they tie they would receive 1 point each. Penalty shootouts begin in the round of 16 if there is a tie because only 1 team can continue to the next round and there needs to be a winner. Having said that, I believe Germany would win a penalty shootout against France, they have a better goalkeeper and their mentality is more serene and stable.

this is the group stage

their mentality is more serene and stable.

Does this mean that Germany is more experienced (veteran) team than France?

Does this mean that Germany is more experienced (veteran) team than France?

Nope, but I think the German's mentality as a whole, is more serene than the French, and the same applies to the players. To give some specific examples, I think Kroos and Muller are more likely to score a penalty goal than Pogba and Mbappe. I also think Neuer is more likely to stop a penalty compared to Lloris.

But in penalties anything can happen though.

Aside the manner in which the goal was scored, the French held it well against the Germans. I see them going all the way to finals with such balanced squad.

Would love to see how they fare against the Portuguese. On this is for sure, that contest will surely be an exciting one