@chessbrotherspro 63
about 2 months ago (Edited)
Aliento

A new participation record was reached this Sunday in the Chess Brothers League! With 40 contenders the 6th round took place, and what a way to start the last third of the league! We are very pleased with the large number of players. We extend our most sincere words of gratitude to the entire chess community that little by little has been integrating this activity and that today we see materialized all the effort and dedication present in each round, in each game, in each move.

In this opportunity we played a 7 round Swiss tournament with blitz mode 3+2, format and time control that were chosen in the weekly poll carried out via Dpoll.

If you haven't heard about this league yet, check out the following post. The following image shows the podium and final standings of round 6:

Let's talk a little about the results of this round:

The most remarkable thing to notice is the figure of 40 registered players, which we hope to maintain and surpass in future events. @Tungphong (blackswan21 on Lichess) ratifies his presence as the current league leader. The solid score of 6.5/7 allowed him to be crowned once again undefeated. Undoubtedly, this result ensures him a comfortable lead in the leaderboard, because as we will analyze shortly, he has created a wide gap with his immediate challenger.

In second position is @tony1294, who had quite an interesting tournament. He won 5.5 units, a result that allows him to enjoy the runner-up position alone. @Samostically, meanwhile, remains in the top 3. With 5 points, he takes the bronze and maintains his hopes of moving up in the final standings.

Let's take a closer look at the tournament statistics:

With an average rating of 1930, the 6th round could be categorized in terms of strength as fairly even, especially among the first places. We see that except for @Tungphong, the rest of the players in the top 10 have a fairly even level, this then highlights the competitiveness that has characterized the league throughout its development.

In terms of effectiveness, white dominated in 40% of the games, while black scored in 34%, and there was a modest 2% of draws, which shows how close the games were, very few of which ended in draws. The remaining percentage consisted of absences.

To see the results and the games in detail you can check the following link.

Let's take a look at the season leaderboard:

As you can see, the first five places do not present variations of position with respect to the table of the previous report. The notable variations in the top-10 are the rise of @vjap55 to 5th place and @fjcr to 8th, both climbing one position, displacing @lucianosky (who was absent this time) and @rosmarly.

Also noteworthy is the rise of player JMPC81 (whose Hive username we don't know) to 11th place, climbing 6 steps after participating in only 3 rounds. We also note the rise of @maciejficek, who thanks to a decent performance now has a favorable tiebreak that allows him to climb positions.

In terms of points and with only two rounds left in the season, @tungphong has accumulated 74 valuable points, 20 more than @eniolw who is in 2nd place with 54 points. In other words, the top player is almost assured of top honors as the points gap is very difficult to break in this final stage of the championship. However, we will keep watching closely, because as you know, anything can happen.

For their part, the other positions are more open to variations: @tony1294 very close with 51 points lies in wait and remains with tangible options. Likewise @samostically who with his 49 units is still in the race.

You can study in detail the ups and downs in this leaderboard. We would also like to recognize the players who have had the chance to be 100% consistent, namely: @tungphong, @tony1294, @samostically, @rosmarly, @stayoutoftherz, @pereu4uwatch, @agreste and @rodrook. let's keep it up!

Now, we must make a ⚠️ warning: ⚠️ If you are participating in the league and you have a Hive account, but your Hive user does not appear in the table above, this means that we do not know it. Remember that according to the conditions stated in the announcement post, the prizes will only apply to those players who have a Hive account.

Also, if you are a new user who is participating in the tournament as part of the initiative Checkmate Boredom on Hive organized in collaboration with the @Aliento Project, then feel free to leave us your username and post in the comments section.

Now let's take a look at the games, let's talk about...

The draws that never happened

In blitz games it is a bit difficult to play with precision and even more so when the clock is not on your side. However, as part of the learning process, we have selected two positions in which white pieces could have achieved a draw in super complicated moments. 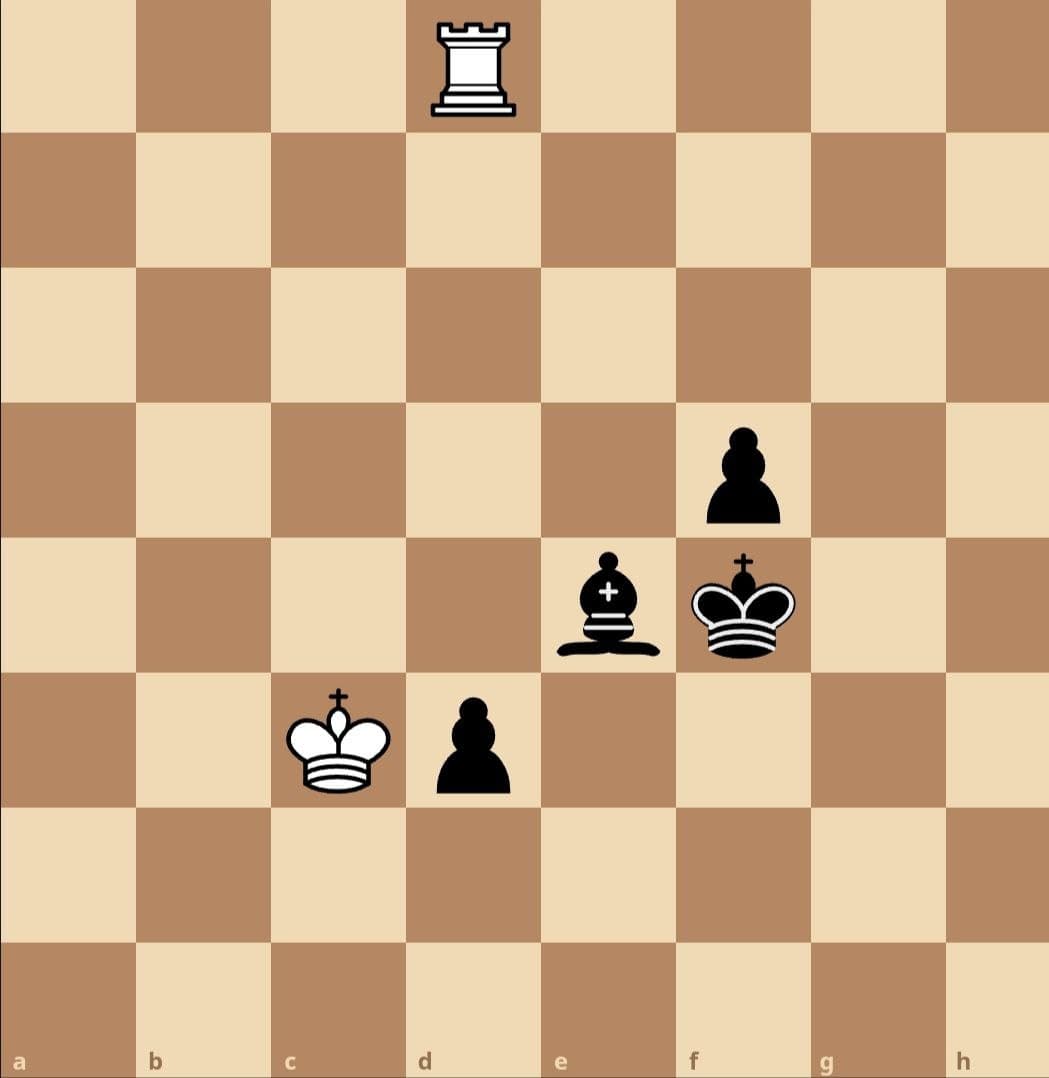 Position 1 (from the game @samostically vs @blackswan21)

@Samostically got a lot of advantage in the opening and played an excellent game. However, @tungphong is not an easy nut to crack. With a big flurry, the game has reached this point. Under normal conditions one could say that black has more than enough advantage to win, as the pawns are getting there and the white rook is not skilled enough to slow them down.... Or so it seems.

On move 62 white collapses, but there was a last resource that could have saved the game. Of course, it was super hard to see, so we invite you to solve this problem: White plays and draws (the solution is below). 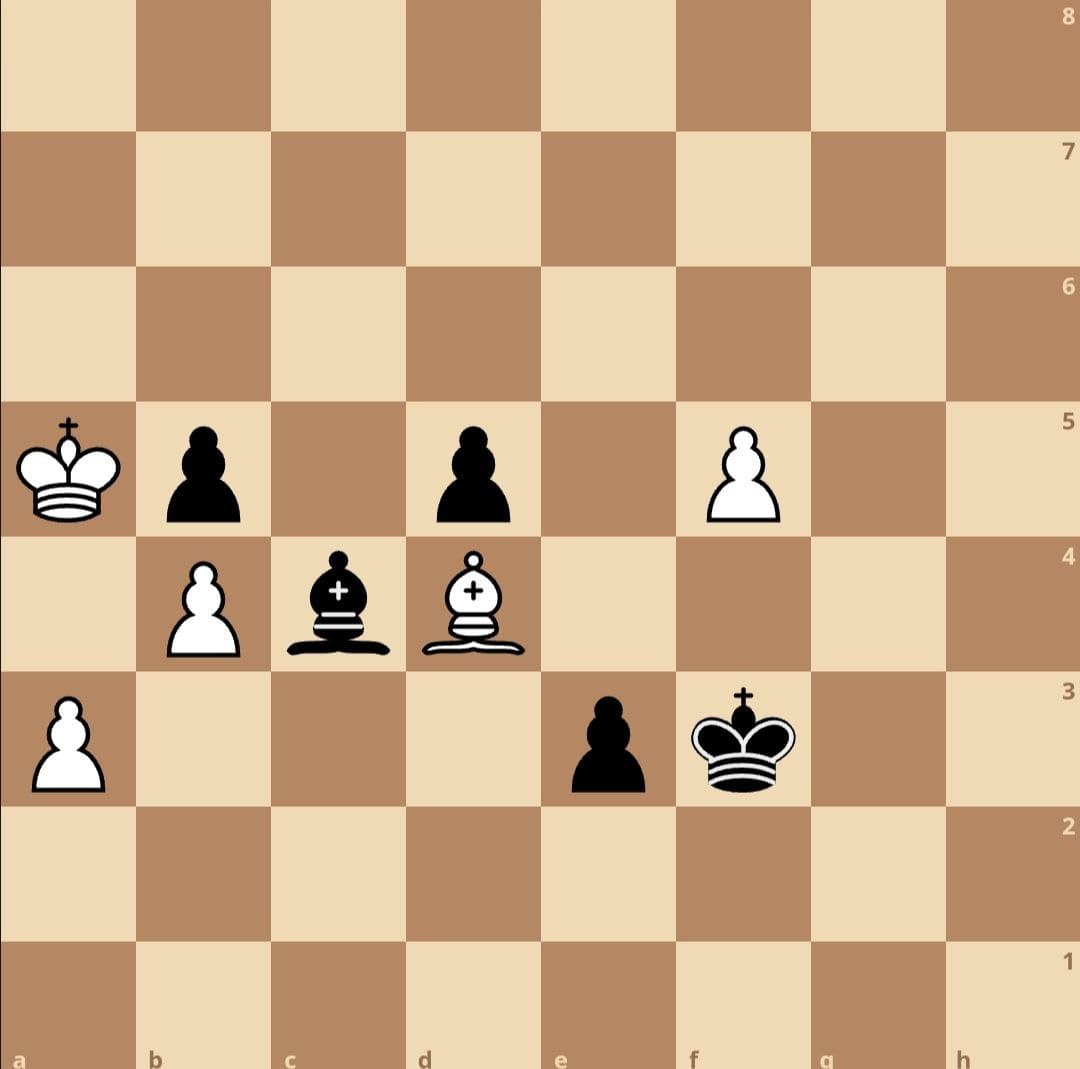 Once again, we have a complex position plus a dying clock: the perfect cocktail for collapse. The position in the diagram is objectively a draw. Erroneously 60. Bxe3? was played, leading to white's defeat. How should white have played to draw? (Try to solve it and compare your answer with the solution provided below).

Announcement and Rules of Round 7 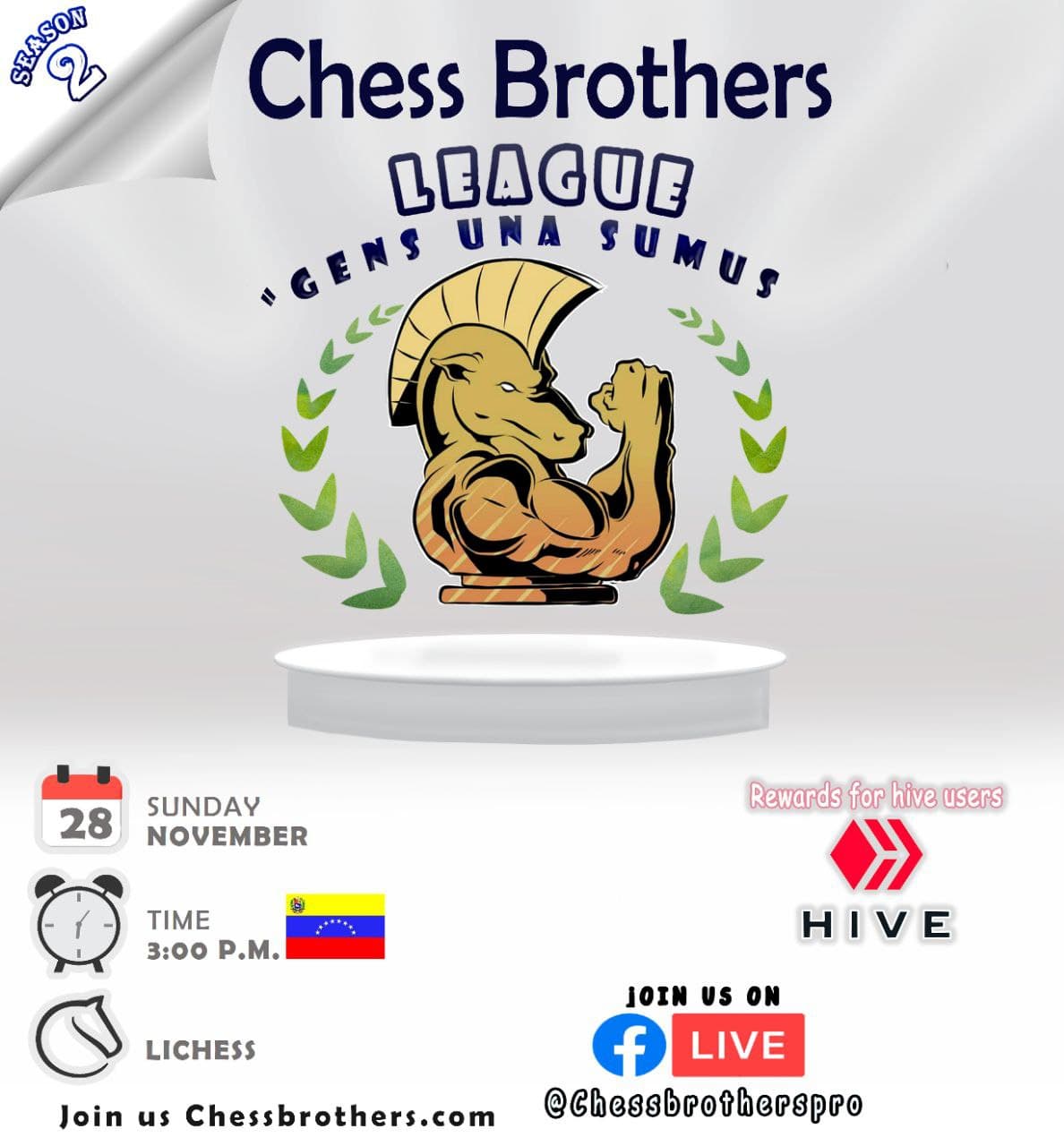 
Solutions to the Puzzles Above

Position 2: The march of the f-pawn alone was the key to achieving a draw. For example: 60. f6 e2 61. f7 e1=Q 62. f8=Q+ and White gives perpetual check. Sure, it looks simple, but in a blitz game one sometimes gets completely blinded.

We express our sincere thanks to all the users and communities that are supporters and upvoters of this tournament project.

Such is the case of The Chess Community, its leaders @stayoutoftherz, @schamangerbert and @jaki01 and its player base, who maintain an unconditional presence since the beginning of the league.

Likewise is the case of the @Aliento project and @eddiespino, whom we thank in a special way for their openness to support these chess activities on the blockchain. In fact, if you haven't heard, we have started an initiative with @Aliento called Checkmate Boredom on Hive. There will be prizes at Hive coin - check it out to participate! Finally, if you want to learn more about the CHESS BROTHERS Project, we invite you to take a look at our blog on Hive (@chessbrotherspro), our website www.chessbrothers.com and other social media spaces. You are welcome to work collaboratively with us by joining our curation trail.

See you on Sunday!

Explanatory note: The flyer of the initiative "Checkmate Boredom on Hive" is by @aliento and @chessbrotherspro. On the other hand, music from Infraction - No Copyright Music is used in the video. Its license is CC BY 3.0 . Finally, unless otherwise stated, materials such as images and videos in this post are from @ChessBrothersPro. 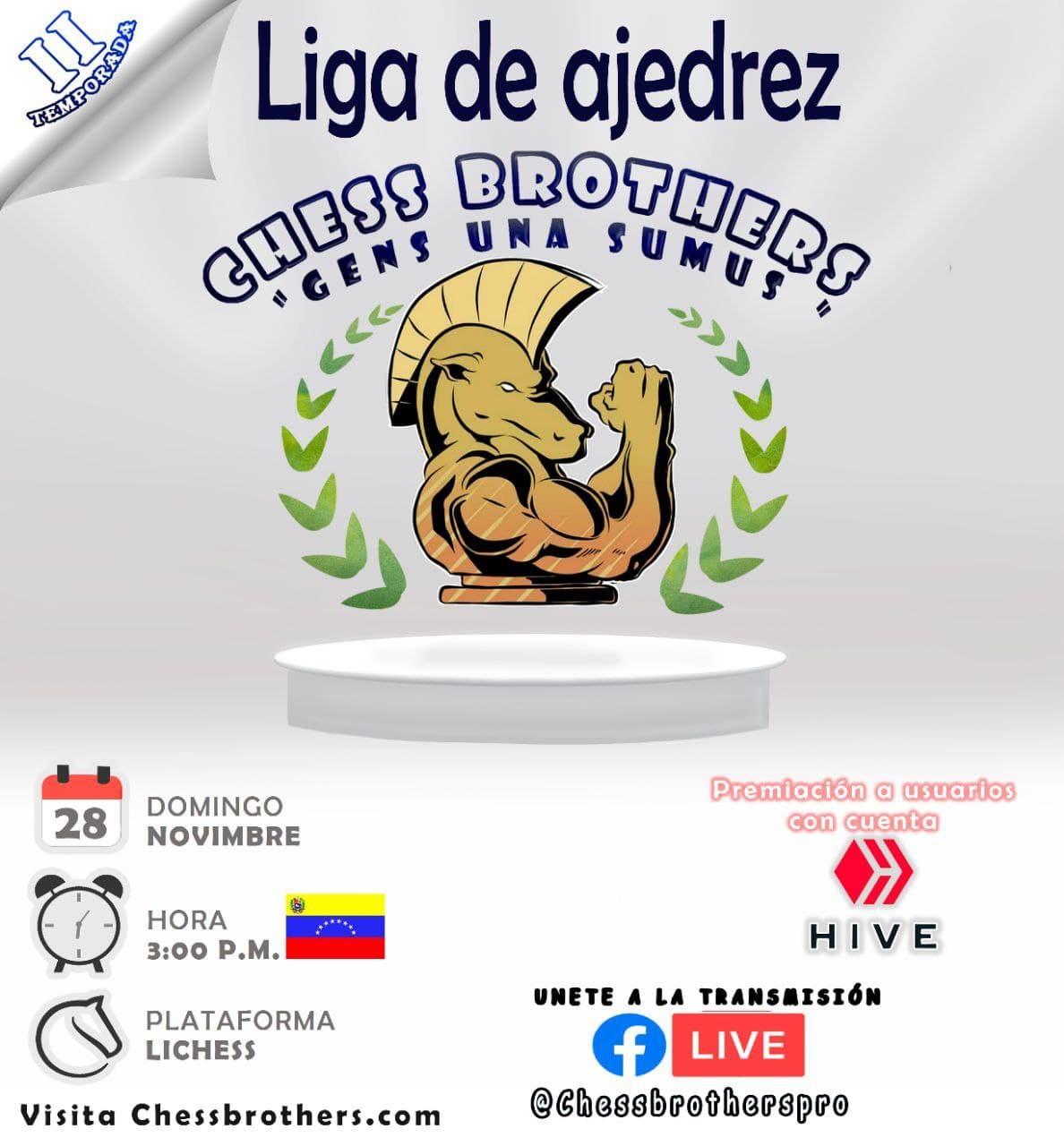 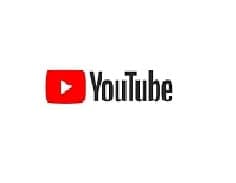 Is drinking the key to play that good ? Haha😅

Yeah! Key point, so i am not afraid any opponent! You should try next time 🤣🤝😁

Yo, I want in on this tournament, when and where? Thanks :D

@chessbrotherspro 63
about 2 months ago (Edited)

Hello @anomadsoul thanks for asking, we use to have these tournaments every single sunday at 19 GMT .

we encourage you to read this post to learn more about the details:

It's great how the tournament is going! It's brought good luck to Hive coin or vice versa, or maybe in both directions! :D

Yeah I was very lucky last tournament. I won games with stronger opponents.

Some might say it's luck but in the board there are just good moves and bad moves, in this sense you are playing better than your opponent 😊

Yes! by the way, do you have Discord?

I searched for this username on Discord and it says it doesn't exist :S

Okay, my nick is XM9000 and #4036 is my Discord ID which discord uses to distinct two accounts with the same nick on the same channels I think.

Thank you sawko! Long time no see you, i took advantage of an opportunity when you off 😁

Congratulations @chessbrotherspro! You have completed the following achievement on the Hive blockchain and have been rewarded with new badge(s):

I couldn't have seen Rb8 because i was playing the ending angrily because I threw my advantage early. @Tungphong makes life difficult on the board hahahaha. Great report!,I'm glad the numbers are increasing and also for a 3rd place finish. Here is my tournament report.