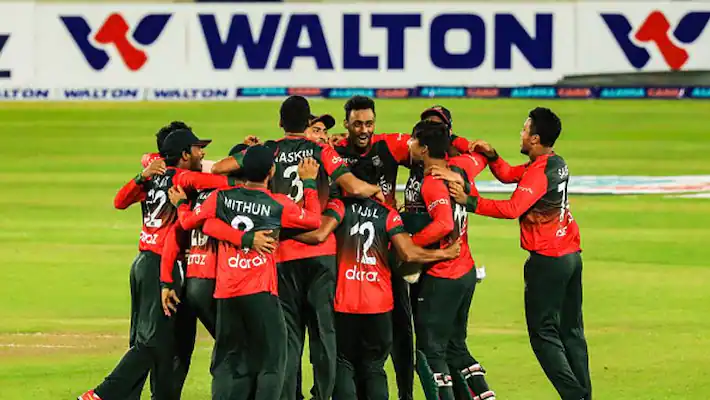 The upcoming T20 World Cup will start from 17 October. That's why every country already announced their squad who got place to play this world cup. Bangladesh is one of the countries that got a place in the World Cup. Bangladesh also announced their squad for this. In this year T-20 world Cup will be held in Dubai and Oman combinedly. Bangladesh is already in Oman to adapt to the environment and play some warm-up matches. Yesterday Bangladesh took to the field against Oman-A to improve their preparations for upcoming matches. Bangladesh's performance in that match was extraordinary well.

The game is held in AL Amerat Cricket Ground. The Omani team won the toss and invited Bangladesh to bat first. Md. Naeem and Liton Das started batting for Bangladesh team. Bangladesh made a great start holding the hands of the openers. They scored 100 runs in just 11 overs. Opener Liton Das scored a brilliant half-century (50 runs). Then, Oman's player Shrivastava's took a great catch and Liton Das gets out and returned to the dressing room. Then left-handed batsman Soumya Sarkar came to batted in one down.

Sommya Sarkar was dismissed for 8 off 8 balls with 1 six in a very short time. After this, the failure of Mushfiqur and Afif Hossain slowed down the pace of run rate. But at the other end, opener Naeem Sheikh picked up his half-century, keeping the team in the match. After a while, Naim Sheikh take rest by scored 64 runs of 53 balls with 2 sixes and 3 fours. At the end of the match, Nurul Hasan Sohan's extraordinary innings gave Bangladesh a huge total of 207 runs. Nurul Hasan Sohan made 49 off just 15 balls, where he hit seven huge sixes. Liton, Naim and Sohan's batting was commendable. The performance of the Oman’s baller wasn’t good at all.

Nasum Ahmed took wicket for Bangladesh at the beginning of the balling. Oman-A’s batsman Akshay Patel returns to the dressing room before opening his account. In the whole innings any Oman’s batter could not play well without Shoaib Khan. Oman-A team scored only 147 runs by losing 9 wickets in 20 overs. Bangladesh won the match by 60 runs. Shariful Islam and Saifuddin bowled brilliantly for Bangladesh. Sariful took 3 wickets and Saifuddin took 2 wickets for the team. Others also bowled well in this match.

Bangladesh's performance in this practice match was extraordinary. Everyone played very well in all three departments. I hope Bangladesh will maintain this form in the main round of T-20 World Cup. I think , the matches will be very enjoyable for the spectators of Bangladesh.

Congratulations @fa-him! You have completed the following achievement on the Hive blockchain and have been rewarded with new badge(s) :