Hello and welcome to all the readers

CSK won the toss and elected to bat

CSK started well. A good first wicket partnership of 74 runs in 9.1 overs. CSK had good partnerships and finally scored 191/4 in 20 overs
The main highlight was a 37 run last over courtesy of Ravindra Jadeja, unbeaten on 62 runs. Jadeja was dropped when he was on zero, which costed RCB dearly.

In reply, RCB started well and were 52/2 in first five overs. After that everything went downhill. RCB lost wickets at regular intervals. RCB managed only 122/9 in 20 overs.

CSK won the match by 69 runs

RCB dropped too many catches. Bowling was good until the last over which went for 37 runs allowing CSK to post a good total.
RCB batting collapse in pressure. Today the star players did not bat well. RCB need to find a balance in their middle order.

CSK batted and bowled well. But the star was Ravindra Jadeja who batted brilliantly at the end, bowled well and also played part in a run-out.
Overall as a team, CSK is improving after every game

DC won the toss and elected to bat

DC scored 159/4 in 20 overs. Which included a good first wicket partnership of 81 runs.

In reply, SRH start was not bad. Lost first wicket to a crucial run-out. SRH lost wickets at intervals. Kane Williamson who scored 66 not out, did not get support from the middle order, wickets kept falling.
But, in the last over, SRH manage to tie the score to 159/7

Then, we had a super over, 1 over per team.
SRH batted first and scored only 8 runs. 1 run was deducted as batsman did not complete a run properly.

Needed 8 runs to win, DC managed to scored the final run on the last ball and win the match

DC won the match by super over

The batting woes of SRH continues. SRH captain, David Warner is also not performing. The only batsman who played well and sensibly was Kane Williamson.
Middle order did not play sensibly. 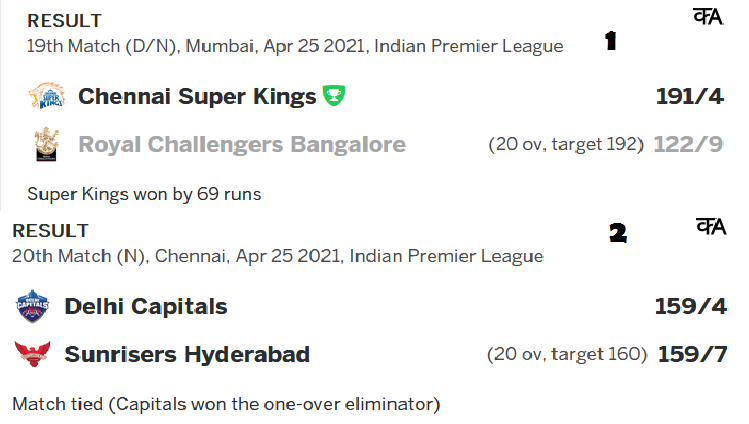 With today's win, CSK is on the top of the table.
DC are on the second place. Whereas, RCB has dropped down to third place.

Still, lots of games to be played.
Matches at mumbai and chennai are over.
Next set of matches will be played in Delhi and Ahmedabad.
Lets see how the teams perform.

Congratulations @imfarhad! You have completed the following achievement on the Hive blockchain and have been rewarded with new badge(s) :