After the Jayson Tatum and Boston Celtics beat the Miami Heat in a long and awesome fashion, the 2022 NBA Finals is all set!

Does Celtics have a chance against Warriors?

The Celtics have been seen in the NBA Final since 2018 and they are facing a Finals Veterans with young guns that are as good as there vets! It's gonna be a battle with experienced final team versus a high quality team, but the question, can they survive?

here is some team matchup out thrown out there. 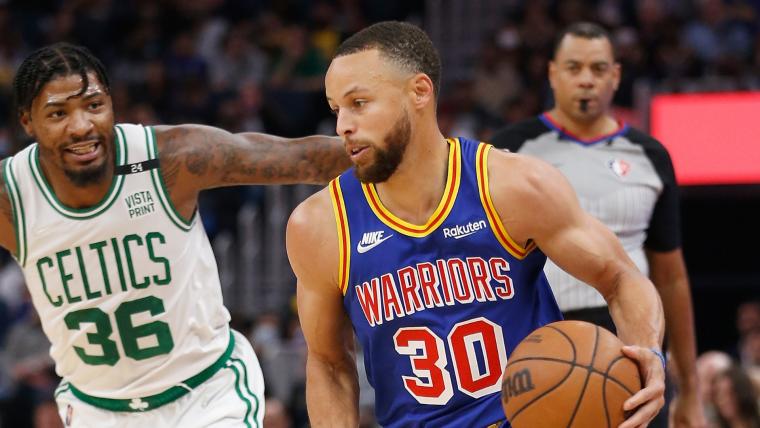 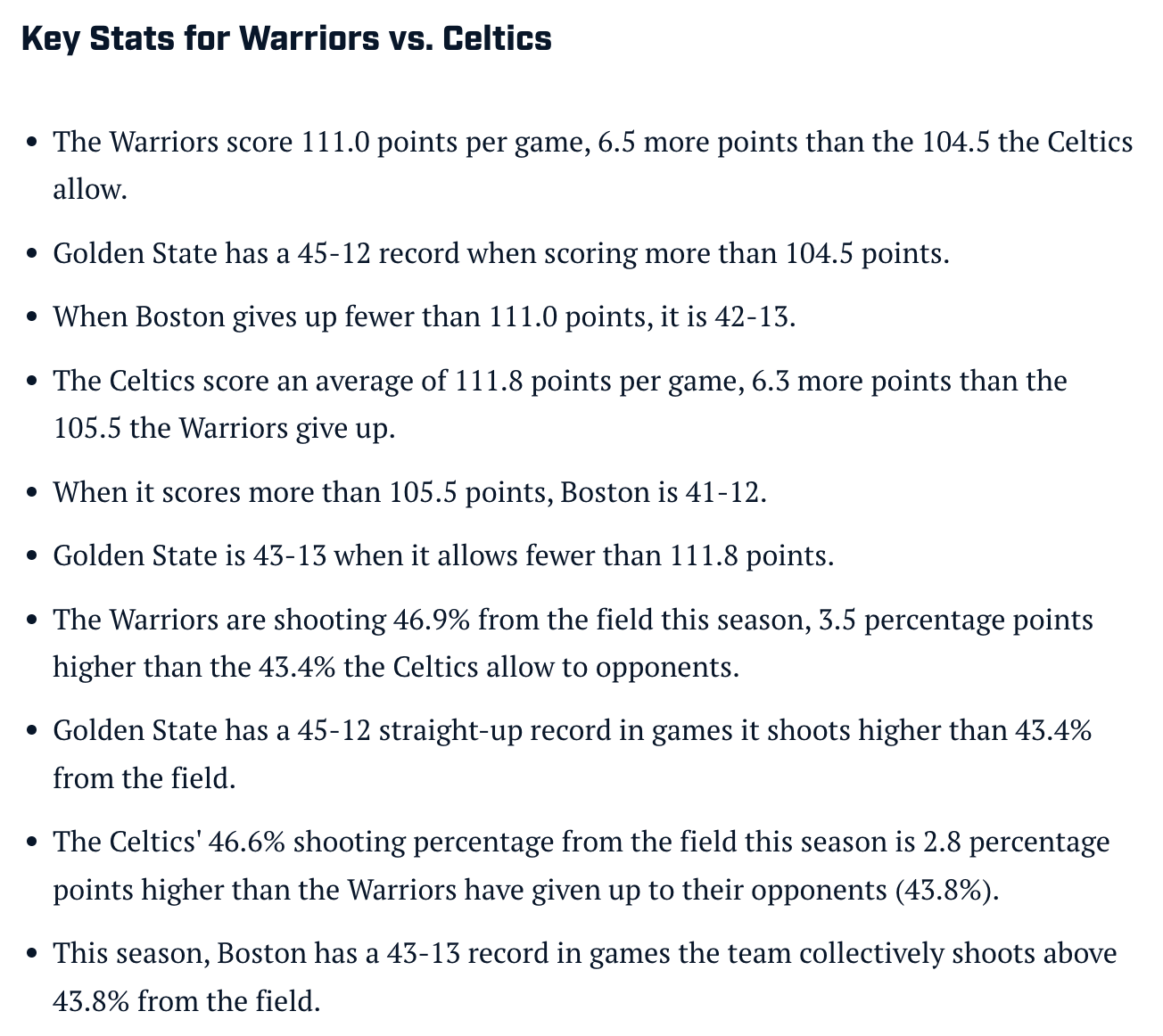 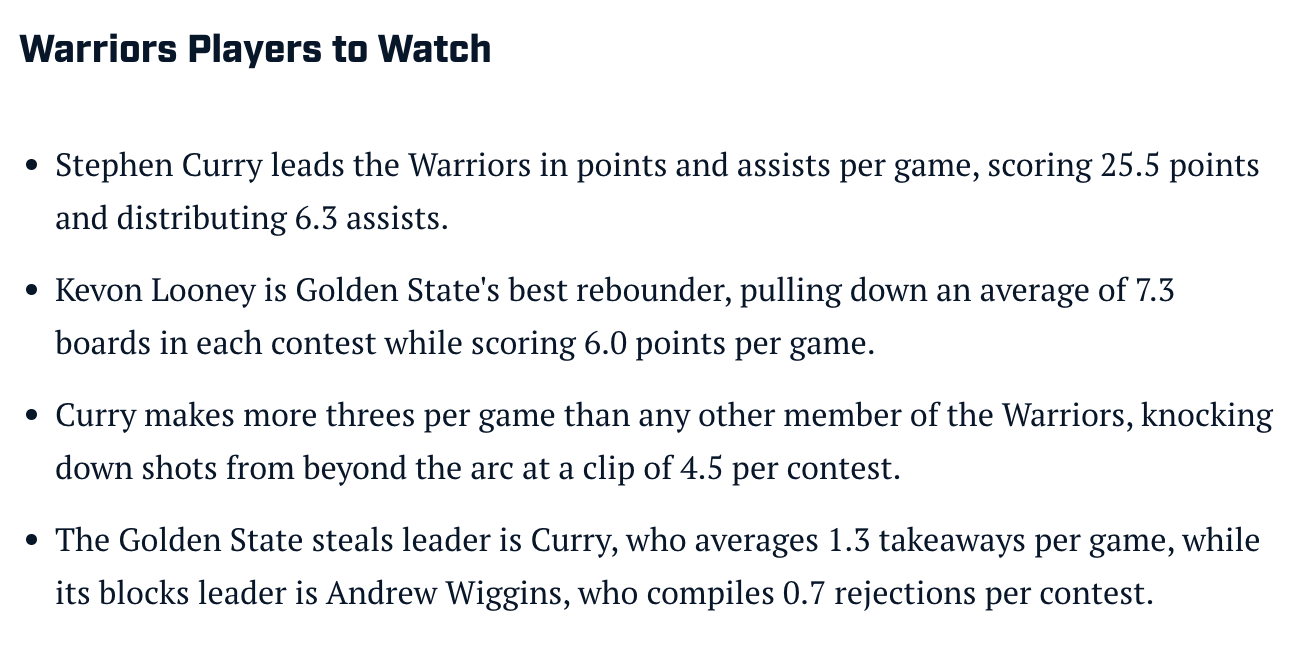 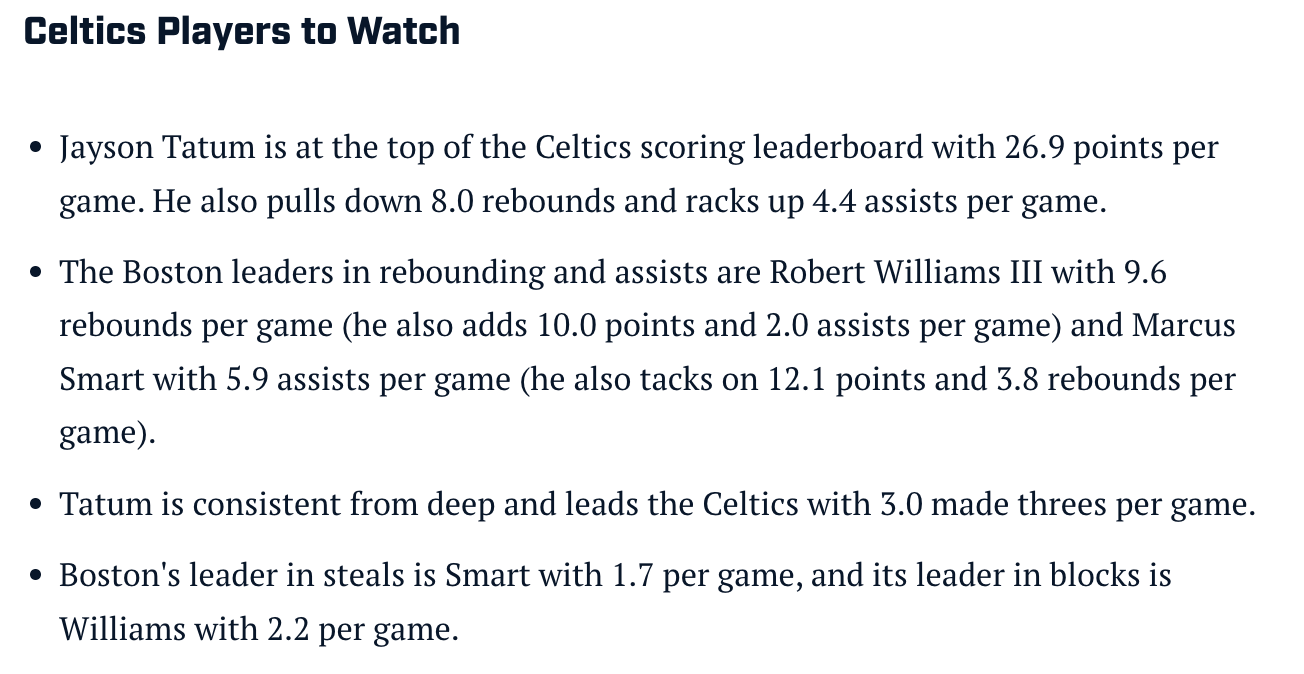 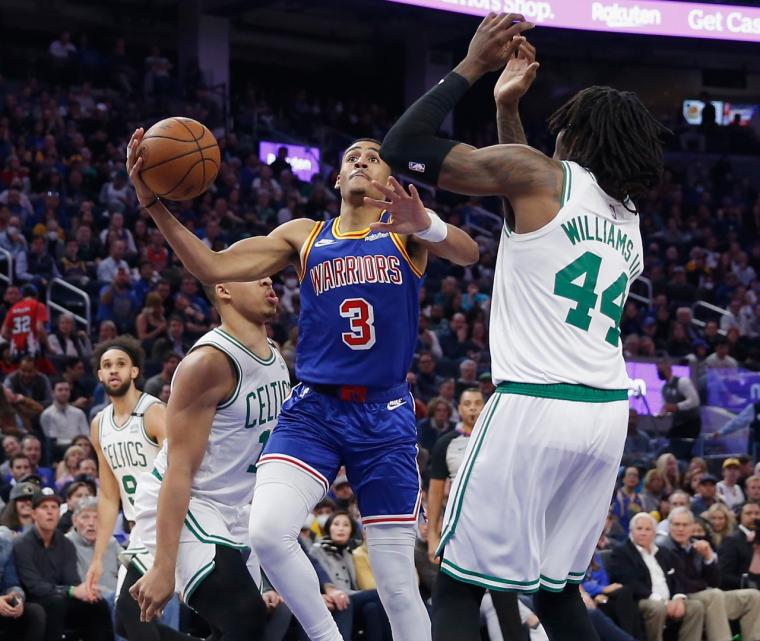 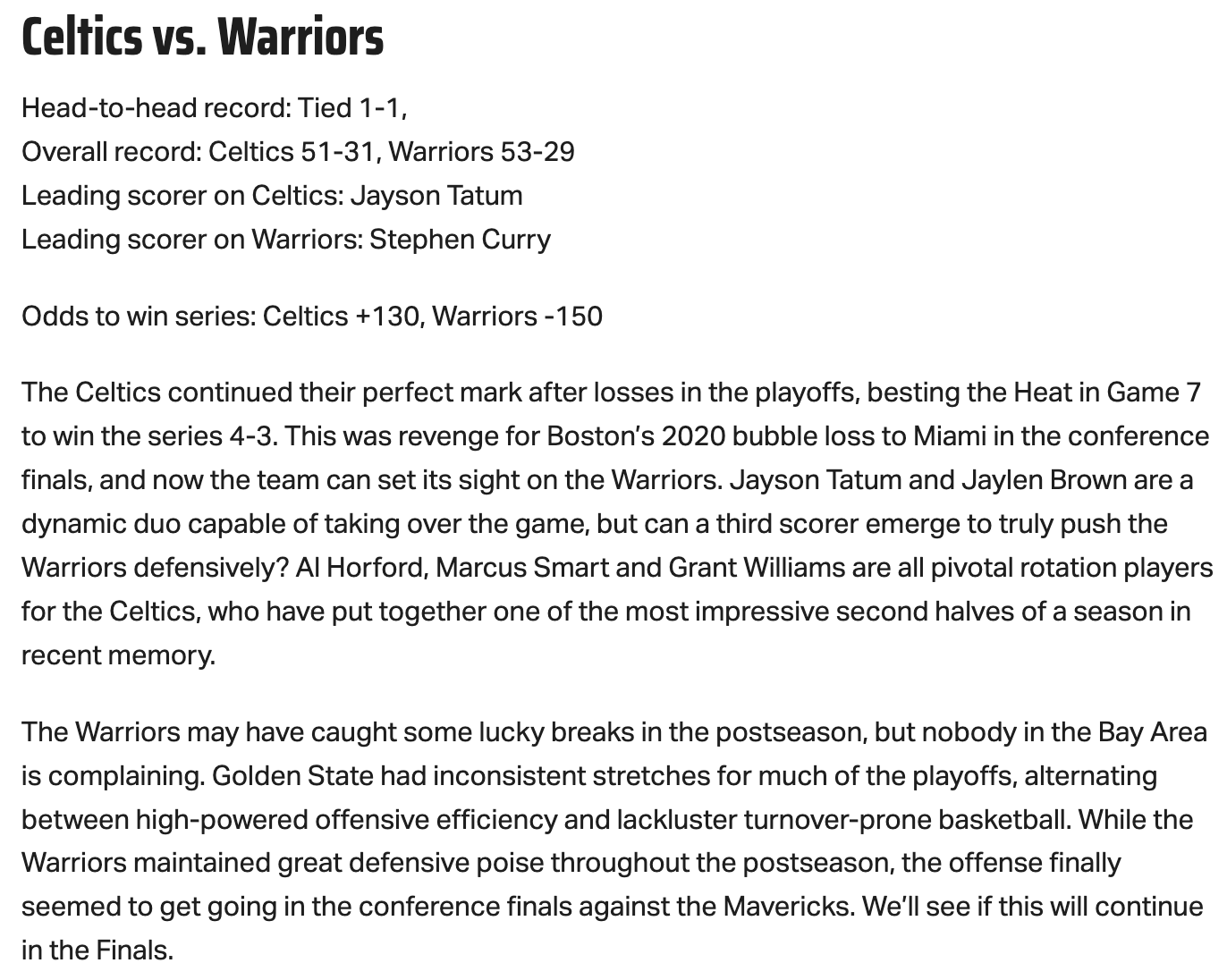 How will Stephen Curry fare against the 2021-22 Defensive Player of the Year?

Marcus Smart made headlines when these teams matched up in March, injuring Curry on what Steve Kerr later deemed "a dangerous play." Prior to that injury, Curry had missed three of his four field goal attempts and committed four turnovers.

Curry has had his explosions against previous versions of the Celtics, though. Last year, he dropped 47 and 38 points in two close losses.

This year's Celtics defense is different. They've been one of the best defenses in recent memory in the second half of the season and NBA Playoffs. Curry will face more switches, better overall personnel and much more dynamic rim protection than he has thus far.

Smart will likely be the main guy on Curry, but the Celtics don't have any weak defenders to target in their starting lineup. Curry is going to have to work for everything.

Points in the paint. The Warriors were able to feast off the Mavericks' lack of rim protection, averaging nearly 50 points per game in the paint throughout the Western Conference Finals. As a frame of reference, the Heat, Celtics and Mavs averaged between 32 and 40 in the Conference Finals.

The Warriors get a lot of attention for their 3-point shooting prowess, but rim pressure can create open looks for their shooters. The Mavs weren't able to show big bodies when the Warriors got past their first line of defense. They also made too many mistakes in communication guarding the Warriors' split cuts and movement-heavy offense.

Can the Celtics, a switch-heavy team susceptible to slips to the basket, make less mistakes off that player movement than the Mavs did? They have more defensive talent, but it is going to be the mental errors that they have to avoid. 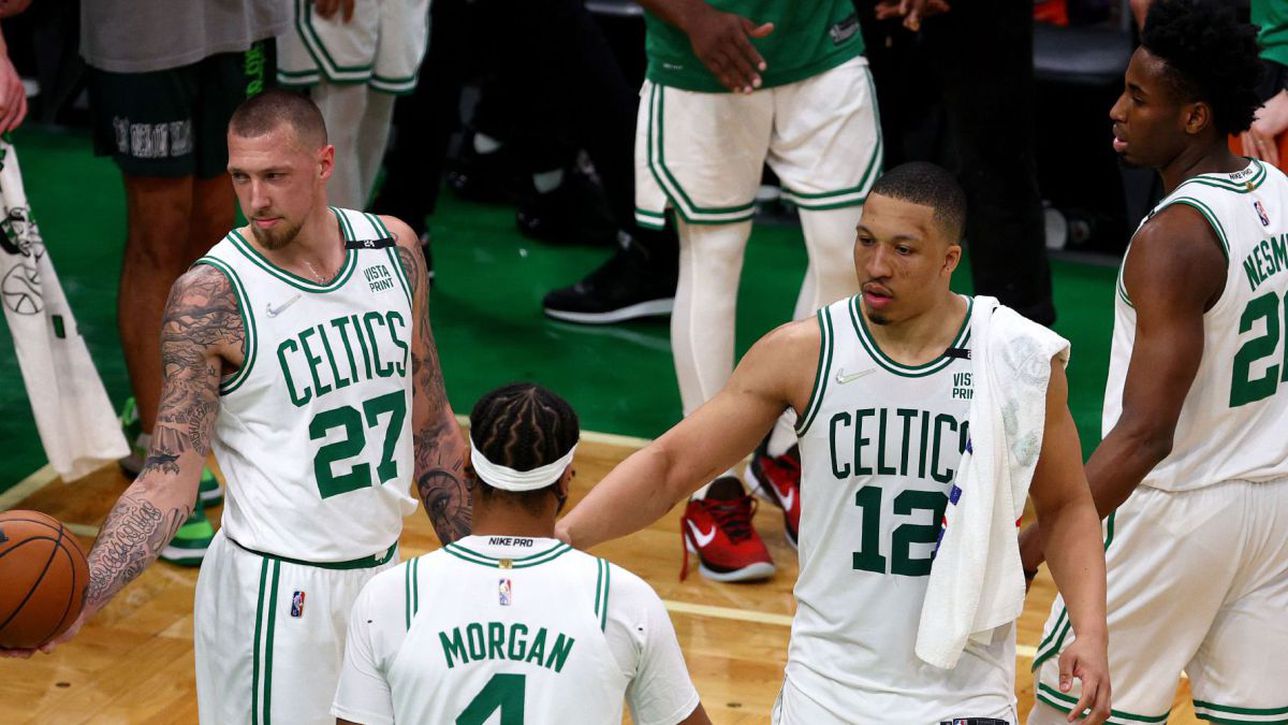 Can the Warriors hide him? They tried having him show aggressively on ball screens in their series against the Mavericks, and he could not execute that coverage properly.

Will they stick with that plan? Or will they cook up something new to prevent him from getting ruthlessly switched onto Jayson Tatum and attacked? Robert Williams. How well can that surgically-repaired knee hold up?

The Celtics have looked like a different team when he's been on the floor. His rim protection and defensive rebounding are game-changing. That rebounding is important given how surprisingly effective the Warriors — and Andrew Wiggins in particular — have been at crashing the offensive glass.

Williams has covered immense amounts of space to clean up all of the team's defensive issues. He's even flown out to 3-point shooters in the corners for big blocks on the perimeter.

If he isn't constrained by any sort of minutes limit, then he is going to take that Celtics defense to the next level.
Source: Sportingnews

My Thoughts, Your Thoughts?

My Thoughts? I believe GSW have the best advantage here, they have the two of the best shooters in the league, the have defensive veterans, they have a very consistent and game finishing rooks.

WHats your thought? Who you got?
Comment below and let's talk about it.