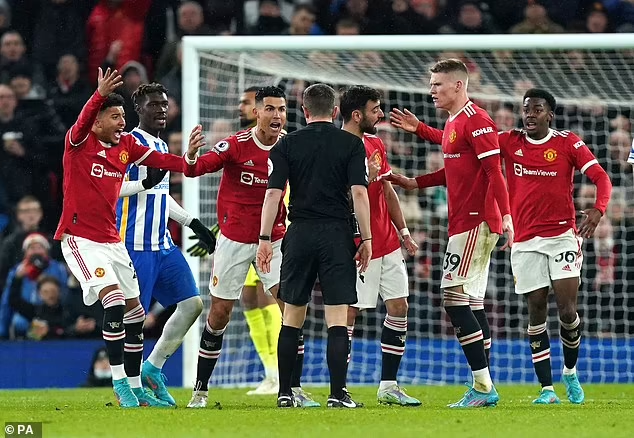 Feels a lot like the last 6 after just one game.

A team full of attacking talent, that have no gameplan, can't defend and lose games that they should be winning easily.

Maybe but he would want to learn how to drive the car first.

How he can leave Harry Maguire as captain and as a starting center back is beyond me. He can't defend. He is just a big head on two legs that shoould be playing for relegation fodder.

I know that it's still early and I'm hopeful that he can turn the car away from the cliff it's heading towards. Because if he can't get the team motoring properly then United will fade out of the top european teams where they are just about hanging in at the moment.

United are a big enough institution to ride out the rough times but there is another generartion coming up now. A generation of kids that are esupporting Liverpool and Man city the poor unfortunates.

They won't know any better since they will grow up thinking that these performances are the norm.

Ronaldo on the bech and did make an impact when he came on the pitch. I don't know if he will be here for the full season but he will score goals if he does.

To be fair to the team when the wen't on the attack they were impressive and in Erikkson they have a worker in midfield with a touch of class.

He is getting on in years but has the right attitude at least. Fernandes spent more time on the ground than on his feet.

It looks like it could be another tough year for the team with a struggle to get near the top four. And without that you are falling back alittle further every year.

I think this was expected as the majority of the team is still there and makes no sense. Where is the rebuild? No wonder players don't want to go there as it is a dead end alley with no future.

It's going to be a long season with our best bet a full rebuild over the next summer. He did cut a lot of dead wood which was good to see but hasn't brought in real quality or a strong defense.

You used a Getty image and could have used a few others if you want to change it as Getty is not allowed. there are 2 others which are AP and PA which is ok.
https://www.dailymail.co.uk/sport/football/article-10520165/Manchester-United-charged-FA-players-reaction-Dunk-tackle-Elanga.html

Thanks @cryptoandcoffee. Didn't even know that it was a getty image or that they weren't allowed.

I changed it there straight away. Sound for the heads up.

Indeed united hasn't changed even with the great work done in the pre season tour but for me I would say they definitely have loads of work to do before meeting with more dangerous teams. The season is just starting

United aren’t a team, they are a bunch of individuals. Brighton by contrast were far superior particularly in the first half with their collective organisation and work rate.

United will need to back a manager for several years to undo the problems they’ve caused themselves but I just don’t see them doing that with the way the club is set up at the moment,

You can't win anything with Fred and McTominay in midfield and Maguire playing in a high line. Man Utd is just using good PR to shout about a rebuild that is nonexistent.

I guess ETH just found out the hard way yesterday that he overestimates these players. And where is the high press we saw in preseason?

I think everyone is overrating this team. The team is bang average and doesn't have the talent of Tottenham, not to talk of City or Liverpool. Asides a 37 years old Ronaldo and the struggling Sancho, I doubt if Rashford, Martial, Elanga and whichever attackers left in that team will come near the starting 11 of any team in last season's top 4.

As for the midfield, the less said, the better. Fred and McTominay are very ordinary, hard working player. They epitomize what that team is - average.

Asides Varane - who came in with a lorry load of trophies - the remaining defenders should be playing for Nottingham Forest. A bunch of confused guys. Martinez actually caught my eyes yesterday. Will be watching him closely.

De Gea? Pathetic! He gets paid £330,000 per week to stay on the goal line and save shots only. He will never command his area, doesn't come out for crosses, can't pass the ball to save his life.

Joe Hart was labelled as one of the best gk in England until Pep arrived and ditched him for Ederson. Alisson came in and made the shift in gk standard more glaring.

A gk who plays for a team that is expected to dominate possession should be able to pass the ball, alert defenders whenever they leave dangerous spaces behind, and sweep when opponents try to exploit the spaces. De Gea is nothing but Joe Hart Pro Max, and that's even up for debate!

So, this Manchester United team is filled with a bunch of guys who tricked the desperate board members to get fat wages. They are not top class talents.

And they've conceded 6 goals in the last two games against Brighton, in less than 6 months, scoring just one, an own goal, in return.

Brighton did a beautiful game. But Man United for come out of this mess, the must learn from the mistake of last season. Christiano Ronaldo has what it takes to deliver the team but he needs others to make it happen. Thank you @niallon11 for this

United has been off these last few years, since Fergie left its just not been the same. Every big club has a rough patch, and though united's is a bit longer, I believe they'll come back. Eventually.