The sport of kings. 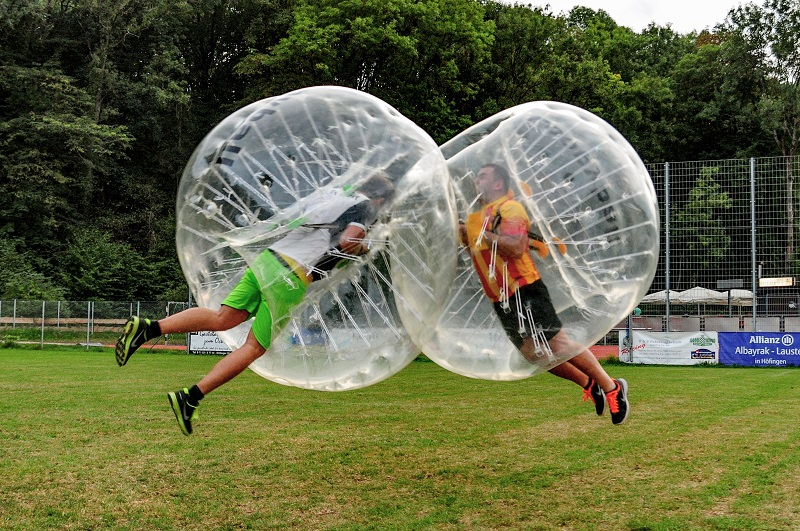 This was a first for me but a very fun way to spend an hour.

We were up in Kilkenny on a mates stag do and he has wanted to do this for a very long time. A big mistake really as he was pretty much a walking football himself that got battered around the place.

The day itself was roasting hot so squeezing ourselves into big rubber tubes to run around a field for an hour was tough going.

There is a hollow rubber ball with a tube in the cneter. It has two handles on the inside to keep yourself steady and straps like a backback.

Then when your inside they have a few safety rules like not playing the man off the ball and keep your feet on the ground but those only lasted for the first couple of minutes.

After that it was a total free for all with bodies flying everywhere. we did try to play the ball but as soon as you got anywhere near it there were two to three massive angry lads coming down the barrel at full speed.

Great fun all around.

The best way to make impact is from the side when they are all ready moving. That way they have no chance to stay upright.

If you hit from the front they can brace and take the impact but from the side or back you are an open target.

It's good to build up a nice head of steam if you can and really make it count.

We had six a side on a small grass pitch so the impact wasn't too bad. You could still feel it when you hit the knees but most of the impact was taken by the bubble.

Unfortunatly for the groom to be he took the most impact as he had a target on his back the whole way through.

It was a very fun way to get started on the weekend and i would definitely do it again.

Something different to the normal sports and a bit of activity before the drinking.

We had some plans a few years ago to do this, but the weather decided otherwise. So we did play some regular football with a torn muscle as result! I know, I am getting gold.

never knew there was something like that, but it seems like fun. i dont see it being dangerous

You didn't see us playing it.

It was dangerous enough.

Is there Premier league for this?

Not that I know of but i as thinking that they should set up some cameras and live stream a channel all day long.

It would definitely get some hits.

People will watch anything and I think this is more than just anything :)

Looks like this could be loads of fun if you have a group of mates together.

We had 6 v 6 for a stag weekend and it was a great laugh.

A good way to get to know everybody by trying to kill them.

Doing some type of activity normally works as we normally end up paint balling or something. This looks great though and a good way to get to know each other.

Deadly craic, I did this one a stag too a few years ago and the rules went out the window after 5 minutes and sure the lads running the thing were as rowdy as anyone, knocking fellas over and laughing away at all the carry on.

I tried this once, I admit that it gets me dizzy, and it gives me some aches on my body too! But the experience is surely a lot of fun.