JOSE MOURINHO - The Special One The special one does it again. As Roma finally broke the jinx after lifting the UEFA Europa Conference league in its inaugural season. In what seemed to look like a football match that was heading to penalties, Zaniolo had other ideas as he gave his team a precious lead with a wonderful finish. His goal turned out to be the title clincher. 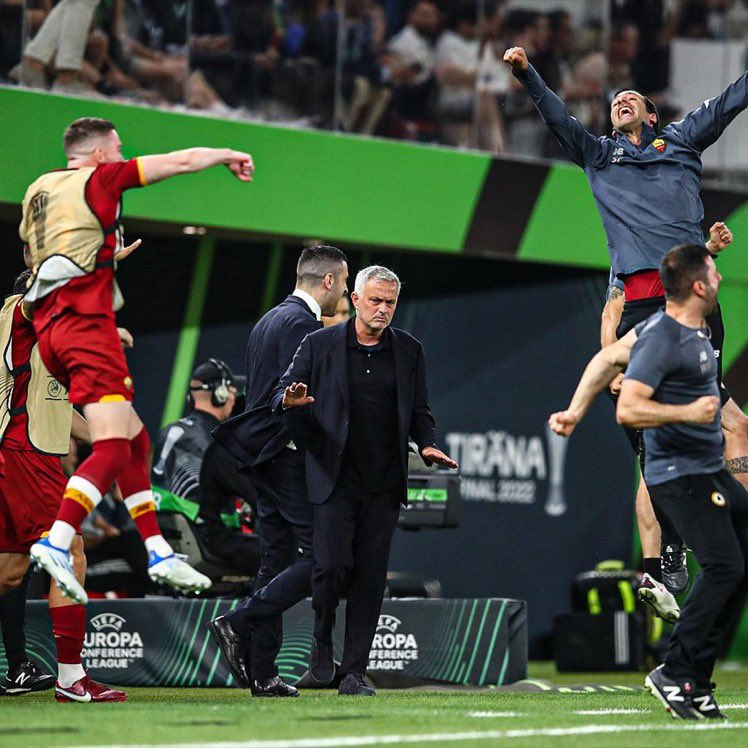 Jose Mourinho becomes the first manager to win the UEFA CHAMPIONS LEAGUE (which he won with Porto), UEFA EUROPA LEAGUE (which he won with manchester united), and now the UEFA CONFERENCE LEAGUE (with Roma). You would probably say it's the first season, so it makes sense, but I don't think Pep or any other manager of the top teams would want to qualify for this tournament. Tell that to Roma. They are completely ecstatic. Almost fourteen years without a trophy, and along came Jose, and now all that is history. Although Zaniolo was the one who scored the goal that gave them the title, many Roma fans would probably be thanking other players more for the victory. Rui Patricio may be the star man of the show with a stunning fourteen saves to keep Feyenoord out. Tammy Abraham too has racked up goals all season to get them to this point, and still was a constant threat in the opposition's backline. The most notable has to be Chris Smalling. The Englishman looked like a player reborn. His clever defending and clearance all game can not go unnoticed. I think you all will agree with me now that Jose Mourinho is truly the special one with this masterclass.,

Wanted Feyenoord to win all because of Nelson lol but them just then..
I must say jose is really a special one.

Wao seriously Roma had 14 years without winning a title, that seems to me a more than surprising fact, we know that this club has a lot of history and has always been one of the most competitive, but I never imagined that it had been so long since the last trophy.

This record that Mourinho has just won, will be for a long time, because indeed I do not see other elite coaches, wanting to compete in this new competition, equally Mourinho in every team that goes, leaves its mark and although it is not the same as before, it is still the Special One.

Roma have only been coming close, finals, semi finals, etc but Jose finally did it for them. 😌

Thanks for stopping by bro

Exactly what it did 🙏🙌