It's amazing to have completed 70 seasons playing Rabona game built on the Hive blockchain. It's been an all 70 seasons of fun accompanied with experience and wealth. I love sports, particularly soccer, but more on the screen. I had an addiction with console soccer games years ago and literally spent all my cash playing it. It was cool that I found another expression of soccer, this time, that adds to my wealth. it's on Hive, it's Rabona Soccer manager.

As at the end of the 70th season, my team, FC Creativians had covered 2,100 matches and won 52% of it. Growing from a 100 capacity to 23,000 stadium capacity alongside other asset growth has been a fun but critical journey. Being able to stay in the game for 70 seasons profitably is an amazing stride. 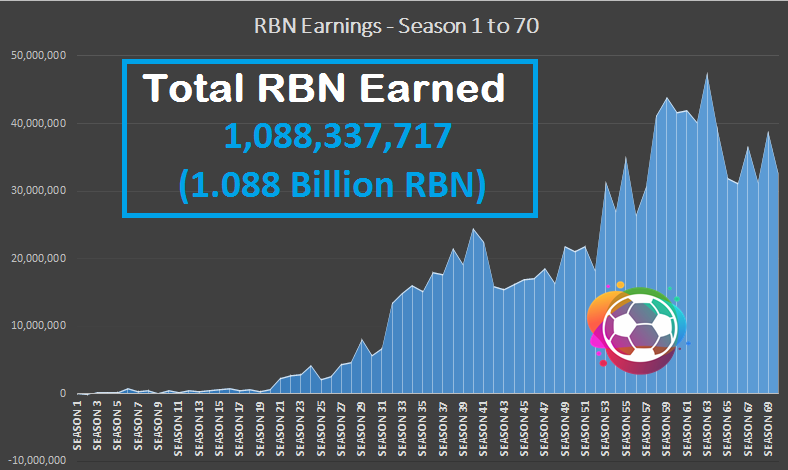 I am excited to announce that over the 70 seasons, FC Creativians has earned 1.088 Billion in RBN rewards. As captured in the above graph, it's been a growing earning journey. In the first Three seasons, my team was running deficit in net RBN rewards. However, we moved to a positive balance from the 4th season and we've been constantly going forward from thence.

While expenses over the seasons have been growing, with a careful combination of factors in management, we've stayed profitable in the game and we still thrive. 1 Billion RBN may be worth pizzas as at today, but we see Rabona game in its formative years and look forward into the future. Earning as much RBN as possible is way cheaper than buying them Five years from now.

My team is a record of a profitable Play2Earn gaming experience on Hive. We've cashed some hundreds of dollars already, but will HODL more into the future when each RBN would be worth at least 1 Cent.

It is interesting that over the last 70 Seasons completed, FC Creativians marked several milestones in terms of RBN earnings in the course of engaging the Rabona game. Below, I made a selective screenshots of the seasons and net earning records that marked milestone earnings. 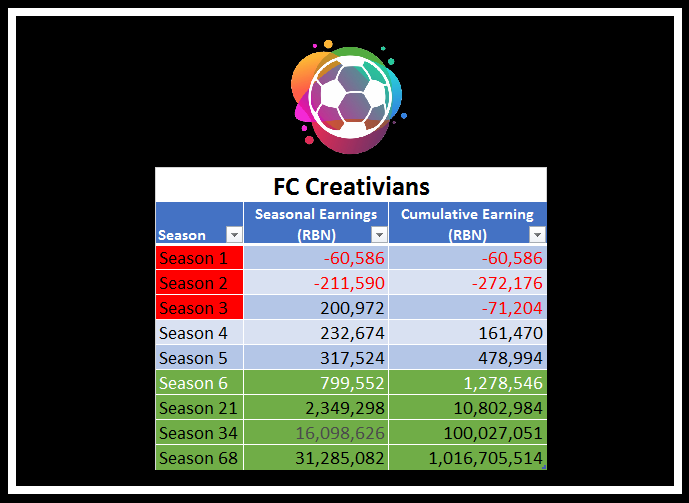 It has been an arduous journey and the success was never achieved in a day. 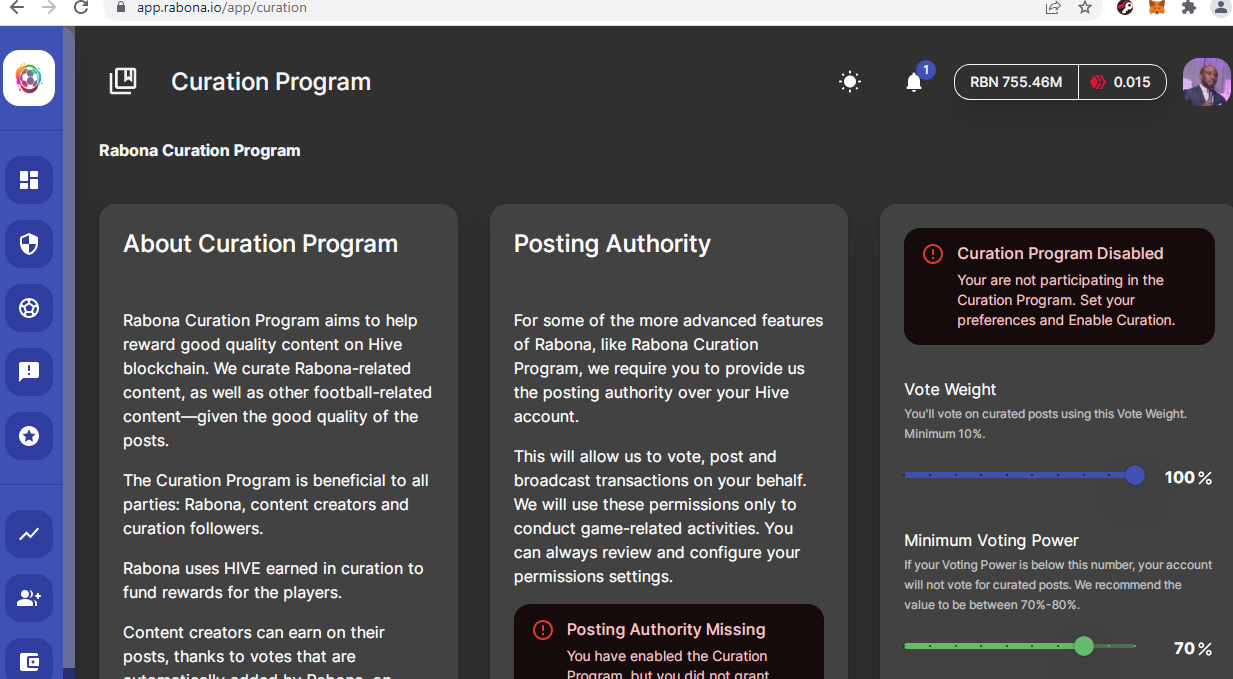 You can join the Rabona Curation trail here. It's an amazing creation within the Rabona website to see the curation project linked to the game itself.

Rabona game is an interesting soccer manager game. Every player is expected to do some daily tasks such as training team, setting formation, and allocating players for each day's set of matches. At the end of each season, a user is expected to renew player and advertisement contracts. In all, earning RBN token from a few set of activities is just something awesome. The past 70 seasons completed has been amazing with fun and wealth. 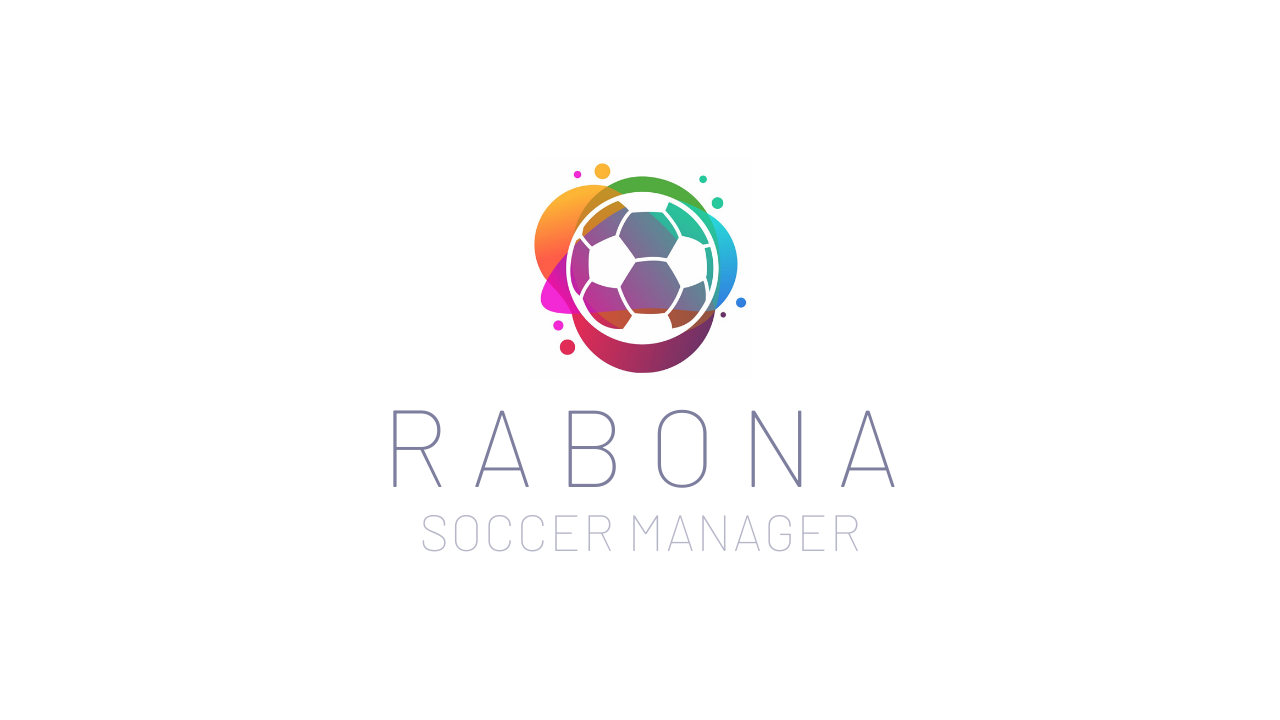 The operators doing V2K with remote neural monitoring want me to believe this lady @battleaxe is an operator. She is involved in the same discord groups around @fyrstikken and friends. Her discord is Battleaxe#1003. Shes in some groups with seemingly detached characters that dont even acknowledge the others in the group, looking oddly staged. She starts projects and does nothing with it or the delegations after its used to sway people. Like @steempowertwins does<------fake along with her @teamgood <------fake. No substance in her comments and has a following that adores her for what? Life coach she is not nor is she insightful with any meaningful skills to follow. Ruler of pixie dust maybe? I would like for someone to show me but probably wont out fear maybe? @fyrstikken groups around him down voted me into censored and not viewable on my accounts as soon I told what they were doing.
I cant prove @battleaxe is the one directly doing the V2K and RNM. Doing it requires more than one person at the least. It cant be done alone. She cant prove she is not one of the ones doing V2K because she cant and could care less. I guarantee she knows this is going around and still wont prove it because she cant. Many of us here can prove what they have been doing to survive the past 5 years. What does she live off of? It definitely isnt in public view here.

I was drugged in my home covertly, it ended badly. They have been trying to kill me using RNM with applied V2K mental games while revealing as many accessories to the crime as they can. I bet nobody does anything at all. Ask @battleaxe to prove it. I bet she wont. Pretty serious accusations to just blow off and leave the crypto community hanging in fear of this danger.

They want me to believe the V2K and RNM in me is being broadcast from her location. And what the fuck is "HOMELAND SECURITY" doing about this shit? I think stumbling over their own dicks maybe? Just like they did and are doing with the Havana Syndrome. They should start by looking at the communications between the top witnesses of Hive and the connection to @fyrstikken groups. Google his fucking name and see where his other interests lie around at least once maybe? The connections between @fyrstikken groups and all the exchanges built for Hive? Bet that would reveal some crazy ball less nutty shit. Homeland security should start preparing for their own incarcerations seeing how sloppy this was done. Patriot act my ass. Think we are really fools? Bad position your not getting out of. Dont be last to blow the whistle. Who will protect you?

People in and around @fyrstikkens groups are reckless and should have shown the proper media what they had before taking me hostage for 5 long torturing years and counting. That is a long time to wait for someone to die.

What would you say while having a gun pointed at your head from an undisclosed location? Have people find it? My hands are tied while they play like children with a gun to my head. Its a terrorist act on American soil while some yawn and say its not real or Im a mental case. Many know its real. This is an ignored detrimental to humanity domestic threat. Ask informed soldiers in the American military what their oath is and why nothing is being done. Nobody has I guess. Maybe someone told ill informed soldiers they cant protect America from military leaders in control that have ill intent. How do we protect locked up soldiers prevented from telling the truth from being treated as criminals? Not to mention civilians we let our leaders treat the same way. https://ecency.com/fyrstikken/@fairandbalanced/i-am-the-only-motherfucker-on-the-internet-pointing-to-a-direct-source-for-voice-to-skull-electronic-terrorism-terrorism

The way you've tracked your club's earnings is really interesting to see.

Great work, keep it up!